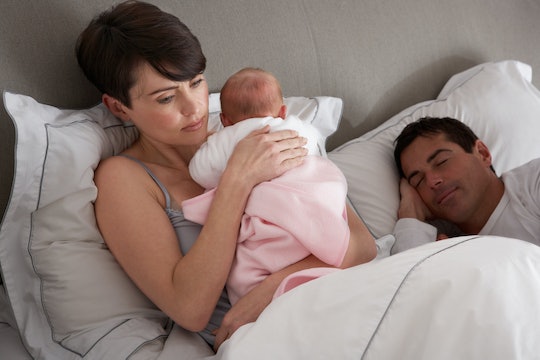 The way former couples choose to parent after separation has changed drastically over the last couple of decades. More and more are opting for co-parenting so that their children have both parents present and active in their lives. Fathers' rights groups, in particular, have pushed lawmakers to legislate such an arrangement as the standard in custody decisions, and were victorious recently when shared parenting bills became laws in Virginia and Kentucky. And like Virginia and Kentucky, more states are considering shared parenting bills. Yet, although such measures are admirable, some critics believe they may do more harm than good, especially when it comes to domestic violence.

The idea behind shared parenting is simple: Similar to joint custody, each parent would get as close to equal time with their children as possible. Although a lot of divorcing couples agree to joint custody, it's not the standard courts base their decisions on — instead, nearly all courts weigh the best interest of the child above all, according to Very Well. But fathers' rights groups, such as the National Parents Organization, have lobbied state governments to consider bills that would either encourage or make shared parenting the legal standard. Last year, more than 20 states weighed measures that would support shared parenting in some capacity, according to The Washington Post.

In Virginia, the shared parenting law, which goes into effect July 1, would require courts to formally consider joint custody equal to sole custody, according to a National Parents Organization press release. Kentucky's law, on the other hand, would make joint custody the "legal presumption" in divorce cases, WFPL reported. Although both measures leave existing provisions in place that protect domestic violence victims, critics of shared parenting bills say the legislation overall actually unravels those protections, according to The Washington Post.

How so? It comes down to the burden of proof. Shared parenting bills are stricter in nature, which means domestic violence victims would have to overcome an even tougher legal standard to prove abuse exists. But many victims of domestic abuse lack the money or resources needed to provide such evidence, according to The Guardian.

Without that proof, critics say survivors could then be forced, under a shared parenting law, into a 50/50 custody arrangement that would be harmful to both them and their child, The Washington Post reported. Mary Savage, general counsel of the Kentucky Coalition Against Domestic Violence, told WFPL:

And legislating shared parenting is still problematic even with issues of domestic violence and abuse removed from the equation. Shared parenting bills are predicated on the belief that both parents have the best interests of their children at heart. You assume that neither parent is narcissistic and that both would co-parent with respect and emotional maturity. But sometimes, parents use their children as pawns during divorce proceedings and beyond in order to manipulate and hurt their former partners in the short- and long-term. So when you approach shared parenting as the "gold standard" in a custody case, critics say you're putting the desires of the parents, however toxic, above what's best for the children.

This isn't to say that shared parenting isn't a laudable goal — it is, absolutely, so long as the parents actually get along. It doesn't matter how much research says that children benefit more so from having both parents in their lives than living with one parent. Because the number of days that a kid spends with each parent won't matter if the quality of those interactions, as well as the mutual parenting arrangement overall, is poor. And that's not something shared parenting laws can guard against.

As Robert Emergy, author of Two Homes, One Childhood and psychology professor at the University of Virginia, told The Washington Post:

Kids don't count the minutes and the percents, but they sure respond if they have a good relationship with their mom and dad or if they are caught in the middle of a war zone.