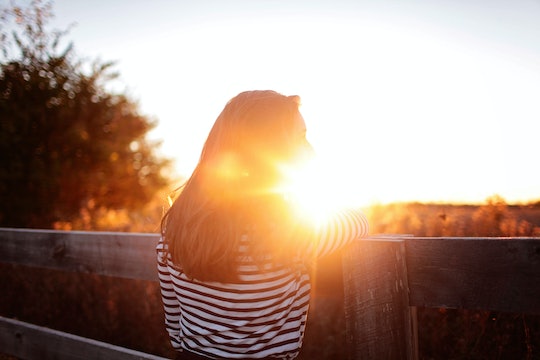 Gender-based discrimination and violence has far-reaching consequences. A new study has found that more than one in five teen girls experience sexual violence, and it's impacting their education. According to the National Women's Law Center's 2017 Let Her Learn Survey of 1,003 girls ages 14-18, "discriminatory discipline, harassment and sexual violence, and the failure to recognize and address trauma" can diminish girls' ability to "concentrate, feel safe, and stay and do well in school," and girls who don't graduate are more likely than boys to earn low wages, be unemployed, and depend on public assistance.

The survey, which was conducted in January, found that 21 percent of girls reported being kissed or touched without consent, and 14 percent reported missing school because they felt unsafe. For sexual assault survivors, that number more than doubles; 30 percent have been absent due to safety concerns. Additionally, 68 percent of sexual assault survivors reported having trouble focusing in class, and 91 percent reported experiencing symptoms of PTSD. Sexual assault survivors were also more than twice as likely to have experienced homelessness (23 percent versus 11 percent overall), and more than twice as likely to report being hurt by a family member (37 percent versus 15 percent).

Girls of color reported slightly higher rates of sexual assault compared to the overall number, while the rates are almost double for LGBTQ girls (38 percent), and a staggering 56 percent of pregnant and parenting girls report being assaulted. Apart from sexual violence, 15 percent of girls reported being hurt by a family member, and 9 percent said they were hurt by someone they were dating. The NWLC report also notes that according to the CDC’s Youth Risk and Behavior Surveillance System, 15.6 percent of high school girls who dated in the last year reported being forced into sex acts by their dating partner.

The NWLC has several recommendations for schools in order to remediate the findings, including hiring crisis counselors, providing accommodations for survivors suffering from PTSD stemming from trauma, and conducting student surveys and staff training. It also calls on lawmakers to create youth advisory committees, change the legal standards for sexual harassment in schools, enact laws to protect LGBTQ students from harassment. It also urges the the federal government to require schools to conduct annual surveys, and then collect and publicize the data. The problem can be solved, but it will require a concerted effort from everyone.