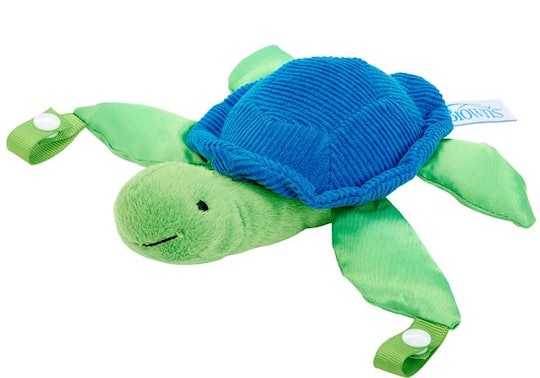 More Than 500,000 Pacifier & Teether Holders Have Been Recalled For A Potential Choking Hazard

As if there's not enough for parents to worry about already, the U.S. Consumer Product Safety Commission announced a recall of thousands of baby comfort products, many of which are very common items used by infants. More than 500,000 pacifier and teether holders have been recalled from the Dr. Brown’s line, and the items include merchandise that was sold in both the United States and Canada. Products with several different lot codes are affected, and here's what parents need to know.

Handi-Craft, the Dr. Brown's parent company, is recalling hundreds of thousands of "Dr. Brown's Lovey" pacifier and teether products because of a choking hazard, according to CBS News. A snap on the products "can detach from the pacifier’s ribbon, posing a choking hazard for young children," according to the U.S. Consumer Product Safety Commission. Parents reported a total of 67 instances of the ribbon fraying and the snap becoming detached, but thankfully, no injuries have been reported because of the problem, according to the recall announcement on the commission's website.

The loveys affected by the recall include giraffes, zebras, turtles, reindeer, frogs, deer, and two different styles of bunnies, Motherly reported. The products were sold through Bed Bath & Beyond, H-E-B Grocery, K-Mart, Target, Toys “R” Us, Babies “R” Us, Walmart, Amazon, and other stores and retailers from August 2015 until March 2018.

Dr. Brown's decided to voluntarily recall the products because "we are committed to making this right," the company announced in an Instagram post. The post made it clear that the company is taking this matter to heart, and that was also made even more clear when Romper was sent the following statement via email from a representative at Dr. Brown's in regards to the recall:

According to Jesse Lehnhoff, marketing director for Dr. Brown’s:

For more than 20 years, Dr. Brown’s has developed products that promote good health for baby – and we take that job very seriously. We sincerely apologize for any inconvenience this voluntary recall of the Lovey pacifier & teether holder may cause. We are committed to making this right and encourage all consumers affected by the recall to check the recall page on our website and contact us for a replacement.

The Instagram post noted that it's the ribbons that attach the plush toy to a teether or pacifier, specifically, that can create a possible choking hazard, because they might "fray and/or unravel after repeated use." The pacifiers included with the holders are not reportedly a part of this recall.

If someone does determine that their child has one of the products affected by the recall, they should immediately take away the recalled products, Parents reported. The next step is to contact Handi-Craft for more instructions on how to receive "a replacement product or comparable merchandise of equal or lesser value."

The Dr. Brown's Instagram post about the recall also included a link directly to a page on the company's website with information on the "lovey" pacifier and teether holder recall. The page includes contact information for the Handi-Craft company for concerned parents, which was also included in the caption for the Instagram post. So it definitely seems like Dr. Brown's is committed to remedying the problem as soon as possible.

Comments on the Instagram post regarding the recall from parents were mostly either shocked replies or words of gratitude to the company for alerting parents to the issue. They included replies like, "Thank so much I’m a dr.brown product loyal customer," and "Not my boys turtles! They love their Dr. Brown's turtle pacifier."

Recalls can definitely be a little bit scary, especially when it comes to products that very small children use. But Dr. Brown's seems to be working very hard to make parents aware of the problem, with help from the U.S. Consumer Product Safety Commission and lots of concerned parenting websites. The more parents are aware, the less chance there is that anyone will need to worry about their child's beloved lovey being at all dangerous to use.