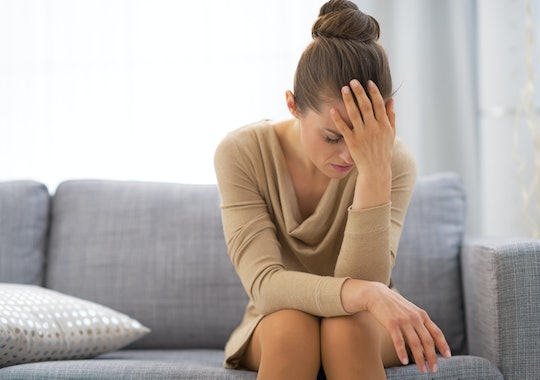 Maternal mental health issues have only recently become a publicly-discussed topic thanks to awareness campaigns and moms' personal stories. One of the most important outcomes of moms publicly discussing their mental health struggles is that it shows others that they aren't alone, and that they aren't an anomaly or a terrible mother for feeling the way they do. In fact, more than one-third of mothers have experienced mental health issues related to parenthood, according to a new online survey by the BBC. These issues can include conditions like acute stress, severe anxiety, and postpartum depression. The survey involved 1,800 British parents, but mental health issues related to parenthood are a concern the world over.

By comparison, 17 percent of fathers in the same survey had experienced similar issues, according to the BBC. So parental mental health can impact both moms and dads, and it's something we should all be concerned with.

When it comes to getting support in dealing with these issues, 60 percent of women in the survey said they had received emotional support from their friends, and 56 percent from their partner. I'm not sure why they're not getting more support from their partners, and would personally be interested in a follow-up exploring that, because that figure seems too low to me. Interestingly enough, 18 percent of women went online for support instead. Hooray for mom blogs and forums, right? Thankfully, more than two-thirds of the survey's affected mothers sought professional help for the conditions they reported.

The numbers in this recent survey are a little higher than those previously reported. Worldwide, about 10 percent of pregnant women and 13 percent of women who've just given birth experience a mental disorder, depression being a primary issue, the World Health Organization reported. But those numbers might not include all of the maternal mental health issues that the survey out of Britain did.

And in developing countries, the numbers are worse: 15.6 percent of women experience a mental disorder during pregnancy, and 19.8 percent do after childbirth, according to WHO. The organization noted that in severe cases, a mothers’ suffering can be so severe that they may even commit suicide.

Knowing that, it's really scary to read that in this survey, 15 percent of moms asked said they didn't receive any emotional support while parenting. And not surprisingly, parents who don't receive any — or limited — support after they have a baby often have trouble coping with the stress of parenthood. And sometimes that manifests in really serious conditions like postpartum depression.

Mom Lauren Doyle told the BBC she experienced post-traumatic stress disorder after giving birth to her first daughter because it was physically traumatic. But initially, she thought what she was feeling was normal. Doyle told the BBC:

I didn't think I was unwell. I thought, 'All mums feel like that, this is just mum mode, I'm a mum now.'

She also said she couldn't breastfeed, and felt really judged by other people for her parenting. In fact, many of the parents surveyed said they felt criticized by a lot of other people, according to the BBC.

I think the moral of the story here is that countries and communities need to be more supportive of mothers and parents in general. Some of the respondents may have experienced mental health issues regardless of support, and maternal and parental health issues should be better studied regardless. But it probably doesn't help to have everyone from family members to random strangers criticizing parents' choices, and we could all work on being more supportive and kinder to new parents, who have a lot on their plates without also dealing with unnecessary judgment from others.