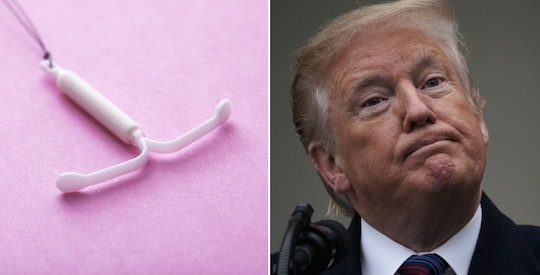 The Research Is In: More Women Got IUDs Soon After Trump's Election

The past few years have revealed how difficult it can be for people to reliably and safely access birth control. Reproductive rights continues to be a hot topic in the political realm and, after the 2016 presidential election, many people cited concerns over whether they'd have access to birth control after Donald Trump took office. Recently, a new study confirmed more women are using IUDs and the demand jumped after Trump's election. It's a fascinating study that shows just how much people's health care decisions are impacted by politics.

"You have 70 days," was the message passed across social media immediately after Trump's election. The Affordable Care Act, also known as Obamacare, gave people access to 18 FDA-approved types of birth control at no out-of-pocket cost, according to USA Today, and after Trump was elected, it was unclear how things would change.

Women's fears weren't unfounded. Plans to repeal the Affordable Care Act were among of Trump's initial platform. And, in 2017, the Trump administration worked to give employers more leeway in refusing to cover birth control.

Now, a few years have passed, and researchers wanted to know if people did indeed turn to long-term contraceptives like IUDs in response to Trump's election. A new study published in JAMA Internal Medicine backed up with some professionals and everyday people had already noticed: Trump's election led to an increase of women seeking long-acting and long-term birth control.

Researchers at Brigham and Women's Hospital looked at information from more than 3 million women between the ages of 18 to 45 with commercial insurance, according to Medical Xpress, which noted that researchers found rates did increase by 21.6 percent in the 30 days after the election compared to rates at the same time of the year in 2015.

"The ACA’s contraceptive coverage mandate is an important strategy to reduce unintended pregnancies. The Trump Administration has weakened this mandate," the researchers wrote in the study's abstract. "Our findings could reflect a response to fears of losing contraceptive coverage because of President Trump's opposition to the ACA or an association of the 2016 election with reproductive intentions or LARC awareness."

LARC stands for long-acting reversible contraceptive and it's the reason why so many women have opted for IUDs.

An intrauterine device (IUD) is tiny and goes inside of your uterus to prevent pregnancy. According to Planned Parenthood, there are five different brands of IUDs approved for use in the United States. They're all long-lasting forms of birth control, with protection that ranges between three to 12 years.

IUDs are one of the most effective birth control methods out there. If it's used correctly, WebMD notes that your chance of getting pregnant is less than 1 percent. The best part is there's no daily or weekly hassle with IUDs. You get it implanted and you don't have to deal with it for at least three years.

Of course, if you're worried about losing access to birth control due to cost, you are going to opt for a long-lasting method. That explains why so many women flocked to IUDs in the first 30 days after Trump's election.

One of the study's authors, Lydia E. W. Pace, said, according to MedicalXpress, "Women responded to this political event by seeking out this method of contraception, perhaps because the threat of losing access expedited a decision or encouraged them to seek out a method they hadn't previously considered."

Although it's great to know that some people were able to receive the birth control they needed, the Trump administration continues to pose a threat to reproductive rights. There are many people who continue to struggle to gain access to birth control methods like IUDs. Hopefully, these types of concerns won't be relevant in the future. But, for now, they are still ongoing.

More Like This
Elmo Talks About Getting His Covid Vaccine In A Cute New Video
Here’s How To Fight For Abortion Rights
This Map Illustrates Just How Many States Would Ban Abortion If Roe V. Wade Is Overturned
You Can Schedule Your Kid’s Covid Vaccine Appointment At Walmart