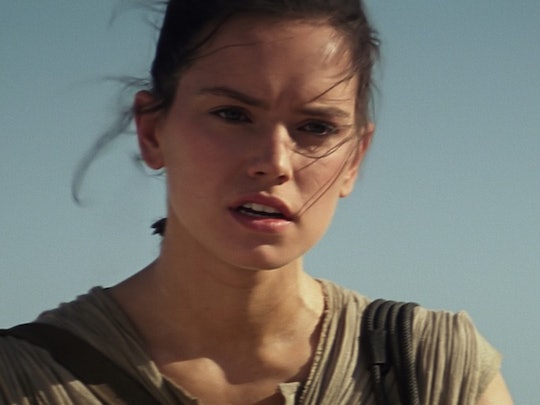 More Women Were Featured In Films In 2015, But There's Still A Long Way To Go

A new study has found that 2015 was a slightly less abysmal year for women in film, according to Entertainment Weekly. The study, conducted annually by the Center for the Study of Women in Television and Film at San Diego State University, found that among the top 100 domestic films of 2015, 22 percent of the protagonists were women, and 34 percent of "major characters" (defined as characters who appear in more than one scene and are "instrumental to the action of the story") were women. Yes, that number is low, but there were more women in film in 2015 than in previous years. Compare it to 2014, when just 5 percent of major characters were women. This is actually progress. Well, I hope it's progress.

Dr. Martha Lauzen, who conducted the study, said "We will need to see a couple more years of data before we’ll know whether this is the beginning of an upward trend or if 2015 was an unusually good but aberrant year for female characters," according to EW.

But just because these women were major characters doesn't mean that they were treated the same as their male counterparts. The study also found that the female actors skewed younger than the male actors; the majority were in their 20s or 30s (24 and 28 percent, respectively), while the men were mostly in their 30s or 40s (27 percent and 30 percent). There were almost twice as many male actors in their 50s as female actors. And disturbingly, female characters were more likely to have a known marital status but an unknown occupation than male characters, because that's what defines a woman, apparently.

Of course, this is far from just a "Hollywood problem." Women are underrepresented in so many other fields, such as STEM, media, leadership roles, and so many more. Heck, just look at the presidential race; only two women are running. That's just 18 percent of the candidates (and if you factor in all the men who were running, but dropped out, women originally made up just under 9 percent of the candidates). This, obviously, is a problem.

So how do we solve the issue? It's a bit of a paradox. According to Forbes, companies need to hire more women, so that they'll hire more women. Confused? The argument is that hiring more women (in their example, in tech) will lead to less discrimination and harassment, as well as more girls getting interested in tech in the future. The tricky part is finding that first wave of women, who will basically have to agree to be discriminated against and harassed in order to blaze a trail for the next crop.

In Norway, they've taken a legal approach to gender diversity: there's actually a strict quota that at least 40 percent of all board seats be occupied by women. According to Think Progress, it's working out pretty well for them. While some feared that it might stigmatized the women whose positions were won only to fill a quota, the women interviewed by professor and author Aaron Dhir found that the quota "democratized access to a space that had just been unavailable to them," and he believes that "[b]ecause the quota mandates a gender balance, it makes marginalization and stigmatization pretty difficult."

Whether by law, by corporate policy, or just by action, the solution to gender diversity problems seems to be pretty clear: just hire the damn women, already. The question is, when will people actually start doing it?