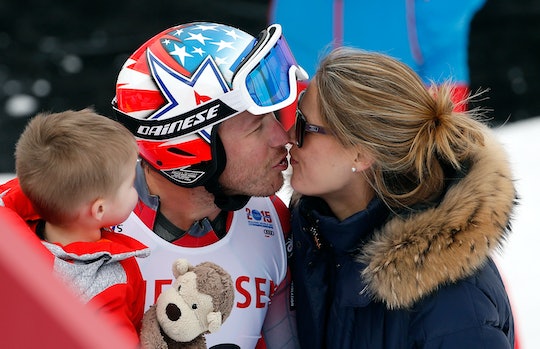 It looks like congratulations are in order for Olympic swimmer Bode Miller and professional beach volleyball player Morgan Beck. A little more than one year after they lost their 19-month-old daughter, Emmeline, in a tragic drowning accident, they are adding to their family once again. On Monday, Morgan and Bode Miller announced they're expecting identical twin boys with the most beautiful and touching photos shared on Instagram.

Both Bode and Morgan took to Instagram on Monday to share the news, according to People. Alongside a series of photos of their children beneath giant balloons that spelled "twins," Morgan reflected on her previous pregnancy with their now 10-month-old son Easton, as well as how their family has coped with Emmy's death over the past year. "Losing a child while pregnant was the most confusing experience of my life. The conflict of emotions from what was pure joy turned to guilt and terror overnight," she wrote. "How could I love this baby the way I loved Emmy? Was it okay to love this baby the way I loved Emmy? It felt like by loving my son, I was trying to replace her."

Morgan went on to explain that welcoming her son signified a "monumental step forward" and "proof that time continued" without her daughter — even though all she wanted was for to stop.

"But let me say this....I couldn’t have been more wrong. Easton provided us an even closer bond to his sister. The moment I heard his cry, something sparked back alive in my soul. Hope. Love. I’m not sure. But in that moment, I knew I was Mom and my kids deserved the world from me," she continued. "Everything was going to be okay. My joy and grief could coexist. Now, I can actually say with joy and excitement that we are expecting identical twin boys."

Interestingly, it seems that Bode has wanted identical twin boys born on his birthday for quite some time. (Which is quite specific, yes. But so cool!) And it looks like there's actually a chance that could happen. That's because the twins are due on Nov. 11, and Bode's birthday is Oct. 12, as the expectant mama shared on Instagram. "From the beginning of this pregnancy, we knew Emmy had her hands in this miracle somehow," Morgan ended her touching Instagram post.

Bode also shared a photo of his four children via Instagram writing, "Twins! Identical twins! Couldn’t be more excited to grow this beautiful family my wife and I have created. Dream come true."

The Millers welcomed Easton in October 2018, according to TODAY — just months after Emmy died in a tragic drowning accident in the backyard pool at a neighbor's home in June. Morgan told E! News that Easton reminds her "so much of Emmy" and that he is "such a perfect addition" to their family. "It's like he was waiting for us to bring him into this world," she told the news outlet. Morgan and Bode also share a 4-year-old son, Nash, and Bode has a 6-year-old son Samual and an 11-year-old daughter Neesyn from previous relationships.

Although nothing will ever be able to fill the hole left by Emmy in the hearts of Morgan and Bode Miller, I'm so happy they've been able to feel happiness and excitement in their lives since her tragic passing. The idea that intense grief and joy can co-exist is something that isn't often addressed. And I'm positive their identical twin boys will bring double the joy to their family this fall!