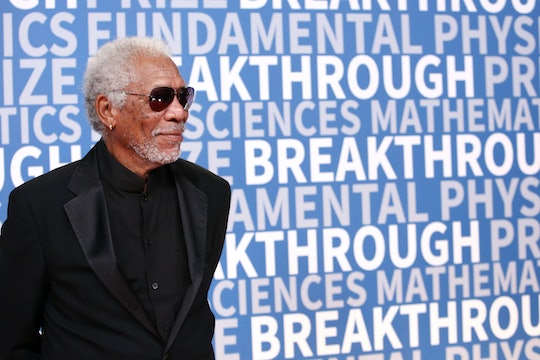 Morgan Freeman was the recipient of a special honor at the Screen Actor's Guild Awards, accepting an award that has been handed out every year to one specific performer for decades of exceptional work. The Life Achievement Award isn't tied to a specific role or project, instead paying homage to everything an actor has accomplished over the course of their career. And Morgan Freeman's SAG Life Achievement Award speech is one to remember.

The SAG website praised Freeman's critical and commercial successes, calling him "one of the most recognizable figures in American cinema." It's definitely true: Freeman has played many memorable roles, and he doesn't even need to appear onscreen to make an impact. His voice alone has earned him accolades. He won an Oscar for Best Supporting Actor in 2005 for Million Dollar Baby, but had already been nominated twice before. His first nod came in 1987 for a supporting role in Street Smart, and a Best Actor nomination followed in 1994 for The Shawshank Redemption. He received another Best Actor nomination in 2010 for Invictus.

Freeman's many impressive performances made him a perfect choice to receive the SAG Life Achievement Award, and his speech only helped to confirm how much he deserved this honor.

Rita Moreno was the one to present Freeman with the award, returning the favor from several years previously when he was the one to present it to her. She gave the audience a recap of their many years as friends and co-workers, highlighting her favorite performances and moments acting alongside him. She praised his philanthropic work as well, saying that he was so much more than an actor, narrator, producer, and humanitarian. He was a national treasure. She introduced a video montage of Freeman's many roles, after which he received a standing ovation. Then he took to the stage to speak.

Before he could get more than a few words out, however, Moreno gave him a helpful tip — she instructed him to lift up his hat so that everyone could see his face. First he joked, "You have no idea how long I’ve had to put with that." Then he proceeded to say that he knew he should give a list of thank you's, but he didn't know the names of everyone in the audience. He did shout out SAG-AFTRA, his family, and his business partners. "This is beyond honor, this is a place in history," he said. It was a quick speech, but a humorous one that came from the heart.

Freeman didn't stay in front of the microphone for very long, but he paid homage to all of his colleagues there watching (as well as his friend Rita with the mid-speech advice), which was perfectly on theme for the night. The SAG Awards are all about actors honoring each other for the work they have done and the iconic performances they've committed to film that have inspired so many. Freeman kept it light but it was clear he appreciated the award and all of the people in the room with him.

He also took a moment to critique the design of his award. Before exiting, Freeman said, "I'm going to tell you what's wrong with this statue. It works from the back. From the front, it's gender specific. Maybe I started something." With those final words, he departed with his (apparently very heavy) award. Twitter was clearly appreciative of Freeman's words, and the fact that he called out the fact that the little statuette was not gender neutral.

Freeman's short but sweet speech definitely reminded fans why they appreciated him so much in the first place.