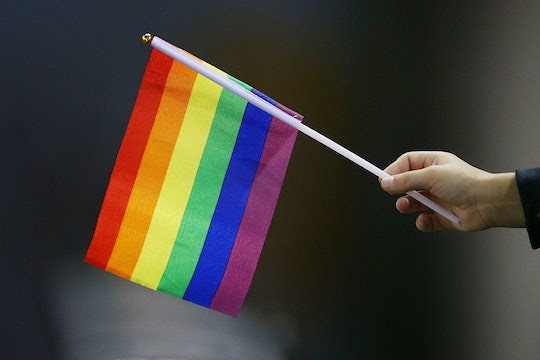 Major change is coming to the Church of Jesus Christ of Latter-day Saints, and some say it's long overdue. The Mormon church will allow baptisms for children of LGBTQ parents, marking a reversal on a longstanding divisive policies amid a push from the faith to be more compassionate about LGBTQ issues, as TIME reported. This is a major step for the church, which previously prohibited baptisms of children with gay parents until they turned 18 and disavowed same-sex relationships.

More Like This
The Obamas’ New Family Rule? Get Vaccinated If You Want To Hang Out With Us
Biden Proposes Plan To Give Every Child Free “High-Quality” Preschool
A Private School In Miami Says It Won't Employ Vaccinated Teachers
6 Books To Read If You're Thinking About Adopting

Under the new rules, children of gay parents can be baptized with approval from their parents, according to TIME. Parents must acknowledge that their children will be taught church doctrine, the church announced in a statement. The Mormon church also said, however, that it hasn't changed its stance on gay marriage or same-sex relationships, which it still considers a "serious transgression."

The statement, published on Mormon Newsroom, added that people in such relationships will no longer be considered "apostates," meaning they won't be kicked out of the religion. That label, given to LGBTQ couples under a 2015 Mormon church policy, was contested by members of the disenfranchised group, as well as allies, according to CNN. It was condemned as damaging to people already struggling to find their place in the religion.

"The very positive policies announced this morning should help affected families," church leaders said in the statement. "In addition, our members' efforts to show more understanding, compassion and love should increase respect and understanding among all people of goodwill. We want to reduce the hate and contention so common today."

As for where the policy came from, Dallin H. Oaks, first counselor in the First Presidency, said the church reached the new policy after "an extended period of counseling with our brethren," according to New York Magazine.

The church's statement went on to say, "These new policies are being sent to priesthood leaders worldwide and will be included in online updates to our Church handbook for leaders. These changes do not represent a shift in Church doctrine related to marriage or the commandments of God in regard to chastity and morality. The doctrine of the plan of salvation and the importance of chastity will not change."

Thus far, the change has been lauded by prominent gay Mormons and LGBT groups. Some, however, feel it's not enough. According to BuzzFeed News, executive director for Equality Utah, Troy Williams, told the outlet he was surprised by the announcement from the Mormon church, but said it was LGBT members and families who shared their experiences with the church who deserved the credit. Williams' organization told BuzzFeed News in a statement the gay Mormon community was "heard."

"Today marks a positive step in teaching our young people we all have value — regardless of our sexual orientation or that of our family members," Equality Utah told BuzzFeed News. "We have work yet to do in order to ensure young LGBTQ people and the children of LGBTQ people understand their tremendous value, and this is an important part of that journey. We look forward to continuing the dialogue. Onward."

The Human Rights Campaign expressed similar sentiments in a statement. The group called the reversal a "welcome change that moves the church closer to a day where LGBTQ Mormons can see themselves affirmed and included in their faith and community."

Some, however, remain critical of the Mormon church's old policies, and say the reversal is too little too late. Emily Coleman, a writer, recalled on Twitter not being "invited to weddings" because of the 2015 anti-LGBTQ policies from the Mormon church. Coleman added in her tweet that the policy was "devastating."

"It's hard to overstate how devastating this was for me personally. I had family members who refused to speak to me for over a year over this," Coleman tweeted. "I wasn't invited to weddings. This is not just an oops."

The Mormon church hasn't apologized for its original policy. While the new policy can't undo damage done to its LGBTQ parishioners under the old policy, the new, more accepting, stance is a welcome change. And hopefully, it brings healing to families divided by the 2015 policy.