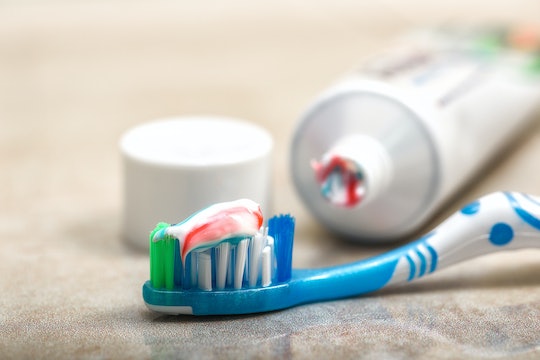 If Your Morning Sickness Is Trigged By Brushing Your Teeth, Here's What You Can Try

When I was pregnant, I developed a severe form of morning sickness known as hyperemesis gravidarum. There were few things I could eat and drink, and my gag reflex seemed to have a hair-trigger. Just rinsing out my mouth could throw me into a violent episode of vomiting and nausea. It was an absolute misery. Every day, it was a challenge just to finish getting ready, and brushing my teeth? A nightmare. However, eventually, I did figure out how to deal with morning sickness while brushing my teeth — I had enough problems on my plate without adding cavities to the list.

It turns out, I'm far from alone in this. During the course of my research for this article, I found message board after message board filled with women experiencing the very same aversion to brushing their teeth due to their morning sickness and the gagging it brings about. Fortunately, there are some ways of easing the choking nausea that tooth brushing can bring. Solutions include everything from skipping the toothpaste to switching from an electric or battery-operated toothbrush to a smaller, manual version that you have total control over.

Personally, I had to change my entire routine just to feel OK.

To add insult to injury, oral health is more important during pregnancy than ever before in your life. The Iran Journal of Reproductive Medicine's study "showed that mothers with periodontal disease relatively gave birth to low-weight babies." Researchers went on to note that "pre-term delivery and low birth weight may lead to infant mortality, high treatment expenses... It is suggested that periodontal assessment before pregnancy and during this period must be considered as a part of health care protocols for future mothers." As per the American Dental Association, the best way to prevent periodontal (gum) disease is by brushing and flossing twice daily.

How do you do that if you gag every time? Dentist Dr. Nabeel Rahman wrote on his blog that "many pregnant women have problems brushing their teeth because it triggers their gag reflex, and they feel as though they might vomit." He suggested a novel approach that I'd never tried — switching to a toddler toothbrush. Its smaller head and softer bristles might diminish the horrific retching brought about by your adult tooth brush.

He also suggested changing the way you brush. Long, slow strokes instead of the fast, sweeping motions common to adults. I know that when I'm not pregnant, I tend to be a bit aggressive with my brushing. I'm also lightning fast. Rahman noted that slowing down may ease the symptoms.

How to brush your teeth if you have severe morning sickness is pretty individual. However, The March of Dimes noted that if you keep throwing up as you brush, you might need to switch to frequent rinsing of your mouth with water, because at least if you do that, you're diminishing the acids produced by vomiting.

I found that toothpastes with either little to no smell, like Biotene, worked best when it was smell that was bothering me the most. Dr. Mark Burhenne of Ask The Dentist agreed. He cautioned for moms to switch to a bland-flavored toothpaste. He also wrote, "Go with an all-natural toothpaste that doesn’t contain harmful chemicals."

When it was the gagging that was grinding me down, I switched to an admittedly gross-sounding and quite pricey ginger toothpaste that I swear worked wonders. Just make sure to buy the ginger toothpaste with the genuine ginger oil in it which has been shown to possibly reduce the symptoms of morning sickness, according to the American Pregnancy Association. Also, for some reason, mint just really did me over during pregnancy.

You can try to take deep, soothing breaths while you brush, too and focus your vision on one point in the room to anchor yourself. If necessary, have a seat on the edge of the tub or floor to further ground yourself. If you're still having problems after all this, talk to your OB-GYN and dentist. Perhaps you can work together to come up with a solution to this thankfully temporary problem.