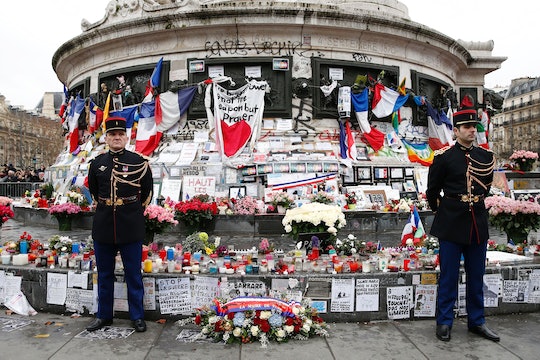 Morocco Arrests Belgian National Tied To Paris Attacks, But Is It Salah Abdeslam?

Morocco's Interior Ministry announced Monday that Moroccan police arrested a Belgian national with Moroccan descent who had a "direct relationship" to the Paris attacks, which left 130 people dead, according to the Associated Press. The ministry didn't release the man's identity with the announcement, so it's still unclear who he is. But could it be Salah Abdeslam, the man who allegedly helped plan and orchestrate the attacks that took place at six different locations across Paris? Early reports said it probably isn't him.

Sky News reported that authorities released the initials of the man they arrested as G.A., or, according to the Associated Press, J.A., depending on the translation from Arabic to English. The statement also said the man had had direct contact with one of the Paris attackers, according to Express news:

He went to Syria with one of the suicide bombers of Saint Denis.

If the initials the ministry released were those of the man they captured, then it would mean he's probably not Abdeslam. Separately, Abdeslam reportedly had never gone to Syria to fight or train with ISIS, and the Moroccan ministry said the detainee had received military training from ISIS leaders in Syria, including the mastermind" of the Paris attacks, according to the AP. But "the mastermind" is a reference to Abdelhamid Abaaoud, the Belgian militant who was killed in a police raid on a Saint Denis house days after the attacks, according to Express news.

Moroccan investigators said the man they arrested had build ties with Abaaoud while he was in training in Syria. It's unclear how many people directly connected to the Paris attacks didn't die in the attacks or didn't help with actually carrying them out. The man that the Moroccan government arrested may have helped orchestrate the attacks from somewhere outside of Paris.

Abdeslam, who was one of three brothers who helped carry out the attacks, was stopped and then released by guards at the French border the night after the attacks. On Thursday, Politico reported that he contacted a renowned Belgian lawyer named Sven Mary. Mary declined to comment about the contact, but Politico reported that, if true, it could indicate that Abdeslam was about to turn himself in to Belgian police.

Though this suspect may not be Abdeslam, his capture could help reveal more details about the planning that went into the tragic attacks on the French capital in November.