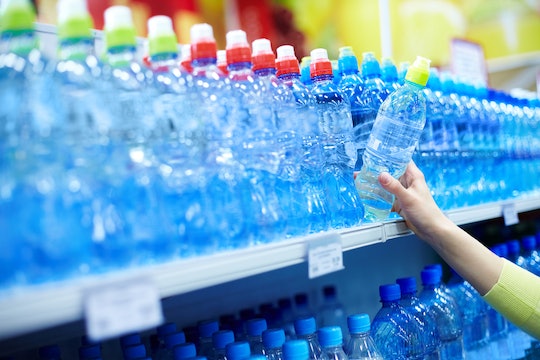 In addition to the financial and environmental benefits, it turns out there is another reason to opt for a reusable water bottle instead of buying plastic disposable ones every time you get thirsty. According to new research, most bottled water contains microplastics, which are often-microscopic particles of plastic. The study analyzed several major American bottled water brands as well as a few international brands, and the results are pretty staggering. Here's everything you need to know about microplastics, and how these new findings about bottled water may affect you and your family.

A study conducted by SUNY Fredonia and published by Orb Media tested water from 259 disposable water bottles. The bottles came from 27 lots and 11 brands (including Aquafina, Dasani, Evian, Nestle Pure Life, and San Pellegrino). The bottles were purchased from 19 locations across nine countries, which, the researchers explained, was to make the sample pool more diverse, because most bottled water is nothing more than municipal tap water that's been filtered. Among the water analyzed, researchers found that 93 percent showed signs of microplastics. In comparison to a study the group previously conducted on microplastics in tap water, the bottled water studied had double the amount of plastic contamination as the tap water that was studied.

Sherri Mason, a professor of chemistry at SUNY Fredonia, is one of the researchers who conducted the study. She told BBC News in an interview:

We found [plastic] in bottle after bottle and brand after brand... It's not about pointing fingers at particular brands; it's really showing that this is everywhere, that plastic has become such a pervasive material in our society, and it’s pervading water — all of these products that we consume at a very basic level.

What exactly are microplastics? Microplastics are tiny pieces of plastic, ranging from microscopic in size to about 5 millimeters (about the size of a sesame seed), as per the National Ocean Service, and they come from a variety of plastic sources. For one, when plastic items break down, they do not biodegrade, but instead keep breaking down into microplastics. They can also come from clothing made of synthetic fibers, such as polyester, according to a study published by the National Center for Biotechnology Information.

Additionally, as the national Ocean Service notes, microplastics can come from hygiene products (like toothpaste and face wash) that have microbeads. Microbeads are often too small to get filtered out, so they end up in the ocean and other natural bodies of water, as do other microplastics, thanks to trash that floats from streets into storm drains and then into oceans. Fish and other creatures unknowingly consume microplastics. Then, as Orb Media notes, humans eat the fish, further increasing our own microplastic intake.

So just how harmful is consuming microplastics? “There is some evidence that microplastics can cause harm [to organisms],” Richard Thompson, professor of marine biology at Plymouth University, told The Independent in 2016. "If we carry on with business as usual ... then we are going to reach those thresholds." Basically, more research still needs to be done regarding the specific effects of microplastic contamination on human life — but if humans continue to increase their plastic consumption, therefore allowing even more plastic to disrupt oceans, the problem could get worse. And it's already pretty bad — a 2015 study published on Scientific Reports found that approximately 28 percent of the world's fish contain plastic.

All that being said, if you're a diehard bottled water drinker, there isn't too much to worry about. As Mason told BBC News, "It's not catastrophic, the numbers that we're seeing, but it is concerning." However, it couldn't hurt to opt for a reusable water bottle and filtered tap water instead — in fact, it could help a lot.