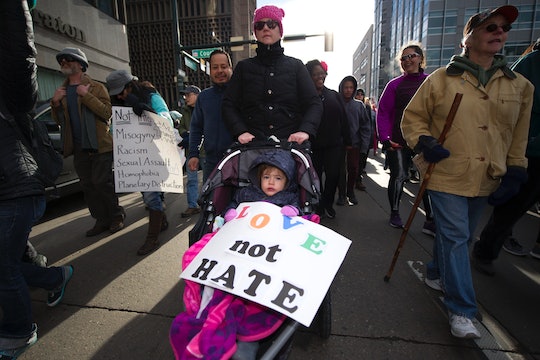 On Saturday, January 21, just 24 hours following President Trump's official inauguration to the presidency, thousands and thousands of activists took the streets of Washington, Portland, New York, San Diego, and other cities all over the country to lead marches in protest of his election, his hateful rhetoric, and his treatment of immigrants, women, and those in marginalized communities. Though the day brought endless messages of hope, passion, inspiration, and conviction in the fight for the rights of those who feel ignored and at-risk in a Trump White House, the most empowering signs from little feminists marching all over the country helped highlight not only what's at stake in the next four years, but also how bright (and powerful) the future is going to be.

The election of Trump to the presidency and the White House has been a road marked by sheer terror, ambivalence, hatred, and racist, sexist, xenophobic language. Though he vows to be a president for "all Americans" and to "return the power to the people," Trump's behaviors and policy promises have thousands downright terrified when thinking ahead to what the next four years might look like. But it's images of children standing in solidarity with total strangers that capture the essence, the spirit, and the importance of what the marches truly mean.

Pointed Messages For Our President

Images of children standing up for rights and issues they probably don't even fully understand yet is a lasting, beautiful, wholly patriotic testament to the idea behind democracy. Hundreds of years ago, when America was an idea spearheaded by the experiment known as "democracy," a group of affluent white men made a promise to treat all men as equals. Though we've evolved from that original belief in wonderful ways, these children embody the purpose of that dream — and what's more, they're holding our most recently elected officials accountable for that.

Yes, Trump's election may have unearthed the ugly underbelly of America that most of naively thought we'd moved beyond, but these kids are the hope, spirit, and truth. If we can make them proud, if we can ensure that we are successful so that their futures are brighter, safer, more unifying, more purposeful, more inclusive, more equal, then we'll have succeeded, no matter who sits inside the Oval Office.