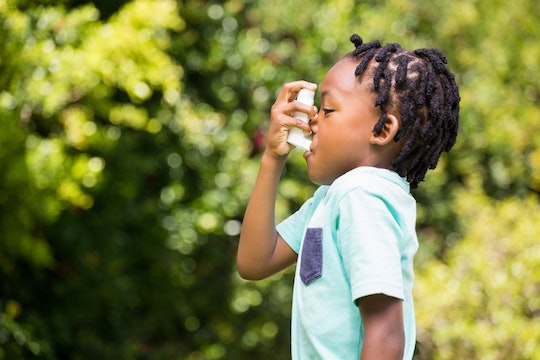 Asthma is one of the most common conditions in children, and those that have it know the feeling of an oncoming attack all to well. It starts with a tingle in the chest, followed by a tightness that can only be relieved by medication. While there is no cure for asthma, it can be controlled through the use of an inhaler, but only if it's used as directed. Most kids with asthma aren't using their inhalers correctly and parents need to step up their game.

A recent study published in the Journal of Allergy and Clinical Immunology suggests that children, as well as adults, are not using their inhalers properly and therefore not receiving adequate medication to suppress asthma symptoms.

Asthma is a lung condition that makes it harder for a person to get air in and out of the body, due to constricted and irritated airways, according to The American Lung Association. Triggers such as weather, pollen, pollution, exertion, or even the common cold can cause an asthma flare-up or attack.

The study concluded that 84 percent of participants waited just 30 seconds and 50 percent waited 15, which means that the recommended dosage for effectiveness was not being consumed, the study concluded, as per The New York Times.

Researchers placed electronic medication monitors on the inhalers of 7,558 patients to measure the time between the first and second puff, according to The New York Times.

"If a kid’s asthma is not well controlled, I would want to be sure if I’m the doctor I’m addressing technique first and foremost before escalating the medications," Dr. William C. Anderson III, co-author of the study and the co-director of the multidisciplinary asthma clinic at the Children’s Hospital Colorado told The New York Times. "If you notice things are not well controlled with your child’s asthma, the first thing to check is whether the child is taking it appropriately at the correct times."

Children and adults are encouraged to use a spacer, a tube that creates a space between the mouth and the inhaler making it easier to breathe in the medicine, according to HealthDay.

There are ten steps to using an inhaler with a spacer correctly, according to experts at Children's Hospital Colorado.

Asthma is more prevalent than most people think, making the results of the study a cause for greater concern. Asthma is the leading chronic disease in kids and 1 in 12 kids in the United States have it, according to the Asthma and Allergy Foundation of America. It's more common in kids than adults, and more common in boys than girls. It's also the number one reason for missing school days.

Having asthma can be controlled with the right medication that's administered correctly. For many kids, a refresher in technique and little extra parental supervision may make all the difference.