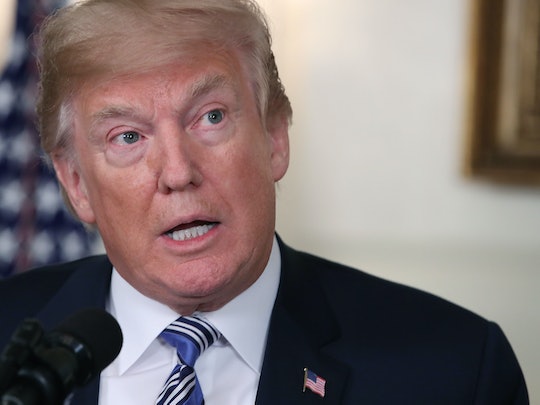 Most Of The US Agrees Trump Is A Bad Role Model For Kids, But Religious Voters Still Support Him

It's no secret that quite a lot of people aren't fans of the Trump administration, though he still has some supporters. President Donald Trump's approval rating is still very low, and poll after poll backs that up. But you may be surprised to hear that, while most of the country agrees Trump is a terrible role model, particularly for kids, some religious voters are still supporting him, according to a new survey. That might seem shocking when it comes to the "family values" crowd, but politics are pretty unbelievable in the United States these days, and this is really not the weirdest or most shocking news I've heard regarding anything involving the Trump administration this week.

Almost 78 percent of white, evangelical Protestants approve of Trump's job performance, according to The Washington Post. But they're the only group surveyed by the Pew Research Center that still "overwhelmingly" feel that way. White survey respondents in general are completely divided — apparently, 50 percent approve of the job Trump is doing as president, but 45 percent disapprove, the Pew Research Center reported. By comparison, Black respondents and Hispanics strongly disapprove of Trump’s job performance, at 85 percent and 74 percent respectively.

Things get especially interesting when you look at the other religious groups surveyed. White, mainline Protestants, rather than evangelical ones, are pretty evenly divided in their views on Trump, but black Protestants overwhelmingly disapprove of the way Trump is handling his job, at 84 percent. Interestingly, most Catholics disapprove of Trump’s job as president as well, at 57 percent.

It certainly seems hypocritical that a group of voters so closely aligned with conservative, "values" voting would still approve of a president so entrenched in personal and political scandal. There's an entire summit for "values voters" that promotes "traditional marriage, religious liberty, sanctity of life, and limited government," but it celebrates Trump in spite of the rumors of alleged adultery in his marriage, just for starters. (Trump has denied the allegations.) I guess I'm not totally shocked by the Pew poll's findings, given the support Trump still has with many more conservative organizations, but it's still surprising since things like adultery are usually a big deal to super-religious Christians.

And I would think that voters who support traditional marriage and family "values" would also be concerned with how their children view the president, but if you look at other recent polls, they don't all seem to be. A recent Quinnipiac University Poll found that 67 percent — around two-thirds — of voters say Trump isn't a good role model for children. The numbers don't add up.

When it comes to Trump's image both on the global scale, and on a much smaller level with American kids, Tim Malloy, the assistant director of the Quinnipiac University Poll, said on the Quinnipiac poll website:

Americans say President Trump is damaging the country's image globally; flunking the decency test and setting a bad example for kids. There's no way to spin or sugarcoat it. The optics are ugly.

And the question of whether Trump sets a good example for kids isn't a new one. A Washington Post-ABC News poll in the summer of 2017 asked, "Do you think the following statement applies to Trump, or not? He's a positive role model for young people." Sixty-eight percent of adults who responded said no — nearly 7 in 10 respondents.

Since then, there's been plenty of news about Trump and his administration that have made other religious individuals question his actions. After Trump decided to discontinue DACA protections for "Dreamers," Pope Francis himself reportedly said, "I have heard it said that the president of the United States presents himself as a man who is pro-life, and if he is a good pro-life [man], then he will understand that the family is the cradle of life, and that it must be defended as a unit," according to The Pittsburgh Post-Gazette.

I was very frustrated. I didn’t have a good option. I didn’t have that person who I would say is a great role model for my daughters and for my family.

But Lankford did back Trump come election time.

I'm not entirely certain why evangelical voters are still supporting Trump so strongly. If most people believe that he's not a great role model for children, it doesn't make much sense to me that voters who focus so strongly on the traditional family unit don't just merely support him, but are still overwhelmingly in his corner.

At best, these voters aren't aware of Trump's views and will support any Republican president, and, at worst, they are openly supportive of Trump's views on immigration, terrorism, and the Take A Knee movement, for example, which are entirely fueled by racism. Many of those who refuse to waver in their support of Trump are white voters, and Trump was overwhelmingly elected by white voters, so race — both his race and his views on other races — is a huge factor. So much for practicing what you preach.