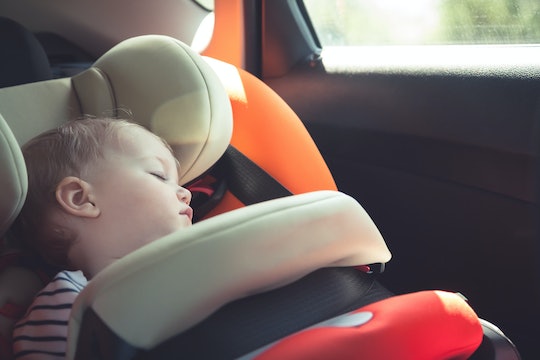 If You Don't Think You Could Leave Your Child In A Hot Car, You're Wrong

Each year, dozens of children lose their lives after being accidentally forgotten in the back seats of hot cars. It's a preventable tragedy that is absolutely gut-wrenching to even think about, and yet, the news stories and campaigns reminding parents to check their backseats don't exactly seem to be making much of a difference. So what's going wrong? A recent survey by advocacy group Kars 4 Kids found that most parents think hot car deaths could never happen to them, and that only an irresponsible or neglectful parent would ever forget that they have a child in the backseat. The problem, though, is that research has shown that's not even sort of accurate. In fact, the truth is that anyone is capable of making the deadly error, simply because of the way our brains work.

In a survey of 2,500 parents across the United States, Kars 4 Kids found that only 16 percent of parents actually believed they were capable of forgetting their child in a hot car — and that the overwhelming majority believed that those who did were "unfit to be parents," who deserved to be punished with a jail sentence. But most hot car deaths that occur each year are accidental, and can be caused by something as simple as a change in a parent's daily routine.

As easy as it may be to make a snap judgment about hot car deaths, experts say it's crucial that parents and caregivers understand that they are all absolutely capable of accidentally forgetting their child in the car on a hot day — even if they are responsible, loving, conscientious parents. And that's because the elements of our brain that allow us to forget are ones we actually have little direct control over.

In June 2017, University of South Florida psychology professor Dr. David Diamond told NBC News that that "several competing factors in the brain" that control subconscious action and conscious awareness are behind the seemingly-inconceivable errors that cause parents to forget their children in hot cars. When we drive a familiar route, for example, our brains often go on "autopilot" without us even realizing it. But if your routine changes that day — say, if you are supposed to remember to drop your child at daycare, when that's not something you do regularly — and you also happen to be a tired parent who might also be running late and your child also happens to be fast asleep, and silent, in the back seat? Well, you could easily drive to work and leave your car without even realizing your child is still there.

What's more? In a separate article Diamond penned for The Conversation in 2016, he explained that, because of these brain processes, most of the parents who have left their kids in hot cars not only simply forgot — they actually thought they had taken their children to daycare, and that there was no possible way they could have even been in the car to begin with. Diamond wrote:

A universal observation I have made is that each parent’s brain appears to have created the false memory that he or she had brought the child to daycare. This scientific anomaly explains why these parents went about their routine activities, which even included telling others that they needed to leave work on time to retrieve their child from daycare. Having this 'false memory' caused them to be oblivious to the fact that their child had remained in the car all day.

In other words, leaving your child in a hot car is rarely about neglect, and much more about a series of seemingly benign factors that, together, can lead to one major mental error. And those errors are occuring with devastating regularity: this year alone, according to NoHeatStroke.org, 29 hot car deaths have occurred in 2018, meaning that we're already on pace to surpass 2010's record-high (by this time that year, there had been 27).

The good news, at least? Even though these deaths are caused by brain errors we can't actually control, there are certainly many simple steps we can all take immediately to jog our memories, and take us out of auto-pilot. In addition to getting to the habit of checking the backseat each time you leave the car, advocacy group Child Help suggests that parents place something of their child's in the front seat to offer a visual cue that they're in the car — and that they also place a personal item they're used to needing to grab before they leave the car (a wallet, a phone, a purse, even a shoe or some article of clothing you'll obviously need) in the backseat.

Worried that might not do the trick? PreventHeatStroke.org's Plan To Remember campaign is providing parents and caregivers with free felt, gingerbread-man-shaped "CB"s, that are meant to remain in the car and serve as a visual reminder for parents to double-check their backseat for children or pets. Your CB normally stays attached to the dashboard of you car, but when you have a backseat passenger, you move it to the driver's side door, by the handle. When you get out? CB is there to provide a physical reminder that you're not alone.

As much as a reminder like CB might seem silly or unnecessary, the data clearly proves otherwise. After all, if you've ever relied on your car to beep at you if you've left you key in the ignition, or if you've ever forgotten your phone or a bag of groceries in your vehicle, then you already know how easy it is to unintentionally forget things. And while it's easy to argue that a child is obviously so much more important than a phone (and therefore, that much harder to forget) the truth is that our brains don't actually seem to be able to know the difference.

Making prevention a part of parents' daily routines is so important — it can literally save your child's life — yet, according to Kars 4 Kids, only about 15 percent of parents actually make a point to do so. So while it might be uncomfortable to admit that we are just ask likely as anyone else to forget our children in our cars, it's obvious that avoiding that reality is putting them at risk. And that means it is way past time that we accept that the only way we can begin to put an end to preventable hot car deaths is to understand that they have nothing to do with responsibility, neglect, or a parent's love for their child, and actually start trying to do things differently.