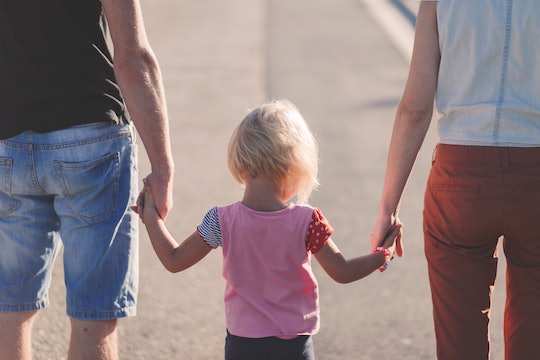 A new study conducted by the Pew Research Center revealed that most parents still think kids are better off with stay-at-home moms. I'll give you a minute to lightly bang your head against your desk. You good? It's sounds crazy, I know, but before you start to get too worked up, the study itself is sort of flawed. First of all, researchers at Pew asked respondents whether they thought that a "mom" or a "dad" should be the one to stay home, totally ignoring the fact that there are millions of families with same sex parents. The questions don't really take into account that many children are raised by just one parent.

Remember, this is a study about Americans' attitudes on parenting; it's not saying that children are actually better off one way or another, since that would be impossible to calculate. But the data is interesting, if only because it shows how slow general attitudes about family evolve. Pew asked 4,600 adults about their thoughts on working families and 59 percent of them said that it's better for kids if one parent stays home. But get this: almost half of those respondents, 46 percent, identified themselves living in a household where two parents work.

Maybe that just shows how guilty some working parents feel about balancing work and their children, because it's odd that working parents would believe they're actually doing the "wrong" thing for their family. What's a little more shocking is that 53 percent of those surveyed said that it doesn't matter who stays home, which is good, but a whopping 45 percent still think the mom should stay home. Only 2 percent think that dads should hang around the house all day (again, this survey has no information about same sex couples and relies on some old fashioned concepts of "mom and dad")

The data gets less surprising as the respondents get younger. There was 62 percent of men under 30 years old who said that one parent should work, while just 46 percent women, likely building careers, said the same. Maybe this is just a fantasy or some nostalgia for the past, because one working parent isn't feasible for most Americans. Double-income households are a necessity and dads can stay at home, too.

The survey identified "children" as under the age of 18 years old. Pre-school might not be necessary, but at some point kids usually leave the house to go to school for most of the day. So what should this one non-working parent do all day when the kids are out of the house, learning their ABCs and making friends with their peers?

Knit? Bake? Start a web series about the weird things you can do when you're home alone in the middle of the weekday? Maybe homeschool the children? There are tons of options. If one parent, of any gender, staying at home works for a family, then that's great. It's not a feasible (or even desirable) option for others. But the data does say a lot about how people cling to old notions of what makes a "normal" or "good" family. It doesn't mean they're right.