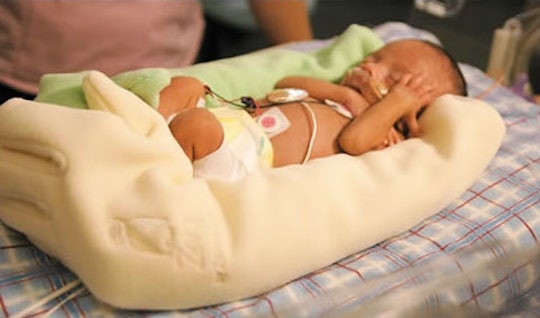 Courtesy of Nutured By Design

Fifteen years ago, Dr. Yamile Jackson went into labor with her son, Zachary. Unfortunately, Zachary arrived early, too early; in fact, Zachary was born 12 weeks before his due date. This means that, while Zachary’s vital organs had formed, many were immature and undeveloped — at best. Zachary was rushed to the NICU immediately after birth, and he would remain in the neonatal intensive care unit for 155 days. And it was in those days — during those sleepless, restless, and lonely nights — Jackson came up with the “Zaky,” pellet-filled gloves that can be used on NICU babies to help soothe and console them by simulating a parent’s touch. As Jackson explained to The Huffington Post, the idea behind the Zaky was simple:

I had a premie and I have to leave the hospital, and leaving the hospital without your newborn is very difficult...and I couldn’t imagine having my life without touching him.

But, as Jackson told The Huffington Post, her story didn’t end there — nor did the story of the Zaky:

A nurse called me about three weeks after we were home and she said 'you know those little gloves you made for Zach? Can you make them for the rest of the unit?'

Happy to comply, Jackson made several more gloves for her hospital, but Jackson also began studying premature births — combing through statistics, studies, and facts to determine how her gloves could best help preemies. Eventually, Jackson formed Nurtured by Design, and the Zaky was born, though today the Zaky is a bit different. Instead of a gardening glove, the Zaky is now constructed using anti-pilling microfleece, and instead of beans, the gloves are filled with smooth plastic microspheres which, according to the company’s website, are “antimicrobial, antiallergenic, antifungal, washable, quiet, and do not get hot under a heating source.”

The Zaky has been purchased by more than 300 hospitals in 32 different countries, according to SFGate, and the Zaky can be used by NICU babies and full-term babies, as the Zaky’s help encourage a smooth transition “from womb to the world." And I've got to be honest with y'all, while I have no experience from a NICU perspective, as a parent, this product sounds phenomenal, and it just goes to show what a difference one person can make.