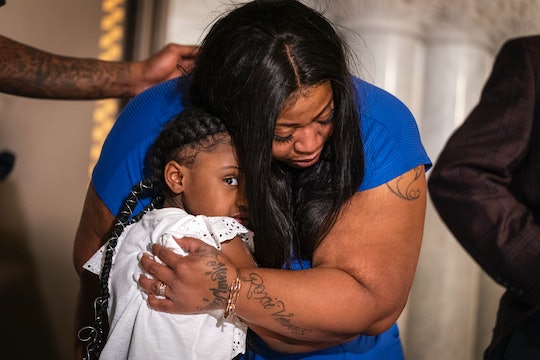 Following a weekend of protests and demonstrations across the country, Roxie Washington, the mother of George Floyd's daughter, addressed the nation in a heartbreaking press conference from Minneapolis. Speaking through tears, Washington said she wants justice for Floyd, the 46-year-old Black man who died in police custody after a white officer knelt on his neck for nearly nine minutes.

"I don't have a lot to say, because I can't get my words together right now. But I wanted everybody to know that this is what the officers took," Washington said at the press conference on Tuesday, pointing to her daughter Gianna. "At the end of the day, they get to go home and be with their families. Gianna does not have a father. He will never see her grow up, graduate. He will never walk her down the aisle. If there's a problem she's having and she needs her dad, she does not have that anymore."

Viral, distressing footage of Floyd's arrest and his last moments sparked outrage nationwide. Derek Chauvin, the officer who knelt on Floyd's neck as he repeatedly said "I can't breathe," was fired from the Minneapolis Police Department last week and was arrested and charged with third-degree murder and second-degree manslaughter, CNN reported. The three other officers involved in Floyd's arrest — Thomas Lane, J.A. Kueng and Tou Thao — were also fired. Floyd's family has called for them to also be charged.

In an interview with Good Morning America on Wednesday morning, Washington said she has struggled to explain Floyd's death to Gianna. "She doesn't know what happened," she said. "I told her daddy died because he couldn't breathe."

According to USA Today, Floyd had moved from Houston to Minneapolis for work and remained active in Gianna's life. While speaking with Good Morning America, Washington said that Floyd did everything for his daughter and wanted her to "have the best."

"He would put her on his shoulders," she said. "She didn't have to play with nobody else because daddy was gonna play all day long. And they played. And they had fun." In her first time speaking out on television, Gianna said that she wants everyone to know "kinda that I miss him."

During a vigil in Houston on May 26, Washington described Floyd as "a gentle giant," according to the Houston Chronicle. "People mistake him because he was so big that he was always a fighting person," she said, "but he was a loving person...and he loved his daughter."