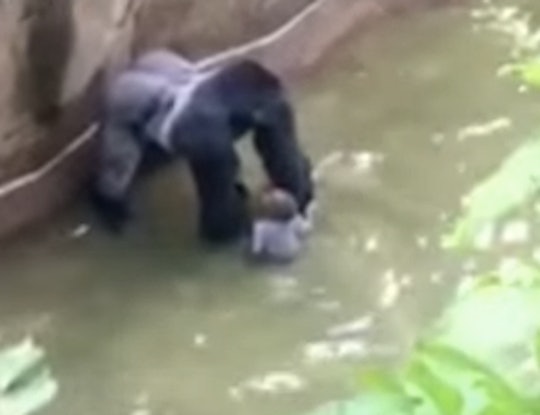 After a 3-year-old boy fell into the Cincinnati Zoo gorilla enclosure on Saturday leading a 17-year-old silverback gorilla to be shot, there were public calls for the parents or the zoo to face criminal charges. But, on Wednesday, Cincinnati Police said they will not charge Michelle Gregg, the mother of the boy, or her husband, with any crime. But now that police say no charges should be filed against the mother in the Cincinnati Zoo incident, will that satisfy her hoards of haters? Let's hope so, because Gregg's been through enough this week.

The Cincinnati Enquirer reported that Hamilton County Prosecutor Joe Deters will review the investigation to see if he thinks charging Gregg would be appropriate and will make a final determination by the end of the week. There has been public outcry, asking law enforcement to charge Gregg with criminal neglect, including this online petition, which has signed by more than 60,000 people. It seems that filing any charges against Gregg would be a sad effort to exact revenge, which won't bring Harambe back and only obscures the real lesson out of this whole situation — sometimes terrible accidents happen, even to good mothers and gorillas. All we can do is try and be kind.

It started with a 911 call that's now been made public. It's hard to listen to, a terrified mother pleading with her baby to "Be calm." On the call you can hear her explaining the scene. "He's dragging my son," she said. "I can't watch this... I can't watch."

As a mom, it's like listening to your own worst nightmare played back. Your baby in danger while you helplessly look on.

Thankfully, Gregg's son is doing fine, recovering from a concussion and a "few scrapes," the family said in a statement, the Enquirer reported. After a visit to the doctor to follow up later in the week, the family was reassured the boy is going to make a full recovery.

I hope the same could be said for Gregg, whose suffered a lot more than a few scrapes this week. Questioning whether Gregg is a negligent parent is more than just a personal criticism — it's a professional one. She's the manager of a Cincinnati early childhood education center called Little Blossoms Academy, the Enquirer reported. The school released a statement saying Gregg was home with her son and asked for privacy. The statement asked "both the media and the public respect our learning environment and the privacy of our staff and families," according to the Enquirer.

Gregg isn't a negligent mother. In fact she's so responsible with the well being of children that she was put in charge of managing an early childhood education facility.

Gregg isn't looking to parlay the terrible incident into any kind of notoriety. In fact, she and her family have declined every interview request and released a statement that they would not accept any donations, the Enquirer reported.

We are thankful to the Cincinnati Zoo for their actions taken to protect our child," the family's statement said. "We are also very appreciative for the expressions of concern and support that have been sent to us. Some have offered money to the family, which we do not want and will not accept. If anyone wishes to make a gift, we recommend a donation to the Cincinnati Zoo in Harambe's name.

How's that for class in the face of horrible scrutiny? Is it really so impossible to mourn the tragic loss of Harambe and be glad Gregg's son is safe too? People need to stop assuming Gregg must have done something terrible to cause this, because now even the police agree that it was a terrible accident rather than some criminally negligent mothering. So let's all close the case on that.

Yes, Gregg has had one hell of a bad week. But there have also been a few blessings — the safety of her son most important of all. But out of this terrible incident, maybe we can all learn something. A little more kindness and compassion, for one. And maybe that leashes for kids at the zoo aren't such a bad idea.