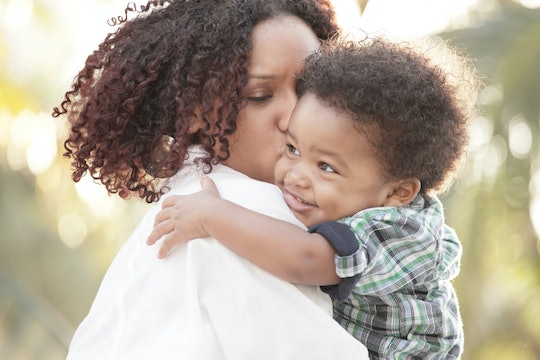 Motherhood Apparently Ages You Faster Than Smoking, But Don't Freak Out

It's no secret that parenthood takes a toll on a person's body. From the physically exhausting newborn months, to the meltdown-laden toddler years, to the stressful demands of attempting to shape a young child into a responsible adult, each stage of child-rearing has its challenges. And it seems mothers, in particular, bear the proof of this stress. We have the wrinkles, the grey hairs, and the permanent dark circles under our eyes as "badges of honor" for our hard work and sacrifice. In fact, motherhood apparently ages you faster than smoking, and it totally makes sense.

A new study published in the journal Human Reproduction suggests that motherhood actually changes a woman on the cellular level. For real! Researchers at George Mason University in Virginia wanted to better understand how giving birth and motherhood affects women's genetic structure, Medical Daily reported. A total of 2,000 women between the ages of 20 and 44 were included in the study, during which researchers compared the telomeres of women with children to the telomeres of women without children. What these researchers found was that mothers' telomere shortening was comparable to woman who were 11 years older and childless.

So you're probably wondering: What the heck are telomeres anyway? A simple explanation is that they're the end portion of a chromosome that's associated with longevity, the New York Post explains. As a person ages, their telomeres shorten — so experts typically relate longer telomeres to better health and a longer life. Check out the video, below, for a better visual of what this study examined.

As you might imagine, the more children a woman had, the shorter her telomeres — but only after a certain number of kiddos, researchers found. "We were surprised to find such a striking result," Anna Pollack, one of the study's researchers said, as Newsweek reported. “We found that women who had five or more children had even shorter telomeres compared to those who had none, and relatively shorter relative to those who had one, two, three, or four, even.” Even more telling: Researchers found that the shortening of telomeres in mothers was greater than that of smokers or people who are overweight, the New York Post reported. Overall, participants in the study lost about 10 base pairs of DNA each year. However, women with children had 116 fewer base pairs than women who were the same age but didn't have children.

Of course, it's not exactly news that having children takes a toll on a woman's body. I mean, just ask any mom. "Anecdotally, just chatting with my friends who have children, we all do feel that having kids has aged us,” Pollack said, according to Newsweek. “But scientifically, this does fit with what we understand pretty well." She continued:

We know that having kids is associated with a higher risk of heart disease and diabetes. And some large studies have liked telomere length to mortality risk and risks of other major diseases.

At this point, many moms are probably asking themselves, "Why did I decide to have children, again?" Here's a bit of good news: This study's findings don't necessarily mean mothers are going to drop dead 11 years earlier than their childless counterparts. (Whew!) In fact, as the Daily Mail reported in 2016, moms who give birth in their 30s are more likely to live longer. So rest assured, moms: There are many other factors to take into consideration when it comes to a person's life expectancy.

To me, it comes as no surprise that women who are mothers age faster at a cellular level than women who are childless. I am floored, though, that the effects are greater than smoking and being overweight. It just does not compute.

I don't know about you, but I feel like I've aged significantly since becoming a mom back in 2011. (If you compare photos of a pre-kid me to my current state, it certainly appears that more than seven years have passed.) Now that we have the proof that motherhood ages us faster at the cellular level, maybe we can use that as a form of leverage over our partners and children? Hey, it couldn't hurt to try.