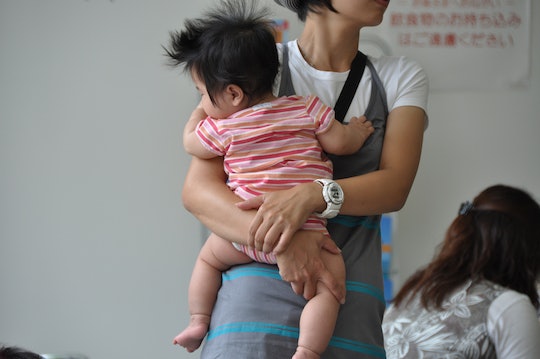 Motherhood Can Be Lonely, So Sometimes I Daydream About Living On A Commune With Other Women

The first thing I learned after my twins were born is that all of the mom clichés you always hear are pretty much true. Even though no one warned me how lonely motherhood is, the love you have for your kids is like no other; your world changes in ways you never thought possible; you see everything differently; all the things you were worried about giving up before your kids arrived no longer seem like a big deal. Basically, almost all of the things that people with kids say that I used to roll my eyes at were now coming out of my own mouth (or at least running through my head).

I feel so grateful and privileged not only to have my two hilarious little humans, but to also be able to stay home with them full-time and get to be the person who watches them grow. I can’t really relate to the bittersweet feeling my husband gets when he comes home from work after the kids have already gone to bed, asking about all the cute things they did that day, knowing that he missed seeing them for himself. The notion that my time with my children is finite — that before I know it they’ll be off to school, and then old enough that they’ll prefer to spend time with their friends over us, and then eventually leaving all together to embark on their own independent lives — hangs around in the back of my mind every single day. It reminds me not to take this time for granted (which, I’ll admit, is incredibly easy to do sometimes).

But there’s another hard truth about motherhood, another tired cliche I’d heard countless times and never really understood until I became a mother: Motherhood is lonely. Really, really, freaking lonely.

It feels almost shameful to admit this, as someone who gets to spend as much time with her children as she wants, knowing that there are so many mothers out there who don’t, mothers who hardly even have time to bounce back from delivery before they have to get back to work. There isn’t one hard-and-fast rule for what motherhood should look like. Some women prefer to work and set a shining example for their children. There are other women who stay home for financial reasons, even though they would prefer a desk and a day job. I don’t envy or judge other women for their decisions. My privilege doesn’t make my reality any less real: staying at home with your kids feels incredibly isolating.

Of course, like most other SAHMs, I try to combat this by ferrying us out to a variety of activities and drop-in, kid-centered gatherings. We go to a playgroup in the afternoons. We have playdates with other kids of similar ages. We visit parks and petting zoos and splash pads. We do all of the stuff. But all it really makes me realize is that being around other people doesn’t necessarily make you long for social interaction any less.

Recently, I met up with my dear friend Shannon I hadn’t seen in a long time. She’d been living in another country for a few years, where she’d had her first child, but had since returned back home, albeit to a different city about an hour or so away. By the time we had a chance to meet up again, I’d also become a mother, and she’d had her second child. We went to visit one day, and it was magical. To my exhausted, lonely, burned out mom self, seeing Shannon felt like coming up for air.

Ask any mom and she’ll tell you that making mom-friends is complicated. Not only do you have to meet other moms (a hard task unto itself), but you have to find like-minded mom friends. Motherhood is so fraught with judgment anyway, full of so-called experts telling you which method or philosophy is the right way to do things, that finding people who feel more or less the same about raising kids can be really difficult. As much as I’d like to tell myself I’m open-minded and that everyone has the right to reasonably do what they think is best for their children, I know for a fact I’d have a really hard time being your mom-friend if you spanked your kids, or if you were staunchly against vaccination (sorry, not sorry — vaccinations save lives).

But in Shannon I found The Holy Grail of friends — someone I genuinely love as a human being, and someone I also adore as a mom. Her kids are fantastic, and I learn so much from her example. She's laid-back, doesn’t judge, always reminds me that it’s OK to make mistakes, it’s OK to get frustrated, and it’s OK to need breaks. But the best part is that when we see each other (which happens not nearly as often as I’d like), we make each other’s job so much easier. We become a tiny parenting tag-team.

Our collective brood of four becomes communal: kids who all need to eat and be changed and reminded that they aren’t allowed to climb on the dinner table or draw on the floor. While she prepares lunch for the group, I hold down the fort, reading stories or kissing boo-boos or mediating toy turn-taking. It’s no less work for either of us, there are no fewer tasks than we’d already have to do ourselves at home, but it feels like so much less because we have each other. Someone to talk to and bounce ideas off of. Someone to back us up and someone to think of solutions. Someone to be there. Someone who gets it.

Each time we visit, we joke about moving in together, “co-momming” it while our husbands are at work. We fantasize about what it would be like if we won the lottery and could build our own little mom commune, where other moms just like us could come together and help, talk, and support each other. While neither of us are really serious, it reflects a need I think a lot of modern mothers have these days: We need our people. We need the village.

Being at home alone with my kids, I can’t help but think that this is not how it was meant to be. It’s nice that we’re able to start our own families in our own homes, with our own rules and expectations and ideas about what kind of family we want to create for ourselves. But the side effect of that opportunity is that raising kids becomes in many ways a solitary activity. We make decisions largely on our own; we figure things out by doing; we worry about whether we’re doing it right. And then, when we are around other parents —other people also doing it largely by themselves — we compare our progress to theirs, trying to figure out if we’re doing OK or better. No wonder we feel so much pressure.

On my mythical mom commune, I’d like to think there wouldn’t be the same feeling. We wouldn’t have to judge each other or compare or worry, because we wouldn’t be solely responsible for how our children are being raised. We could ask each other for help, learn from each other’s experiences, benefit from the ability to have other people around. As much as motherhood matters, as much as being there for your children is important, maybe it’s not enough. Maybe women with kids need other people that they can rely on, too. Maybe we all do.