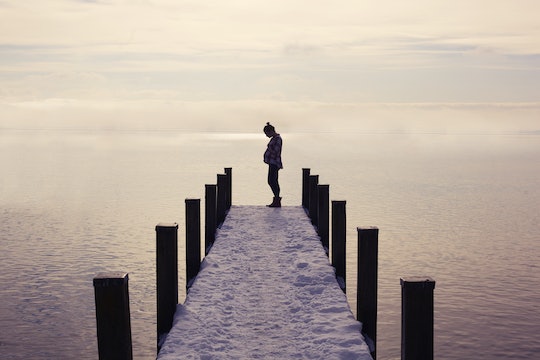 Motherhood Didn't Make Me Healthier — This One, Tiny Decision Did

The birth of my daughter signified a shift in my priorities and the undeniable fact that the only thing constant in life is inconsistency. Becoming a mom didn't change everything, though. I didn't take the best care of myself when I was pregnant, and I was eventually ordered on bedrest as the result of pregnancy-induced hypertension. Then, shortly after my daughter was born, I was diagnosed with postpartum depression (PPD). So motherhood didn't automatically make me a healthier human being, but there was one, tiny choice I eventually made that helped. This small decision pulled me out of the overwhelming fog that was new-mom life, and the utter darkness of postpartum depression, so that I could become the mom, and the woman, I knew I always could be.

When I was struggling to adjust to life as a new mom, my day-to-day routine didn't just feel difficult — it felt impossible. Postpartum depression consumed me, I failed at breastfeeding and went to formula, and I felt as though I failed at feeling grateful for this beautiful baby, my partner, or anything else I had in my life. Before I knew it, I couldn't help but feel like I was failing at living. I started to feel like a prisoner inside my own skin. My thoughts became askew and I was spiraling out of control until I found myself feeling so isolated that, on the lowest of days, I truly believed the only way back to "normal" was to die. I couldn't even verbalize what was happening in the corners of my mind, let alone speak up enough to ask for help. I was lost, even though everyone could still see me. I was screaming internally, but when I opened my mouth I couldn't bring myself to make a sound.

Those symptoms would later lead to my postpartum depression diagnosis. It was the longest, loneliest year of my life because I knew something was wrong, but couldn't account for my thoughts or feelings when I could simultaneously and rationally tell myself I had so much to be thankful for. When I think back, I'm sad for that young woman who fought so hard to get out of bed every morning. The mom who loved her baby more than the air she breathed, but couldn't gather enough strength to love herself. I look back on that time as a difficult, but necessary turning point — not just for the mom in me that wanted to fully embrace parenthood, but the little girl in me that always hoped she'd live the life I finally had.

My thoughts became askew and I was spiraling out of control until I found myself feeling so isolated that, on the lowest of days, I truly believed the only way back to "normal" was to die

When my doctor told me I had postpartum depression he immediately started me on a medication, directed me to treatment, and offered other suggestions to alleviate some of the symptoms I'd been experiencing. One suggestion was a pretty simple one — exercise. I argued with him, though, saying I hadn't felt like waking up each day, so how would I find enough strength or energy to do anything physically demanding? And for a while, I really couldn't. So I didn't. I continued to wade through my foggy days and insomnia-ridden nights. Then the medicine took affect, the therapies pulled the weights off my shoulders, and I made the best decision I had ever made as a new mom: I started taking short walks with my newborn daughter.

Though I had a significant amount of postpartum weight to lose, I hadn't intended for those walks to be exercise. In fact, I kind of hated pushing that damn stroller around with an usually fussy newborn inside; the sunshine burned my eyes, the air bit into my skin, and the lives that surrounded me were in such constant motion that I was exhausted. Those walks, however small and seemingly innocuous, completely and utterly drained me.

After a few weeks, though, something happened. Not only did the heaviness begin to lift, but I found myself crying less and smiling more. I felt lighter in a complete sense, and I started looking forward to those short walks with my daughter. I was starting to spend more time outside, simply walking, and that small amount of exercise helped me drop a lot of my pregnancy weight (which also helped re-build my self-esteem). Then, without me even realizing it, my walks gradually morphed into running.

Then the medicine took affect, the therapies pulled the weights off my shoulders, and I made the best decision I had ever made as a new mom: I started taking short walks with my newborn daughter.

In the beginning I hated the running just as much as I hated the walking. I was always out of breath, and those sharp, dizzying pains that stung my lungs were never pleasant. But when I returned home after every single run, I didn't flop back onto the couch and cry. Instead, I noticed things changing. Smaller things. I wanted to eat better, I wanted to stretch as a form of meditative yoga, and I wanted to focus on being present with my daughter and my partner. Somehow, someway, those five minute walks (along with whatever medicine and therapy I still had left), helped pull me from the darkest period of my life. I didn't realize the power something so small had at the time, but if I didn't choose to walk, and then run, with my daughter every day, I'm not sure I would still be here.

Since then I've traded in a quick walk around the block for a couple dozen races, specifically marathons ranging from 5k-50k. I was never active as a child, so I never imagined I was capable of running at that level. It wasn't easy, and I know without a shadow of a doubt that postpartum depression changed my life, but because I pushed through and decided to do something for myself, and myself only, my kids have a healthier, more present mom than they would've had if I'd not forced myself out of the house for those morning walks. If I'd not made the conscious decision to do the same after my son was born, five years later, I'd still be fighting those sinister voices in my head. Sometimes it's the smallest decisions that create the biggest changes in our lives. I'm proof.