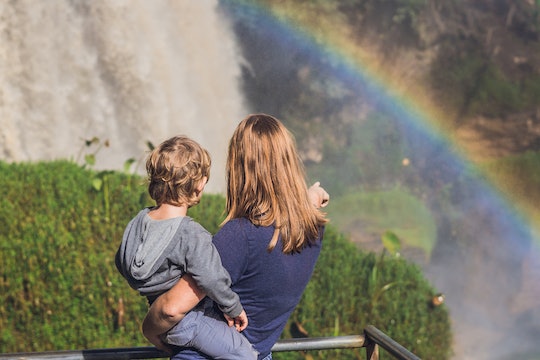 What We Don't Say On Social Media About Motherhood

While I was pregnant with my son, I started following a bunch of Instagram profiles of women who I can only really describe as “mom celebrities.” They have huge followings, some of them are bloggers or nutritionists or experts in one field or another, but some of them seem to be just regular ol’ moms with beautifully curated feeds that have amassed thousands and thousands of followers. I remember looking at one photo in particular, in the days leading up to my sons birth: a woman half-naked in a birthing tub being cradled by her husband; her face was stoic and calm. She was in the throes of labor but her enviable brows remained smooth, her forehead uncreased. In the two years since my son was born I have followed many of these “momlebrities” through the first years of their children’s lives. Some of them I have spoken to directly and commiserated with, or asked questions about things that they have posted, and I feel like I know them. They have shared the most intimate parts of their life so openly that it feels like they are an old friend whose family photo album I am flipping through instead of a stranger I met online. The trouble is, when you look closely you start to realize that all you see are the pretty parts of their lives. There are no photos of the bleary eyes, the shirts covered in spit up or breast milk from swollen leaky boobs, or the tantrums — and if there are photos of any of these things they are perfectly lit and still manage to appear aspirational. When you look close enough you realize that most of the images portraying motherhood on social media just aren’t real.

As someone who doesn’t work a typical 9-5 job and has pieced together several “side hustles” to replace my full-time income while I am home with my son, I rely on social media for a fair amount of my work. In the last two years I have been following and interacting with lots of moms that I would not have met if it wasn’t for Instagram. Social media does have some really great aspects: it makes the world feel a little bit smaller. I have found inspiration on social media for everything from home decor, recipes, fashion, and activities to do at home with my son. I have gotten jobs from Instagram, met women and formed friendships and collaborations that have meant the world to me personally and professionally. As amazing as that is, there is a darker side to having the ability to “see inside” other people’s lives in this way.

Scrolling through photo after photo of perfectly dressed families posing outside on their beautifully decorated front porches, you forget that this isn’t what most people’s lives look like. Some of these images are taken with professional cameras or are tinkered with using filters. The levels of brightness are adjusted and then uploaded and passed off as though they all #wokeuplikethis. The truth is that one beautiful photo you see posted may be the one photo they kept after deleting a dozen others that didn’t make the cut.

I know this because I have done it myself.

There may be women posting images of the more raw and real aspects of motherhood but they are buried under the thousands of images of some unattainable image of perfection.

Do a quick scroll through what comes up when you search #motherhoodunplugged on Instagram and you will see nothing but beautiful, well-lit photos of happy people. Photos of thin framed women sporting a perfectly formed baby bump holding letterboards with some clever quip about pregnancy written on them or photos of immaculate baby nurseries with furniture straight out of a pottery barn catalog and impossibly clean, white carpeting. When I stop to really think about it, what does this hashtag even mean? If the “unplugged” is meant to be taken literally, as in unplugged from technology, it’s a big fat contradiction, because you are clearly not unplugged if you are posting on social media.

If it is meant to be more symbolic and representative of a more raw and natural look at motherhood (like an MTV unplugged set back in the ‘90s) then these perfect photos of glamorous women nursing their perfect little babies in full makeup that fill my screen are missing the mark entirely. What's even more dangerous is that some of these women are receiving items for free or being paid to wear certain brands in their photos are aren’t always forthcoming about it.

One of the first few photos that came up in my search for #motherhoodunplugged is a beautifully lit photo of a woman dressed in yoga pants and a sports bra working on a laptop while simultaneously riding an exercise bike. This does not seem unplugged to me in either the literal or figurative sense.

Look, I get it. Many women are using Instagram to fuel their careers and no one is going to want to buy something from a woman who is posting dark, blurry photographs of herself, looking like she just rolled out of bed after being up 18 times from 10 p.m. to 6 a.m. with a teething six-month-old but these photos that looks like pages from a catalog just aren’t fair. Not only are they sometimes quite literally selling us something but more troublesome is that they are selling us on an image of motherhood that just isn’t real. There may be women posting images of the more raw and real aspects of motherhood but they are buried under the thousands of images of some unattainable image of perfection that leave me feeling like my life just doesn’t measure up. Even earnest attempts to be honest about motherhood are doomed because real life isn’t curated.

Next time you are scrolling through your feed and you stumble across a photo that makes you feel like the people in it have perfect lives or it makes you feel like you somehow aren’t good enough remember: people only show you what they want you to see. As much as connection with other mothers is crucial, we need those connections to be genuine and unfiltered. After all, If you want to see the real motherhood unplugged, you are not going to find it on a screen.