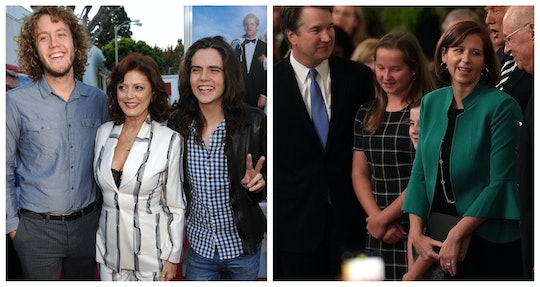 Mothers Of Sons vs. Fathers Of Daughters: The Cage Match

Here we are at the end of time, riding the backs of our toddlers into battle: fathers of daughters versus mothers of sons. How did we get here, and what can our battle cries tell us about our inner moral compass? Let us take off our MAGA caps and knit pussy beanies for a moment and examine the most abundant characters in this morass: those who speak as a father of daughters, and those who speak out as concerned mothers of sons.

Who are the fathers of daughters? They are the late-awoken cool guys who press their progressivism and Polartec vests through a “daddy's little girl,” extractor. They are defensive old men with waddles who don’t even pretend to be blind to gender in the way they are "colorblind" and sure of racial equality, but instead hoist women onto a weird platform of "separate but better looking" in town halls, and in the halls of Congress. They are tough men suddenly touched by the sight of tiny pairs of ovaries running around in their image; they are not afraid to change a diaper; they are committed to racist policies, except when their daughter marries someone with darker skin; they are somehow endearing, safely neutered, forgiven of their war crimes when they are seen as a bumbling old daddy with a gorgeous Grown Daughter on his elbow. (Walking their daughter down the aisle is the most important job they'll ever do.) They are Mitch McConnell. They are Matt Damon. They're learning what a vulva is. They coach b-ball. They French-braid. They have the conch.

Then there are the mothers of sons.

They are #boymoms practicing balance-yoga, third-wave feminists and intactivists with very dark eyebrows who aren’t afraid to get political in front of the neighbors. They are the women with gel manicures who see men getting picked off by MeToo'ers and can’t help but worry it will be their husband or son next. They write letters to judges pleading leniency; they are the only person who could love a murderer; they are women who realize their power after birth, but still focalize it through the product of that labor: their child. They have color-coded bookshelves. They were careless at the River Styx. They are not barren! They are @BlueStarNavyMom3 posting proud polemics on Twitter that assert, "This is MY son": a pristine and eligible man too scared to date in this "current climate of false sexual assault allegations." They are, it seems, embarrassing the hell out of their sons.

(Being both — a mother or father of a daughter and a son — is a Wild card. You simply never know if their family photo wall is going to feature a 6-year-old in a princess gown toting a pink AK-47 or a little boy wearing a "Cancel the patriarchy!" t-shirt.)

It’s all understandable: the urge to hold up the most precious thing in your life and say, “But this!!!” All anyone is really saying is “I do care about some things on this cynical earth” — even Mitch McConnell. But in this wacko chess game, you only get so many big moves. "Prove that you love children!" sets a very low bar and assumes a bad-faith motive on the part of the idiots on the other side.

It is all projection. The purported brother of the fancee, fine Navy son tagged with #HimToo on Twitter by a proud mom told the Huffington Post, "My mom has good intentions. But she wasn’t trying to be a proxy. She’s posted on Facebook about her single eligible sons and tried to get them dates many times over the years."

In other words, Mom/dad stopppppp.

The problem with most of the arguments that start "as a __ of a __" is that no one, on either side, is pretending that you don't have your child's best interests at heart: putting your family first, everyone else be damned, is the whole point.