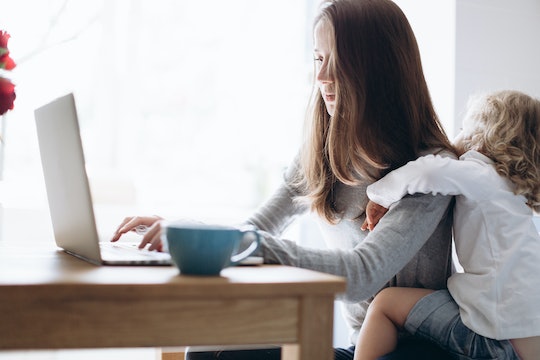 It's no surprise that women don't earn as much as their male counterparts, but a new report by the Institute for Fiscal Studies (IFS) found that mothers are hit with a separate "pay penalty," meaning they don't always get the pay raises they deserve. The research shows that, by the time a couple's first child reaches the age of 20, many mothers earn one-third less than fathers, which the researchers think is largely thanks to the fact that women work part time during motherhood. While it makes sense that working part time would earn someone less money than someone working full time, we live in a culture that pushes women to be the primary child-rearers, thus robbing them of wages comparable to what a man would make.

Just two years ago, in 2016, women with full-time jobs in the United States earned "80 percent of what men were paid" — that's a 20 percent pay gap, according to The American Association of University Women. While the gap has gotten smaller since the 1970s as more women seek higher education and enter the workforce, the rate of change between 1960 and 2016 means that women are still not expected to reach pay equity with men until 2059. In fact, the progress started slowing down in 2001 and has somewhat stalled over the years — if it continues to stall, The American Association of University Women projects that men and women won't earn the same wages until 2119.

And part-time workers, the majority of whom are women (and many of whom are mothers), are facing "virtually no wage progression" to combat the pay gap, according to IFS associate director, Monica Costa Dias, Metro reported.

Essentially, when some women become mothers and start to work part-time, they may miss out on a major benefit of full-time employment: higher pay with increasing experience. The IFS report focused on part-time workers who were all women — and most of whom were mothers of young children, according to the BBC. It found that graduates were affected the most. That's because, if these women didn't have children, they'd have been continuing in full-time work with the most room for progression.

For example, the report looked at one graduate who worked full time for seven years before having a child (among many other women). If that graduate had continued to work full time for another year, she'd have seen her hourly wage increase by six percent on average, according to the BBC. But if she switched to part-time work, her wage would not have progressed at all.

Another woman told the BBC that she couldn't believe she was forced to choose between motherhood and her career in the National Health Service (NHS). "I was subsequently told by my manager in the NHS that, while I was part-time, I would never get anywhere working for him," Lynsey Reynolds, a mother of twins who was working in finance in the NHS, told the BBC. "I ended up leaving the NHS to work for a smaller organization."

Mother-of-two Cat McGrann told the BBC that she earns just over $600 a month after nursery fees, but if she'd worked full time and had needed child care, she would have only taken home under $400 at the end of the day, thanks to a lack of access to affordable child care

The average cost of daycare in the United States, for example, is $11,666 per year (or $972 a month), according to the National Association of Child Care Resource and Referral Agencies. Prices range from $3,582 to $18,773 a year (or $300 to $1,564 monthly), which means that, regardless of how inexpensive your daycare center feels comparatively, it still costs you a pretty penny.

"What was a choice is now a trap," she told the BBC. "For most families [part-time work] is a financial necessity and women take the hit with diminished careers, missed promotions, lost earnings and lower pensions."

Along with graduates, the highest-educated women are significantly impacted by the gender pay penalty. "It is now the highest-educated women whose wages are the furthest behind their male counterparts — and this is particularly related to the fact that they lose out so badly from working part time," said Robert Joyce, associate director at the IFS and co-author of the report, according to the BBC. This comes in contrast to the fact that lower-educated women used to be the ones whose wages were particularly low relative to similarly educated men.

While it makes sense that working part time would earn women less money than if they were to work full time, the gap is considered a "pay penalty" because men's wages do increase when they have children, according to The New York Times. In fact, men’s salaries see a 6 percent increase after they become fathers, The New York Times reported.

Even when factors like experience, education, hours worked, and spousal incomes are taken into account, fathers still earn more than mothers. It’s perhaps because fathers will sometimes work more after having children but, according to research led by Michelle Budig, a sociology professor at the University of Massachusetts, Amherst, those factors only explain 16 percent of the male bonus. Women tend to work less or accept lower-paying jobs with more flexibility, but that only explains one-quarter of the pay penalty.

“A lot of these effects really are very much due to a cultural bias against mothers,” Shelley J. Correll, a sociology professor at Stanford University and director of the school’s Clayman Institute for Gender Research, told The New York Times.

Joyce believes that new legislation in the U.K. that requires companies with more than 250 employees to publish their gender pay gaps "could be part of the solution," since some women may not be aware that men are paid more than them. For example, the Act to Promote Transparency of Pay Structure in Germany, which passed the parliament last year and just recently came into effect, according to USA Today, intends to help employees better understand whether they’re being paid fairly by making their coworkers' salary information accessible if they're in the same job description category.

But the law only enforces employers to share that information — it doesn’t oblige employers to rectify these situations should women discover that they are indeed being paid unfairly. And it also places the burden on women to correct the issue for themselves when, instead, part-time employers (and all employers) should just be treating all employees equally and checking in quarterly to discuss their progress and any room for advancement.

More Like This
Mom On TikTok Asks Daughters Why They Want To Be Boys & Same, Girls, Same
Julia Fox’s Apartment Tour Is Peak Mom Realness
Paris Hilton Is Officially A First-Time Mom
10 Of Julia Louis-Dreyfus' Best Quotes On Motherhood & Raising Her Sons
What Parents Are Talking About — Delivered Straight To Your Inbox