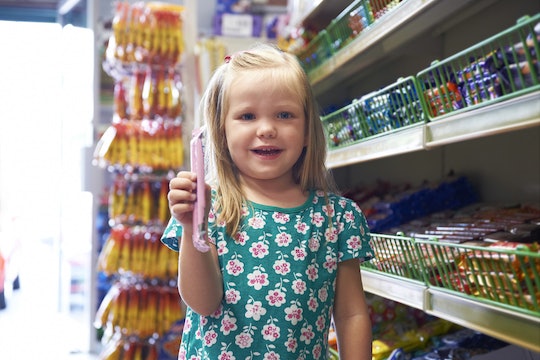 Unhealthy Choices Might Be Caused By This Checkout Line Staple, Study Finds

As people become more conscious of promoting healthy eating, one big question is how to reduce unhealthy purchases. There's actually one simple thing that stores can do. According to a new study, moving sweets away from checkout lines may reduce unhealthy snack purchases. And it makes perfect sense!

Plenty people have gone into the store for one thing and somehow walked out with a candy bar or a bag of chips in tow as well. They're never really on your shopping list but, when they're right in front of you at the checkout, they become harder to resist.

The study, published in the journal PLOS Medicine, examined how to limit unhealthy purchases in stores. Thanks to public concerns and campaigns, some supermarkets in the UK have implemented policies to reduce less-healthy food at checkouts, as noted by the study's abstract, so researchers decided to see what effects those policies had.

A team of researchers at the universities of Cambridge and Stirling and Newcastle University analyzed data from the Kantar Worldpanel's Consumer panel for food, beverages, and household products, as reported by Science Daily. Their results seemed to suggest that these policies may actually work.

Researchers found that 17 percent fewer small packages of sugary confectionary, chocolate, and potato chips were bought and taken home from supermarkets immediately after introducing a checkout food policy, according to the study's abstract.

In addition, according to the study's abstract, 76 percent fewer purchases were bought and eaten 'on-the-go' from supermarkets with checkout food policies compared to those without. More research needs to be done because this wasn't a randomized control trial, but it could mean that these sorts of policies may make a big difference.

Dr. Katrine Ejlersko, the study's first author, said of their findings, according to Science Daily:

"Our findings suggest that by removing sweets and crisps from the checkout, supermarkets can have a positive influence on the types of purchases their shoppers make ... This would be a relatively simple intervention with the potential to encourage healthier eating. Many of these purchases may have been impulse buys, so if the shopper doesn't pick up a chocolate bar at the till, it may be one less chocolate bar that they consume."

You might be familiar with the term "impulse buy" already. It's a common behavior in shopping today. Impulse buy refers to an unplanned decision to buy a product or service that you make right before making the purchase.

Companies and businesses knew all about impulse buys, which is part of why they place candies near the checkout line. You have to think of candy as a seasonal product, as noted by Lifehack, with major purchases occurring around holidays like Halloween.

The rest of the year, candy bars don't make it on most people's grocery lists. So, companies rely on impulse buys and a concept called decision fatigue. After making a bunch of decisions about what to buy in a store, you get a bit fatigued, Lifehack noted, so when you see those candy bars near checkout, you're more likely to impulsively grab one.

This new study focused on stores within the UK, but supermarkets have tried similar strategies in the United States. In 2015, some stores tried healthy checkout lanes.

“We’re learning quickly that our customers want more of this,” said Raley's company spokeswoman Chelsea Minor, according to Today. “[We recognize] the challenges for moms and dads who are going through those check stands and their children are quickly distracted by treats.”

Hopefully, noting their success in the past and across the pond, stores across the United States will pick up junk-food free checkout lanes again. It'd make your next trip to the grocery store just a bit easier.