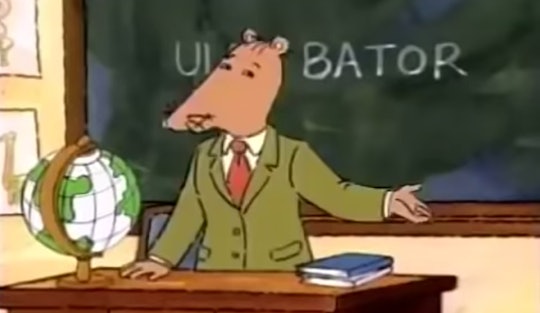 A Character On ‘Arthur’ Came Out As Gay & Got Married

I don't know about you, but I have a tendency to overanalyze kids' TV shows. Like, I have so many questions about Paw Patrol, and how that town is set up in general. And where the heck are Max and Ruby's parents? When it comes to the beloved show, Arthur, I also looked into things a bit excessively. And more than once I've wondered: Is Mr. Ratburn attracted to other men? Well, as it turns out, Mr. Ratburn on Arthur comes out as gay — and even gets married in Season 22 of the beloved children's show.

To answer the first question that has probably come to your mind: Yes, PBS is still airing new episodes of Arthur. (Who knew?) And according to TV Line, the Season 22 premiere begins in a pretty epic way: with the show finally confirming Arthur's teacher's sexuality. An episode titled "Mr. Ratburn and the Special Someone" features the well-spoken and witty educator marrying the love of his life. And that special someone just happens to be a guy.

According to IMDB.com Arthur the TV series premiered on PBS back in 1996. Meaning that millennials basically grew up watching it. And although Mr. Ratburn was clearly well-dressed, -spoken, and -read, few details about his personal life were shared on the series. (Which makes sense, considering he's just a supporting character.) That's all history now because viewers just got a front-row seat to Mr. Ratburn's wedding. Head on over to PBS and watch the entire episode for yourself!

During the episode, which premiered on Monday, May 13, Arthur and his friends learn that Mr. Ratburn is engaged, according to TV Line. And they're shocked. This is because — as everyone knows — teachers can't possibly have personal lives outside of school. “When they go home, they sharpen pencils, eat kale and dream up homework assignments,” Buster tells his pals, according to TV Line.. “They don’t even sleep! They just go into low-power mode and watch documentaries.” (LOL. Sorry to burst your bubble, dude; I'm married to one.)

When Arthur and his friends spot Mr. Ratburn having lunch with aa blunt and demanding woman, they conclude their teacher can't possibly be happy marrying her. In fact, they decide he'll be miserable, therefore making their lives at school miserable. So they plan to object at his wedding.

However, when Ratburn's students realize who he's actually marrying, they ultimately call off the intervention. And so, their teacher marries the man of his dreams.

Kids today might not think Mr. Ratburn having a same-sex marriage is a big deal. (Which, it isn't. Love is love.) But for millennials who grew up watching the series, this episode confirms a long-held suspicion that had never been directly addressed for more than 20 years. Twitter seems equal parts impressed by the show's writers and supportive of the fact that Mr. Ratburn has come out of the closet., according to Pride. One person tweeted, "MR RATBURN IS GAY HELLO !! HE GOT MARRIED !!"

Another Twitter user wrote, "So I was watching the new episode of Arthur and they just confirmed Mr.Ratburn is gay by him having a same sex marriage. Wow...that’s huge for them to do."

Yet another person tweeted, "Guys mr. ratburn from arthur is gay this is the absolute best thing you’ll see all day we stan."

Another person chimed in with, "MR. RATBURN IS CONFIRMED GAY," repeated over no fewer than nine lines.

Honestly, I'm loving the fact that Mr. Ratburn is happily hitched. And that the show's writers decided that his marrying a high-maintenance, rude woman was way more of an issue for Ratburn's students than it was that he was marrying a man. Congrats to Mr. Ratburn on his beautiful wedding!