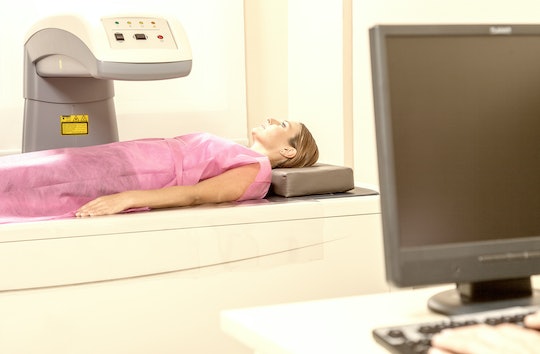 Doctors Might Be Able To Predict Pregnancy Complications Soon, & It Could Help So Many Expectant Moms

It's common practice for doctors to perform blood tests, ultrasounds, and serum screenings to detect birth abnormalities and other issues in pregnant people. Sometimes, though, these procedures can be invasive, which could make the testing process uncomfortable for some patients. But, thanks to a new technique discovered by California researchers, MRIs might help predict pregnancy complications, potentially changing the future of prenatal screening.

Scientists at the University of California-Los Angeles have recently developed a new way to scan the placenta using magnetic resonance imaging — or MRI — and more accurately determine the presence of any issues or defects, according to a new study published in the Journal of Magnetic Resonance Imaging. The non-invasive technique, the researchers say, will allow doctors to measure the amount of blood that flows into the placenta and reaches the womb, thus giving them a better understanding of how much oxygen and nutrients sustain the growing fetus during early pregnancy.

The UCLA scientists used MRI scans to test blood supply in 34 pregnant women during their second trimester, according to Medical Xpress. The National Institute of Child Health and Human Development funded the study through its Human Placenta Project, which is a research initiative examining the placenta's role in disease and health.

The new technique allowed the UCLA scientists to differentiate between normal and abnormal function of the placenta — a temporary organ that uses the umbilical cord to join mother to baby. By using the MRI scans to distinguish between the two states, researchers were able to "predict and prevent complications later in pregnancy before symptoms or testing occur" in the study's participants, according to Medical Xpress.

One such placenta-related complication is the correlation between placental size and cardiovascular death. A 2009 Norwegian study published in the American Journal of Epidemiology found a link between abnormally large placenta relative to birth weight and an increased risk of fatal heart disease in adults. On the other hand, a low placental weight has been associated with chronic hypertension and high blood pressure, known as preeclampsia, according to the University of New South Wales' embryology department.

Prenatal testing is vital in detecting complications early in pregnancy. First and second trimester screenings can help determine the possibility of birth defects, as well as other issues affecting the parent-to-be or their unborn child, according to the U.S. Centers for Disease Control and Prevention. But current testing methods can sometimes miss important issues, which makes medical advancements in prenatal care all the more important.

That's because, every year, more than 600 women in the United States die of pregnancy-related causes, while 65,000 women face life-threatening complications, according to the CDC. That number, the public health agency reported, has only increased dramatically over the last 25 years, despite medical advancements. The majority of pregnancy-related deaths are due to heart conditions, but women also die from infections, bleeding, blood clots, and high blood pressure, the CDC reported.

Deaths caused by pregnancy complications are also exacerbated by medical negligence. A nationwide survey of more than 300 postpartum nurses, published last month in MCN: American Journal of Maternal/Child Nursing, discovered that many nurses had poor knowledge of the warning signs associated with pregnancy- and childbirth-related complications, according to ProPublica. To that end, researchers also found that nurses who lacked critical postpartum education would be unable to inform new mothers of certain symptoms that could signal an underlying condition that, when left untreated, could be fatal.

Although the new screening technique developed by the UCLA scientists may not solve the issue of poor education among postpartum professionals, it would at least help predict and prevent any issues that arise during pregnancy. And when doctors are able to treat pregnancy complications before they become severe, parents can focus on enjoying their new little ones after birth.