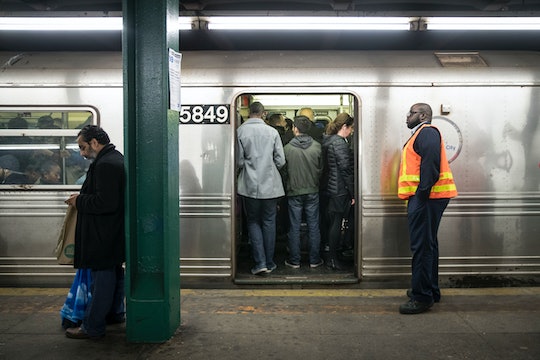 Look, public transportation isn't perfect. As most people know, issues like finding a seat, dealing with other passengers' stinky tupperware from their lunch, and managing to not fall over are all too prevalent. But, in the end, living in large cities like New York City often means you're taking public transportation pretty regularly. And while the metro and subway can certainly be life-savers in some ways, for elderly passengers, those with disabilities, or pregnant women, the ride can oftentimes be a nightmare. But now, the Metropolitan Transportation Authority has thought of a solution: MTA's new "Baby on Board" buttons are great news for parents, and anyone who deserves a seat while taking the bus or subway.

According to The New York Times, the MTA announced that "the buttons will be available as part of a pilot program from Mother’s Day through Labor Day. The authority says the campaign will be 'self-enforced' and not linked to any penalties. A doctor’s note is not required."

Basically, expectant mothers will be able to order a free button from the MTA website, starting today, that they will be able to wear while riding the subway or bus. The buttons will announce to strangers that yes, the person wearing it is pregnant, and that yes, other riders should offer their seat to said pregnant woman.

As all mothers and mothers-to-be can attest to, standing on a moving vehicle while also growing a human being inside of you isn't exactly the most comfortable thing in the world. And while many people may mean well, not that many strangers can be seen offering a pregnant woman their seat on public transportation, unfortunately. Between the constant urge to look at social media while commuting, and not wanting to ask if a woman is pregnant and be wrong, it seems that common courtesy has gone out the window these days.

And that's exactly what the MTA is trying to remedy. In a statement, MTA Interim Executive Director Ronnie Hakim said,

Pregnant riders, seniors and those with disabilities often need seats more than others but their condition may not always be visible. We hope this campaign will help their fellow riders to be more willing to offer them a seat without having to ask a personal question first.

The new buttons which, again, are totally free, allow passengers who need to sit down during their ride the ability to tell other riders just that, without actually having to say anything out loud. Hopefully, women and families who use MTA will now be able to relax a little more on their rides in the Big Apple. And maybe other cities in the United States will start to catch on as well.