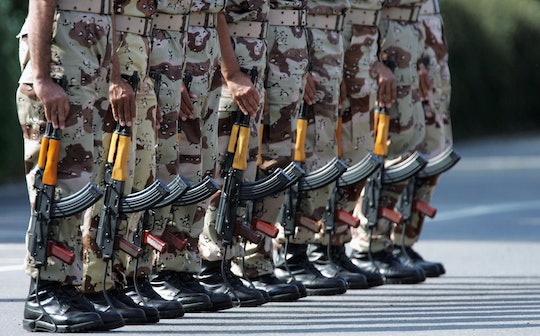 When President Donald Trump tweeted his intent to ban transgender people from serving in the military last month, it was clear that the commander-in-chief has very little respect for the thousands of trans service members who protect the United States every day. But, so many other Americans do, though, therefore the backlash was fierce. And as the Trump administration apparently inches closer to making that assault to progress a reality, there's a push to include them in one of the biggest pop culture moments of the year. CNN reported Thursday that MTV invited trans military members to the VMAs, which will air this Sunday. While it's unclear whether they will attend the annual awards show, it would send a powerful message that the mainstream embraces these patriots and appreciates their service.

The proposed ban on trans service members — which has not yet translated from a series of Trump tweets to actual policy — is a major blow to trans rights and acceptance. But MTV president Christopher McCarthy believes they should be celebrated, as he told CNN while confirming that the network had contacted the Department of Defense about including in these service members — Bloomberg estimates that there are more than 15,000 trans people believed to be currently serving — in the VMAs:

MTV has invited transgender members of the US armed forces to the 2017 Video Music Awards and we would be honored if they could attend. Any patriot who is putting their own life at risk to fight for our freedom and stands for equality is a hero at MTV, and to young people everywhere.

The news that MTV hopes to include trans service members in the VMAs broke on the same day that reports started to surface that the Trump White House is taking steps to actually implement the ban. In a not-yet-sent memo to military leaders described to The Wall Street Journal, the admin reportedly directs the Pentagon to implement the ban in the next six months. The move would prohibit new trans recruits from enlisting, empower U.S. Defense Secretary James Mattis to kick trans service members out of the military, and halt the military coverage of medical costs associated with care related to transitions.

It may seem as though military service members dressed in their uniforms could not be more out of place at an awards show, but it actually makes sense. The VMAs are all about capturing the cultural moment — and creating them, too. Remember Kanye West's now-infamous 2009 ambush of Taylor Swift's acceptance speech? How about when Beyoncé announced her first pregnancy post-performance back in 2011? And the awards show has embraced politics in the past, such as when Lady Gaga protested "Don't Ask, Don't Tell" in 2010 by inviting former service members who left or were discharged because of the anti-gay law to the event with her.

The plight of trans Americans is very much at the forefront of the national consciousness right now. Therefore, the issue has a place at the VMAs.

Still, the service members haven't exactly RSVP'd. Pentagon Spokesman Lt. Col. Paul Haverstick told CNN that the Department of Defense is "reviewing the parameters of the request." After all, there are rules in place that could prevent uniformed service members from engaging in a potentially "partisan political activity" such as the VMAs, according to Vogue.

Whether the service members end up attending the event or not, the fact that they were invited at a time when their future in the military is seriously in question shows that so many Americans see them as people worthy of respect and recognition.