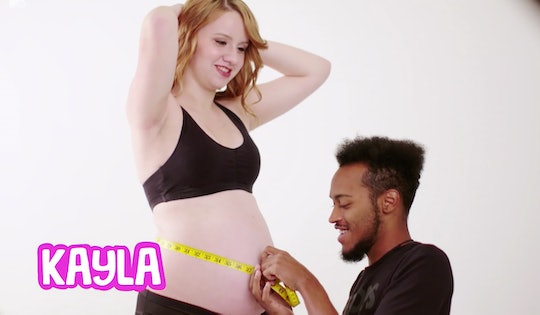 MTV Is Launching A New ‘Teen Mom’ Series, & The Trailer Is Seriously Emotional

It's been nine years since MTV premiered the first season of Teen Mom, the popular spin-off of its teen pregnancy docu-series, 16 & Pregnant. The success of the show has meant that fans can still watch the original lineup of moms as they continue to share the ups and downs of young motherhood with viewers each week, but now the network is about to introduce a new generation of young moms-to-be into the mix. On March 12, MTV is launching a new Teen Mom series called Young and Pregnant, which shares the stories of five young mothers from very different backgrounds as they prepare to give birth for the first time.

The nature of shows like Teen Mom and 16 & Pregnant have meant they've always been controversial — there's a fine line between giving a realistic depiction of teen pregnancy and glorifying it, after all, and the Teen Mom OG and Teen Mom 2 ladies have all pretty much earned semi-celebrity status at this point. But even so, there's nothing even sort of easy about becoming a mom when you're not even an adult yet (or, in the case of Teen Mom OG stars Catelynn and Tyler, giving a baby up for adoption). And while the moms of Teen Mom: Young and Pregnant might be a little bit older (they range in age from 17 to 20), it's safe to say that's still definitely the case.

A preview for the show introduces each of the five moms, along with some details about their lives. At 17, Lexi is the youngest mom of the group, according to Us Weekly, and from the looks of it, the news of her pregnancy hit her otherwise-supportive family hard — her own mom cries as she tells her, "I'm not done being your mom yet," and Lexi is majorly emotional as she talks about her mom in a video diary. Before getting pregnant, Lexi was a popular high school cheerleader, but now that she's expecting a baby with her boyfriend of four years, she's struggling with feeling isolated and judged by her friends as well as by the small town community she's a part of.

Next up is 18-year-old Kayla, who is initially "excited to have a baby with Stephan, her boyfriend of three years," according to Entertainment Weekly, but who eventually starts having doubts about whether or not she should stay in the relationship. As the daughter of a single mom though, Kayla also knows first-hand the difficulty of raising a child on your own, which makes her decision pretty complicated.

Seventeen-year-old Brianna's story is actually the first Teen Mom storyline to feature a transgender partner. Brianna got pregnant during a break with on-again-off-again transgender boyfriend Danae, according to Us Weekly, but after reconciling, Danae decides he wants to help raise the baby. In the trailer, the couple discusses the decision, and Danae tells Brianna, "me being trans, I can show [the baby] that there's so much more to this world."

At 20, Ashley and Jade are the oldest in the group, but that doesn't necessarily make their situations any easier. Former "party girl" Ashley doesn't have a great relationship with her boyfriend Bariki's family, according to Entertainment Weekly, and it leads to some tense moments (in the clip, Ashley threatens to "punch [Bariki's aunt] in the face if she can't watch her mouth"). Jade, on the other hand, worries about her own parents, given that they have had issues with drug use in the past, which has left their relationship seriously strained.

What can viewers expect from the season? MTV isn't giving away too many hints just yet, but judging by the teaser, it looks like there will be plenty of the usual young mom struggles — challenges with family and the relationships with their partners, not to mention the huge (and let's face it, pretty terrifying) learning curve that comes with having a newborn and being massively sleep deprived and overwhelmed.

In other words, the show will continue doing what it's done for nearly a decade now: showing what it's like to have a baby when you're still really young and trying to figure out your life. And it sounds like it will be quite the emotional journey.