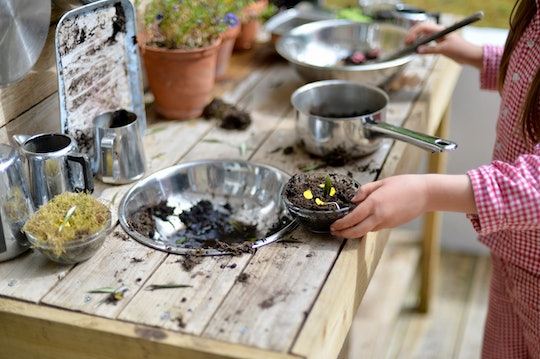 If you’re looking for ideas beyond sprinklers and popsicles to keep your little one busy this summer, then you should know that mud kitchens for kids are all the rage right now. Much like making mud pies, playing in a mud kitchen is strictly an outdoor activity (in case you were worried that your own kitchen might play a role), and they're totally worth the mess.

Mud kitchens aren't necessarily a new concept, of course, but they're regaining popularity as quarantined parents look for fun independent activities for kids. In fact, the hashtag #mudkitchen currently has over 50,000 posts on Instagram. But what exactly makes a mud kitchen? They're basically a combination of a play kitchen, a sand table, and, well, a mud puddle. In other words, a kid's dream come true.

Mud kitchens might sound messy (because they are messy), but don't let that deter you. You'll be outside, and clothes (and bodies) can be washed. Remember, it's actually a good thing for your kid to get dirty.

"The 'hygiene hypothesis' comes from a series of studies showing that kids who are exposed to normal, harmless germs in daily life are less likely to suffer from allergies and asthma," pediatrician David Hill M.D., an author and American Academy of Pediatrics Spokesperson, tells Romper. Overly clean environments can fail to provide the necessary exposure to germs required for a kid's immune system to learn how to defend itself, according to the Food & Drug Administration (FDA)'s website. And their immune system won't be the only thing to benefit from a mud kitchen, as Fatherly reported:

"Mud play encourages mindfulness, builds fine motor skills, and promotes imaginative play, the latter of which is a major component of how kids make sense of their experiences." They also encourage social, emotional, and creative thinking skills, per Scholastic (like when a kid has to search for the right material to use to make a pretend plate or fork, for example).

Just make sure, of course, that the dirt is free of any broken glass or animal droppings, and also be mindful of when the house was built. "In areas that have previously hosted industrial activity or gasoline tanks, lead contamination could be a hazard. Try and find out what was on the land before your house or, if you live in a house built before 1970, consider buying a simple lead test at the hardware store," Dr. Hill tells Romper.

Best of all, a mud kitchen is simple to make. If you have an existing play kitchen that’s collecting dust, haul it outside, put some dirt in the sink, and set your kid up with a hose (or a bucket of water, which might be less soggy for everyone involved).

If you don’t have a play kitchen, or you'd rather not cake yours in mud (understandable), then you can go the DIY route. A make-your-own mud kitchen can be as simple as a patch of dirt and a few old pots and pans and Tupperware containers, or it can be a day-long project requiring 2×4’s and a drill (like this one from Hands On As We Grow). It all depends on how much time and money you want to devote to your mud kitchen, but remember... it's a mud kitchen, so stressing out over whether or not it's fancy enough sort of defeats the purpose.

Whatever your kitchen looks like, make sure it's stocked with fun utensils and tools like measuring cups, whisks, wooden spoons, play food, and maybe even play sugar cones, since toddlers love pretending to eat ice cream. And never eat the chocolate cake your little one makes for you. *Chef's kiss.*