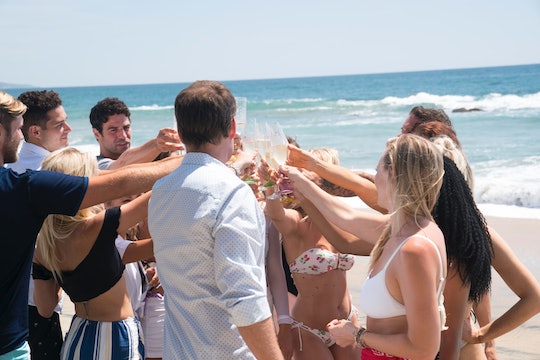 Multiple Couples Just Bailed On 'Bachelor In Paradise' Before The Finale

Monday night's episode went from 0 to 100 real quick when Chris Harrison gave the couples the option to either agree to go to the fantasy suite together, or say goodbye and leave Paradise then. While some couples (like Jordan and Jenna and Kamil and Annaleise) immediately said yes to the suites, some couples actually had a hard time agreeing to it.

First up on the chopping block were John and Olivia. They did not break up, unlike some other pairings; they merely mutually agreed that they didn't want to get engaged at the end of this, but still wanted to hang out. Honestly, if I was on Bachelor in Paradise, that's the route I'd want to take. Paradise is filmed in just a few weeks, which is even a shorter time than a season of Bachelor or Bachelorette. John and Olivia decided they weren't ready to get engaged after a fantasy suite date (presumably where they get it on), and I respect that. Goodbye, Venmo John and Olivia!

Then came the goodbyes for New Zealand Jordan (not to be confused with American Jordan) and Cassandra. Jordan and Cassandra seemed to just arrive individually in Paradise and thus, just start dating, so they decided they were not ready. Same goes for Robby and Shushanna, who decided to leave Paradise amicably as well.

In the aforementioned cases, these couples were pretty much on the same page with not going to the fantasy suite and not proposing. Two Paradise couples, however, had ugly ends on Monday's episode. First was Kendall and Joe, who split even before Chris Harrison offered the out. Kendall didn't believe Joe was being serious about commitment, while Joe thought that he was the one putting himself out there for her — and she wasn't giving anything back. In Joe's mind, he was here for Kendall the whole time while she went on dates with and kissed other people. Joe said during their discussion:

"You don't know how I feel? I'm with you all day long. I've been falling in love with you since day two. I haven't been able to express that to you because all you said is that 'All my boyfriends try to suffocate me and I want to keep things open.' And, of course, I said we can keep things open because that's what you wanted to hear. I haven't kissed or gone on a date with anyone else. And I got pulled for multiple dates and the first thing that comes out of my mouth is your name."

Kendall kept insisting that they were going through the motions of a relationship without the feelings, but Joe said his feelings were real. After Kendall's apparent lack of commitment showed, Joe decided to leave Paradise. Kendall soon followed.

The other break-up was Kevin and Astrid, another couple that was together from the beginning of this season. Astrid admitted in a talking head confessional that she wouldn't say no to a confession, but Kevin wasn't on the same page. He's still hurt from his past on The Bachelorette Canada and Winter Games (he saw his ex-girlfriend Ashley get engaged to boot), and he didn't feel like in the right place emotionally to go to the fantasy suite again. Astrid was crushed, and left Paradise. Seeing as tomorrow is the Bachelor in Paradise finale, I suspect even more tears to follow — but probably some real proposals, too.