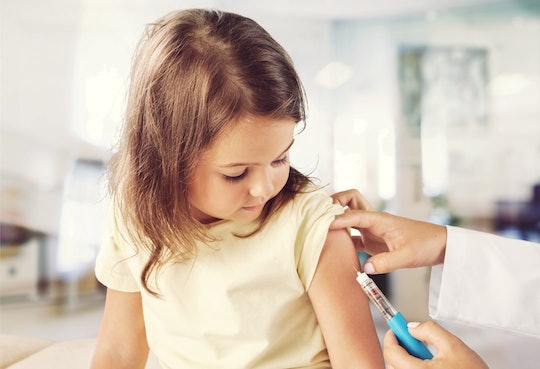 Mumps Is Making A Comeback, But Not For The Reasons You Might Think

Over and over, scientific research has proven that vaccination is vital in preventing potentially life-threatening illnesses. But a conglomerate of factors, including the swelling anti-vax movement, has caused a resurgence of long dormant diseases. In fact, it turns out mumps is now making a comeback, even among people who've been vaccinated against the condition, according to the New York Times.

As of Oct. 1, forty-seven states and the District of Columbia reported more than 4,660 cases of mumps infections this year, according to the U.S. Centers for Disease Control and Prevention. That's nearly four times the number of total cases reported in 2015, CDC data shows. And, so far, six states have seen more than 300 people infected with mumps: New York, Missouri, Texas, Washington, Hawaii, and Arkansas, where the most recent outbreak occurred.

So what's going on? According to the New York Times, immunity from the two-dose mumps vaccine can wane over time, which may be why the country is seeing an increase in cases. But most mumps outbreaks are happening among one group of people: 18- to 22-year-old college students. In New York, for example, the number of students infected with mumps continues to grow at Syracuse University, the Post-Standard reported.

Why are college campuses hotbeds for mumps infection? Because of the way the disease is transmitted. According to the CDC, you can pass on mumps through saliva and mucus, so the disease can be spread through sneezing, coughing, sharing cups, close contact, eating, exercising, and all those other activities college students do. And it's around college-age when immunity from mumps-measles-rubella (MMR) vaccine, which is 88 percent effective, can begin to wane in some people. Although two doses can protect against mumps, a third dose is recommended for people at highest risk of contracting the disease — like students at the University of Iowa, which had a mumps outbreak in 2015 and 2016, according to the New York Times.

Of course, anti-vaxxers have used the possibility of waning immunity as so-called evidence that the MMR vaccine doesn't work. But that's not actually the case, the New York Times noted. Immunity against mumps may fade in some people, which means that most people who've been vaccinated are protected from the disease. As Dr. Patricia Quinlisk, the Iowa Department of Public Health's medical director and state epidemiologist, told the Times,

We’ve heard some people say this proves the vaccine’s not working, but the vaccine probably prevented a lot more students from getting ill.

And in cases where immunity may have waned, the Times pointed out, the MMR vaccine still reduces a person's risk of serious — even life-threatening — complications. According to the Mayo Clinic, mumps infection can lead to meningitis, deafness, or inflammation of the testicles, ovaries, or brain. Doctors had been particularly concerned about preventing inflammation of the testicles, a condition known as orchitis that affects 20 to 30 percent of men infected by mumps. Protecting men against orchitis had become a critical rationale for mumps vaccination, the New York Times reported.

Another important thing to remember: the MMR vaccine had not eradicated mumps the way it had measles. Mumps infections happen every year, according to the CDC. In 2006, a surge in mumps infections occurred, reaching more than 6,500 cases that year; 2016 saw similar numbers, CDC data shows. But those years are exceptions, because infection rates tend to hover at or below 1,000 cases each year, generally.

Mumps may be making a comeback, but that's less of a failure of the vaccine, and more of a need for better health practices. The MMR vaccine is still the most effective protection against mumps, measles, and rubella. But when you have a bunch of college students swapping spit in a variety of ways, without a second thought, it's not hard to see why a contagious disease could spread.