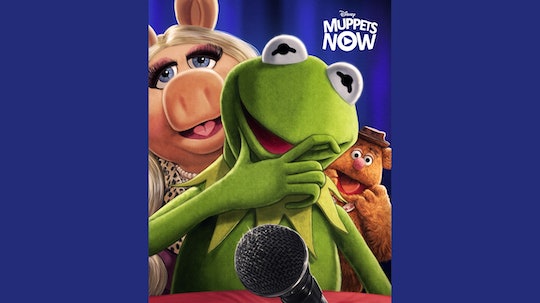 Kermit, Miss Piggy, and the rest of the muppets gang have joined forces once again in Muppets Now on Disney+. The "unscripted" original series premiered on Disney+ on July 31, so you can officially introduce your little ones to this iconic crew in a brand new setting.

In Muppets Now, the six-episode series follows lovable muppets like Fozzy Bear, Miss Piggy, and, yes, even the Swedish Chef try to come up with original sketches for a new streaming series under a strict deadline (how meta). Each episode, which come in at under 30 minutes, will feature a handful of sketches and a variety of segments, but they're not always the same. So if you're a fan of these classic Jim Henson character and sketch variety shows, then you will probably love Muppets Now. What's more, celebrities like Aubrey Plaza and Seth Rogen will also make appearances.

"Overflowing with spontaneous lunacy, surprising guest stars and more frogs, pigs, bears (and whatevers) than legally allowed, the Muppets cut loose in Muppets Now with the kind of startling silliness and chaotic fun that made them famous," Disney+'s description of the series reads. "From zany experiments with Dr. Bunsen Honeydew and Beaker to lifestyle tips from the fabulous Miss Piggy, each episode is packed with hilarious segments, hosted by the Muppets showcasing what the Muppets do best."

Muppets Now is rated PG and, according to CNN, it's packed with plenty of family-friendly content even the younger audiences will enjoy. Indeed, you can expect to see interview segments, science experiments, cooking breaks, and plenty of jokes. Just watch how the muppets expertly handle a Zoom call during the quarantine...

The first episode is currently available to stream on Disney+, with the other five episodes releasing on Disney+ weekly on the following Fridays. After these first six episodes, Disney and the Muppets Studio are hoping Muppets Now will be the start of future projects to come, according to The New York Times. "We definitely have ambitions for the Muppets to be doing more," Leigh Slaughter, vice president of the Muppets Studio, told The New York Times. "But there's nothing we're ready to reveal at this point."

So if you're in need of a good laugh, check out the first episode of Muppets Now is now available to stream on Disney+.

More Like This
Sarah Jessica Parker Brought Her 13-Year-Old Twins To See ‘Hocus Pocus 2’
Scott Calvin Is Ready To Retire In The Santa Clauses Series Coming To Disney+
You Can Stay At A ‘Hocus Pocus’ House On Airbnb — And It’s In Salem!
'The Proud Family: Louder & Prouder' Is Returning For Season 2 On Disney+