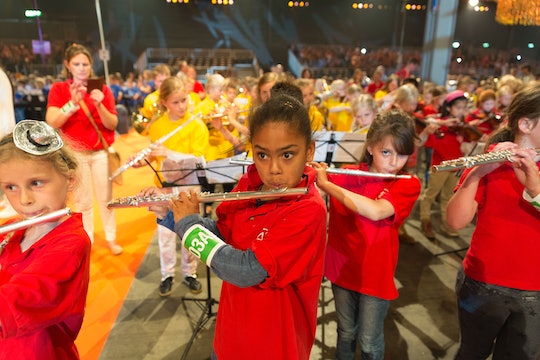 With arts funding cut to the bone in many, if not most, school systems, it should come as no surprise that scientists and other questioners of existence are looking more closely at the links between what schools offer, what they don't, and how it impacts young minds long-term. A new study just released says what many North American parents have theorized: Music students do better in school than kids who don’t study an instrument, and researchers think they have the reason why.

As Science Daily reported, high school students in Canada who also happened to be taking music classes performed much better in tests in core subjects like math, science, and English than cohorts who had not taken up an instrument. The new findings, originally published in the Journal of Educational Psychology, a publication of the American Psychological Association, smartly aimed to examine the current status quo, in which public school systems both in the U.S. and its Northern neighbor, needing to look for what to cut, often use music education as a go-to in order to eliminate salaries and additional expenses. The idea being, at least the school can still afford to focus on academics... which go first, right?

"Our research proved this belief wrong and found the more the students engage with music, the better they do in those [core] subjects," explained University of British Columbia education professor Peter Gouzouasis, the study's lead author.

"The students who learned to play a musical instrument in elementary and continued playing in high school not only score significantly higher, but were about one academic year ahead of their non-music peers with regard to their English, mathematics and science skills... regardless of their socioeconomic background, ethnicity, prior learning in mathematics and English, and gender," the professor added.

This is pretty big news to a parent like me, with multiple kids and the need to prioritize the family budget. Without a consistent music education at any of the public schools my kids have attended, I've tried music lessons at parks, with students teachers... anything I can to have my kids learn an instrument, which is, TBH, a pretty grueling task.

Clearly, though, the discipline of mastering that guitar — or cello, or violin... — does something to the brain.

According to the study, researchers who poured over school records for more than more than 112,000 students in British Columbia, noted that kids who started music in first grade and had participated in at least one music course, from band, to piano, orchestra, concert choir or vocals, had higher achievement overall than those who did not.

Students who were "highly engaged" in music, meanwhile, had higher test numbers in all subjects, with the results "more pronounced" when kids studied an instrument rather than just vocals..

"Learning to play a musical instrument and playing in an ensemble is very demanding," study's co-author Martin Guhn, an assistant professor in UBC's school of population and public health, told the University of British Columbia website.

"A student has to learn to read music notation, develop eye-hand-mind coordination... develop team skills... All those learning experiences, and more, play a role in enhancing the learner's cognitive capacities, executive functions, motivation to learn in school, and self-efficacy."

Researchers noted the high cost for learners when resources for music education are unavailable, given the strength of the findings. "The irony is that music education — multiple years of high-quality instrumental learning and playing in a band or orchestra or singing in a choir at an advanced level — can be the very thing that improves all-around academic achievement," noted Gouzouasis.

I'm so with these guys, but what's the answer? Programs like VH1's Save the Music are around and they do great things. That program, together with Las Vegas band Imagine Dragons, donated $40,000 to local school music education in 2017. But that's a far cry from a national overhaul in how we look at education, and what we believe good schooling for our future citizens is worth.