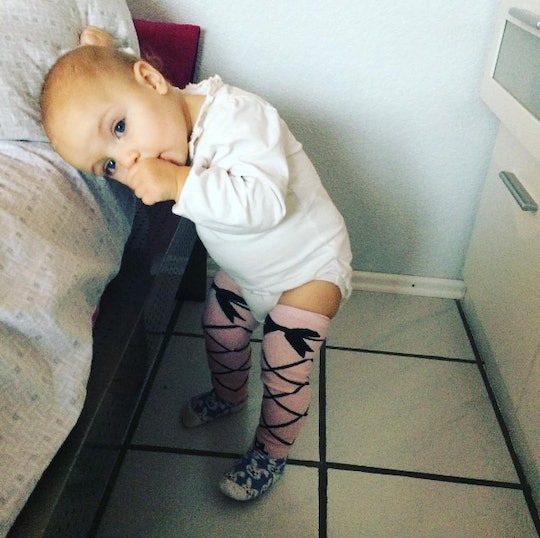 I Don't Care That My Daughter Sucks Her Thumb

My daughter was a thumbsucker right from the start. In her 12-week ultrasound photo, there she was in the profile shot, the thumb in her mouth perfectly visible. I was fascinated by her ability to suck her thumb in the womb, and it ended up being my favorite in utero photo of her.

Once she left the womb, my daughter didn't find her thumb again until she was about 2 months old. Once she did, however, there was no going back. Her pacifier was clearly inferior. The thumb was the way to go.

Since then, my daughter sucks her thumb almost constantly: when she’s drifting off to sleep, when she’s upset and looking for comfort, when she's cuddling me or her father, when she’s hungry, and even when she’s just walking around the house or playing with her toys, as content as can be.

When my daughter was about 3 months old, I noticed that she must have been sucking her thumb quite vigorously, because she had a tiny red spot on her right thumb. Concerned, I tried to pull her thumb out and distract her with toys. But within a few days, the red spot was gone.

After that, I stopped regulating my daughter's thumb-sucking habit. I just figured that she'd stop on her own time, whenever she felt she was ready. That's why I'm not worried about her sucking her thumb.

My daughter's doctor was the first person outside of our family to comment on her thumb-sucking habit. At her 4-month checkup, he noticed her thumb in her mouth and offered his advice.

“You have no need to worry about that, by the way,” he said, referring to the thumb-sucking. “Kids usually stop on their own before it can do any damage to their teeth.” He was preaching to the choir, as I already found the habit endearing. Several friends and strangers had told me that they found it cute, calling her a "baby doll" and "adorable." But his reassurance did make me feel a bit better.

"She’s still sucking that thumb, I see," my mother has said more than a few times, her voice carrying the slightest hint of judgment.

Yet I still feel like there is somehow shame attached to having a child who sucks her thumb. At the very least, there's a great deal of pressure to make sure it doesn’t get out of control when she gets older, even though it's unlikely that will be the case, as most children tend to stop sucking their thumbs between the ages of 2 and 4.

"She’s still sucking that thumb, I see," my mother has said more than a few times, her voice carrying the slightest hint of judgment, suggesting that perhaps I need to nip the habit in the bud.

“It’s cute now, but it’s terrible later when she doesn’t want to break the habit," someone in the grocery store line once told me — and that person was a total stranger.

While I don't see my 1-year-old daughter's thumb-sucking habit as a problem right now, let's say that it becomes an issue later in her life. Let’s say she doesn’t naturally stop by the time she goes to school, or by the time her permanent teeth come in when she's around 6, which is when she could develop issues with teeth alignment. Why should I worry about all of that now? And why should I assume it’s going to be a problem in the future?

I don’t want to shame my daughter at such an early age, or make her feel like she’s doing something wrong. Instead, my goal is to eventually identify why she might still be sucking her thumb and get to the root of the issue. I want to refrain from trying to modify her behavior without her understanding what’s going on, especially at such an early age. If anything, I suspect that punishing her for sucking her thumb will make her want to suck her thumb even more.

My daughter is currently about 15 months old. I still treat her thumb-sucking as a non-issue, because I trust her ability to grow into a well-adjusted child — whether she sucks her thumb or not.