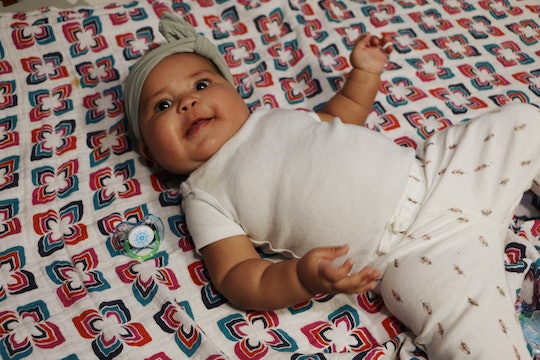 My Baby Was Fat-Shamed By Our Doctor

There we were, my husband and I, sitting in the waiting room with our baby girl. We were waiting for the pediatrician to call us into her office for our two-month appointment. I knew that today's visit would likely involve my daughter receiving her standard 2-month shots to protect her against things like diphtheria, tetanus, and hepatitis B, and I was anxious at the thought of anything painful happening to her. Little did I know that I was the one who would go for an intense emotional roller coaster ride that day.

When we were called in, I sat down and started answering all of her questions: Is she doing a good job controlling her head? Is she sleeping through the night? On her back? (Yes, yes, and yes.) Then the doctor took a second glance at her chart.

“Hmmm. Her weight is in the 94th percentile and so is her height,” she said. “How much is she eating?”

I was a bit puzzled by the question. During our last appointment, the doctor had been so happy with our baby’s weight gain. But now, apparently, she was questioning it. “She’s eating about 5oz. bottles every two to three hours,” I said. “She has a healthy appetite.”

“Well, I think that we really need to keep an eye on this,” the doctor said brusquely. “How about we cut back to 4oz. per feeding?”

“You want me to put our baby on a diet?” I squealed incredulously. I couldn't believe it: At just 2 months old, our daughter had been fat-shamed by her pediatrician.

The truth was, my husband and I knew that our daughter was a little bit on the chubby side. We'd dealt with the complete opposite while raising her older brother, who was always on the skinny side as a little boy. (He still complains about always being at the front of the line in class, because he's a wee bit smaller than the rest of the boys.) But I'd seen so many chubby babies in my lifetime that I never imagined it could be considered a health issue, especially since most babies lose weight pretty much as soon as they start moving. For some reason, however, our 24-inch-long and 14.5-pound baby was causing alarm.

When I found out that I was pregnant with a baby girl, I made a promise to myself that she would never inherit my body image issues. I wanted her to know that she was beautiful, no matter what. So she would hear nothing but body-positive messages from me.

To a degree, I understood why our pediatrician was concerned. Our daughter was gaining a bit more than the average baby her age, which is about five to seven ounces per week and an inch a month. I briefly wondered if something was wrong with her health, because I know that rapid weight gain at a young age could lead to obesity later in life. Within an instant, however, I was back in defensive, mama bear mode.

It was the way the doctor handled the criticism that bothered me most. She acted as if we were doing something wrong by purposefully over-feeding her, even though all the risks of having an overweight child, such as a delay in hitting milestones like crawling, were not things we were concerned about at that point. Our daughter was just too young.

The same words were being thrown around that I had heard all my life: Diet. Weight loss. Cutting back.

The pediatrician’s comments were particularly alarming because I had struggled to get down to my ideal weight my entire life. I've always dealt with body image issues, which I typically tried to mitigate through constant dieting, working out until I couldn't stand, and even a short bout with bulimia. I remember staring into the mirror and hating the way I looked, as well as the numbers on the scale. When I found out that I was pregnant with a baby girl, I made a promise to myself that she would never inherit my body image issues. I wanted her to know that she was beautiful, no matter what. So she would hear nothing but body-positive messages from me.

But then here we were. At only 2 months old, my daughter was being body-shamed, and the same words were being thrown around that I had heard all my life: Diet. Weight loss. Cutting back. All of these words swirled in my mind, and I just couldn’t believe that our doctor was suggesting there was something wrong with her weight when she was at such a young age.

"I don't understand," I snapped. "You suggested increasing her formula during our last visit because she didn't seem satisfied. Now you want us to cut back?"

"Let's just keep an eye on her," the doctor suggested, trying to calm me down.

I had no issues with my pediatrician prior to this conversation, but I was furious with her. I didn't think it was right for her to make us worry when she didn't seem to have a clear idea of what we should be worried about. So I took to my friends, as most moms do in these instances. Everyone told me that if their child was on the chubby side, their doctor responded with nothing but encouraging comments about loving their little healthy, chubby babies.

"As if worrying about nursing and sleep schedules wasn't enough, now I was worried I about my 'obese' baby."

That said, my friend Audra, who is a mother of two, told me that she too had her son fat-shamed by his pediatrician. “When my son was a baby he was off the charts for height and weight and head circumference," she said. "His pediatrician told me that I needed to be cautious when feeding him so that he didn't grow up to be obese."

Audra said her doctor's comments terrified her. "As if worrying about nursing and sleep schedules wasn't enough, now I was worried I about my 'obese' baby," she said. (She added that her son is quite active and far from obese.)

I also learned that parents are also dealing with comments aimed at children who weigh in at the lower end of the charts. “Both of my daughters were small at birth and continue to be in the low weight percentile. My doctors feel the need to make comments and tell me that if I don't do something about it they will be forced to do something," my friend Megan, also a mom of two, said. "My girls have eaten 24/7 since birth. They are just very tall and skinny. It's absolutely ridiculous to assume that I am starving my children."

In the end, I came to the only resolution I could: to stop f**king worrying about my daughter's weight. My husband and I had a beautiful, healthy baby girl. If there proved to be a problem with her weight as she got older, then we would handle it then.

That day, I admittedly did come home and try cutting back an ounce of formula during her next feeding. My daughter cried for more food because she was hungry, and there was no way in hell that I was going to let her be hungry. I ended up being even more angry at myself for following the doctor's advice than I was at the doctor.

As a parent, sometimes you need to hold your ground in the face of other people's advice and know within your gut that you are doing the right thing for your child. I think in this instance, I succeeded in doing that. And when my daughter has her 4-month appointment, I won't allow myself to be taken off-guard by any snarky comments. I’ll know just what to say from the perspective of both an informed parent and a concerned mother.