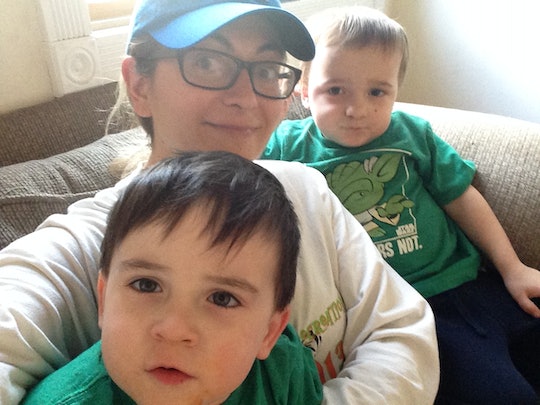 I should just start this off by saying that I am absolutely terrified of spiders. Most people have a healthy fear of the spindly legged monsters roaming our planet, but it's safe to say my fear of arachnids is so severe a psychologist would probably classify it as a full-blown phobia. I'm always on alert for spiders and now that my twins are 3 years old and can form mostly intelligible sentences, they've become part of my spider detection squad. (Yes, I am working on a logo for matching t-shirts, because it's going to be awesome.) One of the great things about 3 year olds is that they're short and close to the ground, so they're typically the first to spot a spider scurrying across the floor and can alert me to its presence. Three year olds are also brutally honest, which is bad when you're in public and they spot a rogue chin hair you forgot to pluck, but great when you want to know which kid is responsible for the pee puddle in the hallway. Because of this, I figured my toddlers would never, ever lie to me. I was wrong.

This is the first week it's been warm enough to play outside without bundling up, and this afternoon the boys and I went to enjoy the nice weather on our back deck. I was sitting on the deck with my back against the railing while the kids rode their tricycles in semi-circles (it's a small deck). One of the wheels snagged a corner of our outdoor rug and it flipped up to reveal an eight-legged spawn of Satan the size of my palm.

I snatched up the kids and ran inside, my heart thudding in my chest from terror. The kids were understandably upset that I had dragged them inside without explanation or warning, so I pointed out the striped stalker on the porch and the three of us watched him through the glass window in a silent stand off.

Ignoring everything I've read about kids and personal boundaries and when it is or isn't appropriate to let your kids see you naked, I tore off my t-shirt and bra. The boys were still shouting about the spider being on me and I was positive that I felt something on my back, so I threw myself on the couch cushions and tried to rub the invader off my body.

My pulse had just settled down when Lolo shouted, "Mommy, Mommy there's a spider!" I calmly said, "It's OK honey, there's glass, it can't get us." And then all the hairs on my body stood up as he pointed at me and said, "No, Mommy! ON YOUR BACK!" I screamed and tried to whirl around and see for myself crying, "Where, WHERE?" Remy started shouting too: "There! Right there on your back!"

Ignoring everything I've read about kids and personal boundaries and when it is or isn't appropriate to let your kids see you naked, I tore off my t-shirt and bra. The boys were still shouting about the spider being on me and I was positive that I felt something on my back, so I threw myself on the couch cushions and tried to rub the invader off my body.

By this point my hair had fallen out of its messy bun, so I couldn't tell if the tickling sensation I felt was the spider or my hair. Still topless, I screamed at the boys, "Stay away from Mommy's shirt! Danger! Danger!" and ran through the house to the bathroom to make sure that I wasn't giving a spider a piggyback ride. When the only thing I saw on my back was my usual collection of moles (side note, I have got to call the dermatologist), I dashed upstairs to grab my sneakers, boobs still a-bouncing.

My kids are climbers (which is a polite way of saying they're terrors) and they have a habit of turning into Cirque Du Soleil tissue dancers whenever they see drapes or curtains, so our windows are currently bare and covered in tiny fingerprints. Because I live in a townhouse and the neighbors on either side of me are retirees, I was positive that any minute now the doorbell would ring, because they would likely assume all the screaming meant I was being murdered. However, they probably couldn't hear me, because our lawn maintenance crew was outside loudly mowing the grass and trimming all the hedges.

They kept up the innocent act by pointing to my shirt and saying, "Spider!" but they spent the rest of the afternoon tearing off their own shirts and running around yelling, "Ah, spider, SAVE ME!" while laughing hysterically, so I'm pretty sure they knew exactly what they were doing.

But just because my neighbors couldn't hear me didn't mean the grounds crew couldn't see me. When I managed to look up while dashing through the house half naked gathering my spider-killing supplies, I realized there was an awful lot of attention being paid to the bushes outside my deck.

As embarrassed as I was to be giving a free peep show, I was more concerned with protecting the boys from becoming Spiderman, so I ignored the possibly Peeping Toms congregating on the lawn and turned my attention to my bra and my inside out T-shirt, both still on the ground where I had tossed them. The boys swore no spider had come out of the clothing, and therefore I thought I had the invader cornered. I stomped on the shirt (I swear I heard a catcall from outside) and worked up the courage to shake it out — but no spider fell out.

Puzzled and still a tiny bit afraid that I was dealing with a ninja spider who was about to launch a sneak attack on my face, I turned my shirt right side out and realized why I hadn't found the dead spider. It was my Halloween 5k shirt, complete with a silkscreened spider on the back.

Completely mortified, I turned to utter some choice words to the grounds crew, but they had already dispersed and were getting back in their trucks.

I showed my shirt to the kids (after putting my bra back on) and explained to them that it wasn't a real spider, only a picture of a spider. They kept up the innocent act by pointing to my shirt and saying, "Spider!" but they spent the rest of the afternoon tearing off their own shirts and running around yelling, "Ah, spider, SAVE ME!" while laughing hysterically, so I'm pretty sure they knew exactly what they were doing.

So yes, I spent my day giving a free show to the condo grounds crew and learning the very hard lesson that you should never trust a preschooler. But on the bright side, my hedges have never looked better.

Since Spidergate, I've explained to my kids the importance of telling the truth, and told them that Mommy is only afraid of spiders that move. They now scream, "SPIDER!" whenever they see an ant in the house, but that's progress in my book, since they too must die. As for the yard crew, they've only been back once since and to their credit, they had the decency not to stare as I ran the stroller past them as fast as possible. I'll continue to work with the kids on the difference between truth and lies, as well as why they shouldn't hang on curtains because this weekend shopping for new drapes is at the top of my to-do list.