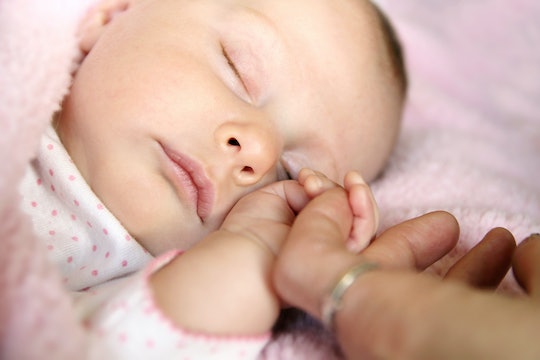 Like all parents-to-be, my wife and I had been warned many times over that sleep loss just came with the territory when it came to babies. We weren’t really expecting our infant to be the magical exception to the rule, and so we tried to prepare ourselves to join the hoards of sleepless, exhausted parents comparing horror stories about babies who insisted on being awake. And for the first few weeks, we were exhausted beyond belief. I couldn’t believe what waking up every two to three hours to breastfeed did to my body and mind, and no amount of cat naps during the day seemed to make me feel human again. When he started sleeping through the night — with no prompting or coaching from us, but entirely on his own — we were so surprised that at first we were worried. But after our midwife and our doctor assured us that he was fine, we let him sleep, and wondered if our good fortune would last. Getting a decent night of sleep made me feel like a more capable parent, and a more capable person. But all of that changed when he hit the four-month mark, and I was forced to learn the true meaning of the term “4-month-old baby sleep regression.”

When our son first started sleeping through the night, I told myself that it was just a fluke, and it couldn’t possibly last. My midwife reminded me that babies grow, develop, and change extremely quickly and what was normal one day might not be normal the next. So when we did talk about his nighttime sleep habits, we always qualified it. “Oh,” I would say, as casually as I could manage, “this is weird, but he’s actually kind of sleeping through the night right now.” I didn’t allow myself to form the sentence “he’s sleeping through the night already” because that implied permanence. I actually went so far as to become oddly superstitious about it. I mostly wouldn’t discuss it with other parents of young kids because they were all so tired, and it just seemed mean. But when I confessed (and it did feel like a confession!) to one friend that I was getting a solid eight hours of snooze a night, she said “don’t tell anyone, or the universe will punish you for bragging and he’ll stop sleeping!”

I took her words to heart. I kept it to myself. I was terrified to tempt fate.

Suddenly, we were those parents we’d heard about, the ones staring absentmindedly out the window at 4 in the morning after being up for two horrendous hours, wondering what was real. I wanted to believe that it was a fluke, I wanted desperately to imagine that things could go “back to normal” in a day or even a week. Instead, they only got worse.

But despite my best efforts, all of that sleep lulled me into a false sense of security. As the weeks ticked by, I stopped savoring every decent night of sleep, stopped constantly thinking “tonight could be the night that it all ends!” Eventually, boldly, my wife and I even started to stay up a little after the baby went to bed. I think we did start to believe that we had somehow created one of those mythical “good sleepers.” And then one night, just like Cinderella’s carriage turning back into a pumpkin, something in our little angel changed, and instead of peacefully sleeping, he was wide awake and screaming like the devil.

The first night, he woke up once. My wife and I were shocked and confused. What was this bizarre thing that was happening at one in the morning and why were we suddenly awake? But I fed him, and his panicked cries subsided, and we all went back to sleep. But the second night, the second night our beautiful child woke up three separate times, and each waking was uglier than the last. Suddenly, we were those parents we’d heard about, the ones staring absentmindedly out the window at 4 in the morning after being up for two horrendous hours, wondering what was real. I wanted to believe that it was a fluke, I wanted desperately to imagine that things could go “back to normal” in a day or even a week. Instead, they only got worse.

It was impossible to know what the best move to make as a parent, and that was basically hell for me.

At first, I was confused and had no idea what could possibly be going on. Then, in desperation, I did my research. After searching a variety of “four month old baby won’t sleep” type combinations, I quickly learned that our situation wasn’t terribly uncommon. As it turns out, around 4 months old, babies' sleep patterns change for good. In essence, their ability to fall asleep and stay asleep, which was previously running on autopilot in the newborn stage, becomes more like that of an adult or an older child. As a result, lots and lots of babies go through a sleep regression at this time. They’re not really regressing, exactly, because it’s a sign they’re developing normally, but from the outside their sleep patterns can go from easy and structured to erratic and impossible. And it sucks, it sucks a whole lot, for everyone involved.

He started to struggle, not only with staying asleep, but also with falling asleep in the first place. Previously, he had seemed to have this magical ability to fall asleep to, and sleep through, almost anything. But when the sleep regression hit, that all went out the window, and suddenly his sleep became this fragile and elusive thing. It seemed like anything could keep him awake, and the worst part was, we often couldn’t tell what was keeping him up. Sometimes, even the things that kept him awake seemed contradictory. He definitely wasn’t going to fall asleep if he was alone, but if we moved or breathed loudly or otherwise showed any signs of life, that might keep him up too. To make matters worse, though we tried to cater to his changing needs, we weren’t exactly able to offer the most quiet and restful environment imaginable. We were in-between places to live, staying with some friends, just doing the best we could to keep our heads above water.

All of that took its toll. We were all — my wife, my kid, and me — exhausted and crabby most of the time. I felt like a bad mom because I couldn’t crack the sleep code and find the magical combination of things that would help him drift off and stay asleep more easily. I felt like a bad person because the whole thing stressed me out so much and I wasn’t able to maintain a zen like “this too shall pass” attitude about the whole thing. And then I felt even worse because my own exhaustion made caring for him during the day harder than usual. Instead of offering him enriching and unique experiences in his precious early days, I was keeping him fed, clean and dry, but pretty much phoning it in otherwise.

I wanted to be the kind of parent who showed compassion for her child when he was going through something difficult. That didn’t make it easy, and it was still incredibly difficult, but it did make it livable.

I found myself breaking down more or less daily. I was caught in a loop of exhaustion and frustration, and I found all of the advice available for navigating the sleep regression to be woefully inadequate. I worried constantly that if we changed his bedtime routine, we might create new “sleep crutches” and make sleep harder for him down the line, but I also worried that if we kept things the same none of us would ever get any sleep. It was impossible to know what the best move to make as a parent, and that was basically hell for me. And all of that anxiety was compounded by the fact that I have suffered from on-and-off insomnia as far back as I can remember, and passing on my terrible sleep to my child is something I just do not want to do.

I’m sure that it’s very different for every family, and different for every baby, but in our particular case, the only thing that worked was throwing out all the advice. Ultimately, I had to decide that getting all three of us as much sleep as possible took priority over doing things perfectly or avoiding future problems. I decided that above all else, I wanted to be the kind of parent who showed compassion for her child when he was going through something difficult. That didn’t make it easy, and it was still incredibly difficult, but it did make it livable. It made it possible to stop torturing myself. My wife and I made the decision to bring the baby into bed with us full-time, which meant that even if we were waking up six times a night, we weren’t getting up six times a night. He still struggled, but within days, I could see a difference. He was more relaxed at bedtime, and that was enough for me to know we were on the right track.

I wish I could remember when the sleep regression “ended” and things really got easier, but all I know is it took way longer than I'd ever expected. I was too tired to really pick up on the shift in his behavior, and the shift was gradual anyways. He didn’t go back to sleeping through the night — that joyous adventure was over (at least for awhile!) — but he did gradually wake in the night less, and stay awake for shorter periods. He went back to his usual happy-go-lucky self, and I once again became a mom who could more or less function most days. If there’s a lesson to learn here, it’s that you can’t actually hold onto the good times with babies, and when the tough times come, you just do whatever you have to in order to survive. It isn’t particularly pretty or noble, but I guess it’s one of those parenting badges of honor we all earn.

More Like This
Here's When Your Baby Might Start Sleeping Through The Night For Real
Should You Be Giving Your Toddler Melatonin To Help Them Sleep?
These 4 Sleeping Positions Will Keep You Comfortable After A C-Section
Baby Not Napping At Day Care? These Reasons May Be Why