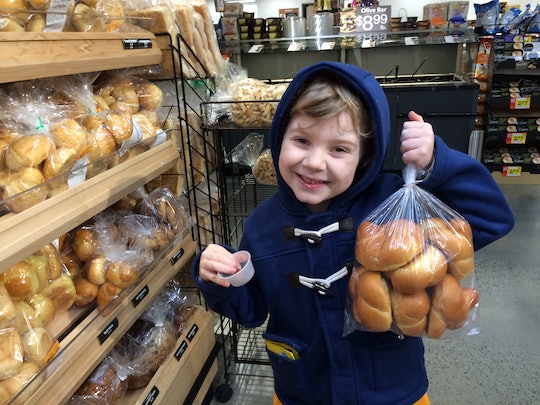 My 5 Year Old Planned Thanksgiving Dinner, & This Is What Happened

For me, the holidays are definitely about making new family traditions and enjoying each other's company. Kids seem to have boundless excitement when it comes to special days and I can't get enough of it. I'm always looking for ways to get my kids involved in the celebration, from carving pumpkins to carving turkeys. (All of our traditions do not involve sharp implements, although we also recently spent a few hours cutting out snowflakes from coffee filters, so maybe they do...)

When my 5-year-old son showed a great interest in the food aspect of Thanksgiving (and who can blame him?), I thought it would be fun to let him plan, shop for, and help prepare a feast for our family. I figured: he's going to be one of the guests actually eating in the meal, so why not let him lend a hand for all the prep work? Beyond that, I was interested to see what a 5 year old would come with. What would he think would be a Thanksgiving mealtime must-have? Which dishes would he skip? And did he know how much chopping was involved?

My 5 year old was definitely excited about Thanksgiving, and eager at the prospect of taking such an important role in getting things ready. I was thrilled because it meant less work for me (albeit more supervision), and I was floored that he was so proud to partake in a such a big way. So I figured, why not?

I decided to let my son plan Thanksgiving dinner. Everything from the decor to the main course would be under his direction. What would we eat? How would the food be prepared? How would he decorate?

Step One: The Decor

Now that my son is in kindergarten, we have no shortage of artwork to display. He proudly picked a few pages of Thanksgiving-themed works he'd created to be displayed prominently in our dining room art gallery.

At the grocery store, we browsed the many floral arrangements. He went straight for the fall colors and happily plunked a bouquet into our cart. (Bonus points because the bouquet he picked was actually beautiful!) At home, he set the table, taking great care to fold the paper napkins into the neatest triangles he could manage. He was taking all of his duties very seriously, and it was adorable to watch.

My son had this great idea: We would somehow carve out the inside of an apple, peel an orange, and stick the orange into the apple. The idea was that everyone would be so surprised when we cut into the apple and see — gasp! — it wasn't an apple at all, but an appange. Or an orple.

Perhaps this task isn't impossible, but I'm certainly not the one to engineer it. When I realized I couldn't carve out the inside of an apple and keep the skin in tact, he was happy enough with a tray of apple and orange slices, which he helped to expertly arrange. (Phew.) I thought the dish was adorable, and I was thrilled he'd picked something so healthy and colorful to kick off our meal. So much of Thanksgiving is filled with rich, decadent foods we all love (and love to eat), but I liked that we'd have something a little bit lighter to begin with.

Oh, and as for the orple? It was by far my 2-year-old daughter's favorite part of the meal.

So when we were planning the menu and I asked him what he wanted the main course to be, he replied, "Turkey, of course!" (Smart kid!) But there was only one issue: I've never cooked a turkey. I suggested we get a rotisserie chicken from the grocery store instead. He was a little disappointed, but once he had his drumstick, he was fine with it. (And I was thankful that I didn't have to spend all day basting a mammoth turkey and worrying if I was doing it right.)

As for sides, he went traditional. He wanted corn and mashed potatoes. If I'm being honest, he wanted corn on the cob, but that's pretty difficult to find this time of year, so he settled for canned corn with the stipulation that we still be allowed to butter on it. I mean, of course, Thanksgiving isn't Thanksgiving without as much butter as you want. I was amazed at how easy-going he was through every phase of this process. We couldn't have a turkey, but he was fine with the chicken; we couldn't get corn on the cob, and he was just as happy with canned corn. It gave me perspective: if there was something that went wrong with an aspect of the meal, why do I stress so much over it when I can easily replace it with something just as delicious? He didn't know it, but I'll be using this tactic going forward!

I was (maybe not so) secretly ecstatic that he chose mashed potatoes, too. That's my favorite comfort food on the planet, and I knew he'd enjoy mashing them. Plus butter. Mashed potatoes are basically a vehicle for butter.

My son loves bread. (As one should.) Whenever we go to the store, that's what he asks for: "good bread." Give the child a crusty loaf or a baguette and some butter (notice a theme here?), and he's in heaven. At the store, he browsed the bakery section thoughtfully. When he spotted these beautifully knotted, egg-washed rolls, he knew that's what he wanted.

At dinner, he hardly touched the other foods he'd been so excited about just hours before. He'd prepared this whole feast and he pretty much stuck with bread and butter for his meal. I mean, the rolls were good, and he had fun breaking it apart and scooping out the soft white middle, and spreading butter on it, so I really can't complain. It was awesome to see him so proud of himself and so thoroughly enjoying the meal he'd prepared.

I really love baking, so when I asked my son about dessert choices, I was hoping to make a pie or cupcakes or cookies. But he immediately knew what kind of dessert he wanted: popsicles. I wasn't exactly let down by his choice — after all, this was his show! — but I was interested to see how a popsicle would work after our delicious dinner.

Our last stop at the grocery store was the freezer aisle. Again, he was so thoughtful and serious, taking in all the choices. He finally went with the red, white, and blue popsicles I associate with Memorial Day and the Fourth of July. He was very pleased, and wanted the dessert to be a surprise for everyone.

How Did It Go?

To be totally honest, I loved doing this with my son. It's just the beginning of the season of family togetherness, and I can totally see this becoming a tradition. He wanted to invite my dad to the feast, and when my dad arrived, I could see how proud my son was, showing off all of his genius ideas. His happiness was infectious!

We all "oohed" and "aahed" over his traditional choices and his unexpected dessert. We ended the evening with some Thanksgiving-themed Mad Libs. He was in absolute heaven. All in all, it was perfect — popsicles included.

When I first took on this experiment, I really thought my son was going to choose all of his favorite foods. I thought for sure we'd be eating pasta with pesto, fruit cups with maraschino cherries, and jello. But he was so serious about combining the foods he loved with Thanksgiving traditions. I was so happy to spend the day with him preparing for the feast. And watching him introduce each dish with so much pride really made me smile.