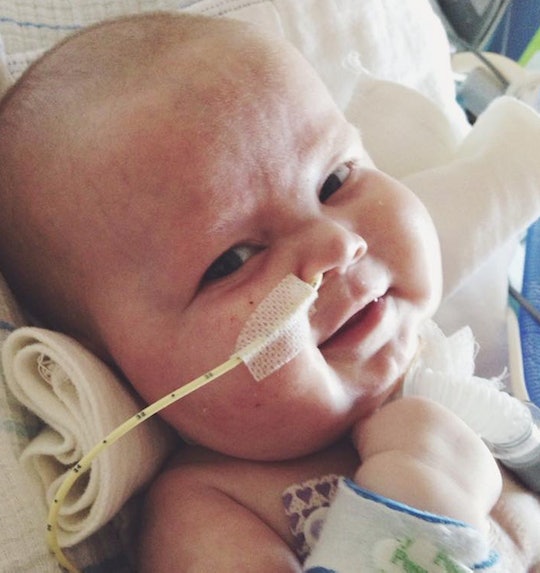 Before my son was born, I read all the baby books. I prepped myself on sleep methods, on breastfeeding, on health and toys, and everything in between. Every book I could find, I devoured, because I was determined to be the best possible mother for my babies. After I had my first son, I thought I had motherhood down pat. Anything I could be hit with, I was prepared for. But no books, no education, no experience — nothing could have prepared me for my second son, Charlie. He was born after a quick labor. Three hours from start to finish and he was in my arms. Looking back, maybe that was a sign of what was to come. Everything Charlie did, he did fast. He was cramming everything he could into as little time as possible. That was my boy.

There were no warning signs prior to his birth. I delivered what I thought would be an entirely healthy baby, but right after he was born and placed into my arms, I suddenly understood that there was something extra special about this boy. His purple skin tone gave it away, and when a medical team rushed to swarm around him like bees watching their hive fall, I knew. He'd been diagnosed with a severe congenital heart defect, Total Anomalous Pulmonary Venous Return, and a second disease called Pulmonary Hypertension. My son's death changed my life entirely.

But Charlie was a boy who was so much more than his sicknesses. His smiles beamed from ear to ear at the first hint of my face. As he grew and watched his mobile spin round, he kicked as if his legs would make him fly up to the ceiling to reach his favorite spinning lion, elephant, and giraffe. When I held him in my arms, he nuzzled straight up to my neck, and slept as though he’d never slept before. The rise and fall of his steady breathing will forever be seared into my memory; I never saw him more at peace than when he was as close to my heart as possible. And when he made people fall in love with him, it wasn’t halfway, especially for me. I gave him everything, just as a mother does. For good. Forever.

According to Cincinnati's Children, a Total Anomalous Pulmonary Venous Return is a rare congenital malformation in which all four pulmonary veins don’t connect to the left atrium of the heart in the normal way. Instead, they drain into the right upper chamber of the heart. Pulmonary Hypertension, according to the Mayo Clinic, is a kind of high blood pressure affecting the arteries in your lungs and the right side of your heart, making it really difficult for blood to flow through your heart. Charlie had both.

Charlie’s congenital heart defect was nearly impossible to detect on ultrasound because the pulmonary veins lie behind the heart, and cannot be seen. After his birth, the answers rolled in, followed closely by more questions. I didn’t sit for 200 days, listening to alarms beep at all hours, watching monitors, and learning every possible term and dosage — anything to be a present mother for my boy. Each day I held my breath. I clenched my fists. I made him swear to never leave my side. But after 200 days, he did, and I made the most difficult decision of my life: I told him it was OK to go. The words left my lips, but it was mostly a lie. It would never be OK.

I held him for seven hours after life left him. I couldn’t bear to let him go.

I held him for seven hours after life left him. I couldn’t bear to let him go. The nurses, doctors, and therapists who came to love him entered into that dark room and took turns kissing his face and saying goodbye to the little boy that consumed them day after day for six and half months. The funeral director picked him up directly from my arms, promising he would take care of him for me.

After leaving the hospital, I went home to our tiny apartment, and instead of greeting the family waiting inside for me, I made a beeline to the shower. In the quiet, I let the hot steam fill the room, the water hitting my skin as the sobs racked my body. I sat on the shower floor for an hour, immovable, stunned. That night, after the whole house went to sleep, I laid on the living room carpet and cried out with every single question. Why? How? What the hell? How do I carry on? How do I do this? How could his precious life be confined to only six months and 17 days?

I'd resigned to the fact that was my fate, but I swore to myself every day in that hospital room that if anything happened to Charlie, I owed it to him to take his brother and leave. And a few months after his death, I did.

That night was my ledge. I fell asleep in the darkness, and I awoke to the sun peeking through the curtains, the soft rays of light warming my skin. That’s the day I chose to reach out and grab for them. Tiny patches of light in total darkness. I knew if I wanted to survive, I had to find them and not let them go.

Sickness tried as it could to steal my son’s whole life, all six months and 17 days of it. It was a lot to ask of a little boy to keep breathing and keep holding on when he was already trying with all he had. His sicknesses invaded his lungs, his little veins, and riddled his body, but it didn’t steal him. Even when it led to death, it did not have the final say. Because, for Charlie, and for me, our love lives on long. It’s a bond that never breaks, a cord stretched across worlds, through time, and without end. As long as my heart beats, I know my Charlie will be loved. As long as there is breath in my lungs, his name will be spoken. His story will be told. Love will call out from my heart to his, and it will spill on all those around.

Charlie came into my life for a moment, and that moment changed the entire course of my existence. My four year-long marriage had been a period of intense verbal and emotional abuse. I thought I was forever trapped. I'd resigned to the fact that was my fate, but I swore to myself every day in that hospital room that if anything happened to Charlie, I owed it to him to take his brother and leave. And a few months after his death, I did. I found courage that I never had before. I found value in myself I never knew. I found strength, inspired by the strength and bravery I saw in my little boy.

On the days where I feel like no good can be found, I hunt for the good Charlie brought and still brings me. I search for the light.

My son gave everything he had with every bit of strength within him, and in doing so, he taught me how to fight for my own life. To love in the face of fear. To take chances and risks and not look back. He left me, and the pain is there. It will never leave. The ache is there. There’s a space in my arms that he is supposed to fill. It’ll always be empty. But Charlie left me with so much more than just sadness. He left me stronger, braver, kinder, fiercer, and with more love than I realized my heart could hold.

No books, no education, and no amount of experience could ever have prepared me for losing my own child. The pain is unbearable, but just as every mother gives all of herself to her child, I’ve learned to do the same, even though he’s not here to hold and touch and giggle and laugh and learn. But I focus on the love between us, and on the days where I feel like no good can be found, I hunt for the good Charlie brought and still brings me. I search for the light. My memory could never erase him. Not the pain of his absence nor the joy of his presence. And I survive by clinging to both, because they remind me that I am alive.

This little boy took my life by storm, and left me, 200 days later, still catching my breath. Charlie taught me more in 200 days about love than the sum of all teachers before him. And for the rest of my life, he has my heart.