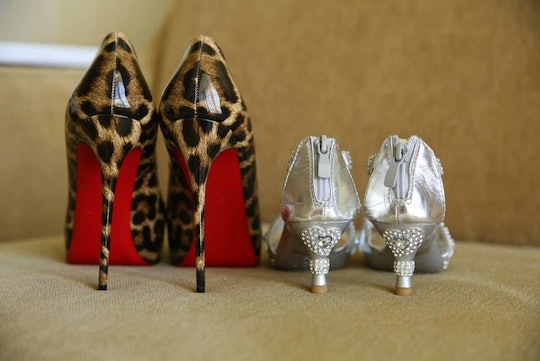 The first time I got married, my parents walked me down the aisle and gave me away. That wedding was bursting with every tradition in the book: flower girls, bridal party, first dance, garter toss, and all of the other odds and ends that stand the test of time. My marriage however, did not have the same longevity. My daughter, Ava, was about 2 when her dad and I separated after being together for 18 years. Following a rough divorce, I never thought I would remarry, but when my daughter was 6, I found myself planning my second round of nuptials, this time as a mother.

My divorce left me broken. My confidence was shot, my mojo gone. But I had to be strong for my daughter, the product of my failed marriage. She was always the center of my world, but now she was my only focus, so as much for her as myself, I poured everything I had into her happiness and well-adjustment. We became a little unit and soon acclimated to our new life together. Part of me even found solace in the thought of being single for the rest of my life, Ava and I mirroring a less dysfunctional version of the mother-daughter duo from Grey Gardens.

Change can be daunting and confusing, and my way of tempering that was to make her feel like a participant, not an observer during the planning process.

My friends were the driving force behind my reentry into the dating world and I begrudgingly obliged. Truthfully, I shuddered at the thought of another man seeing me naked and became exhausted just thinking about shaving my legs regularly and flirting. Last time I dated, I was in college; Tinder and social media didn’t exist. I felt like a Golden Girl in a sea of younger, hipper, eligible women. Plus, I had more than myself to consider since my social life now impacted my child. But I did it. I logged onto Match.com and got completely overwhelmed and nauseous.

Two days in, I met Jason, the man I would marry two years later. Jason made an effort to get to know me as a woman and as a mother, never flinched at any complicated post-divorce, custody logistics that came my way, and fell into our family with ease. When we showed Ava the video my parents took of him proposing to me in the backyard of the home we would all be moving into together in just a few weeks, she grinned ear-to-ear. Squealed, actually. She was equal parts excited that we were getting married and that his two dogs were part of the deal. My heart burst at her little semi-toothless smile and the dimples that only emerged when she smiled so hard you could feel her excitement.

We knew we wanted an intimate wedding and that Ava would play a pivotal part, because although I was the bride, this marriage was going to change the dynamic of her little life, too. Change can be daunting and confusing, and my way of tempering that was to make her feel like a participant, not an observer during the planning process. But I didn’t realize initially how many hats she would wear. Before I knew it, she became my maid of honor, dress consultant, music guru, and overall wedding planning sidekick. She came with me to pick out my gown and to every fitting thereafter. We talked about song possibilities, and she made the final decision on the song she and I would walk down the aisle to.

The night before the wedding, the two of us stayed in a beautiful hotel suite. When she walked in, her eyes widened as she took in every detail of the room, all the while squealing and clapping. It was like our last hoorah as a duo. When I asked her what she wanted to do that night, she responded with, “Can we just get room service and stay here together – you and me?” And that’s exactly what we did. To her, the food being wheeled in with fancy silver covers was the perfect night. We ate in our pajamas and snuggled in bed watching cartoons. It was a stark difference from bachelorette shenanigans with girlfriends before my first wedding, but a million times better.

Dating after divorce and remarrying as a mother can be inherently complicated, but above all my mission was to have this day and all of its intricacies be just as much Ava’s as it was mine and Jason’s.

We both woke up giddy the next morning and I’m not sure if it was pending excitement from the wedding or that fact that we ordered room service again for breakfast. (Probably both.) We spent the day getting pampered and prepped, and she made sure to give very specific instructions on how she wanted her hair and nails.

As we headed down to the ceremony, she looked up at me and said, “Mommy I’m so excited that I’m shivering. I have butterflies and I feel like I’m going to pee my pants.” I’ve never related to a statement more in my life than in that moment. (And I’ve also never been more relieved that potty training was way in the past.) She looked down at her jewelry, admiring her selections with pride. I giggled thinking about how she picked out a little silver emerald shaped ring to mirror my emerald cut stone. She’s always been purposeful in even the smallest decisions, and it’s one of the things I love most about how her little mind works.

I decided to forgo the tradition of my parents walking me down the aisle and opted for her to be the one to give me away. I can still see her tiny little pedicured toes sticking out of the fancy shoes she chose, as we stood hand-in-hand ready to make our entrance to Journey’s, “Don’t Stop Believin’” (a song that we belt in the car regularly, and the perfect one to play on the metaphor of believing in second chances). In that moment I knew I made the right decision to give her that responsibility. It was a life-changing moment for both of us, and including her in the ceremony in this way symbolized our taking this step into this relationship as a team; as partners.

During the ceremony, Ava stood with Jason and me as the Rabbi asked her some very important questions: Did she promise to keep her room clean? To always love and listen to us? To take care of her new step-siblings (the dogs)? She nodded her little head emphatically, smiling.

We all sat together as a family for dinner at the reception, surrounded by our guests, I couldn’t help but look around while I had a bit of an out-of-body experience. Both of our families surrounded us, and it felt like a bonafide dinner party. Our guests socialized with one another, enjoying the company, food, and wine. There was no awkwardness about the simplicity at all; no questions about formalities or speeches to be given; no hurt feelings. Everyone just understood that this evening was about the three of us, not any mainstream traditions, and they embraced it. My parents may not have walked me down the aisle, but they sat front and center and beamed with pride watching their daughter and only granddaughter take those steps toward a new life, and I still shared many special moments with them during the night.

Dating after divorce and remarrying as a mother can be inherently complicated, but above all my mission was to have this day and all of its intricacies be just as much Ava’s as it was mine and Jason’s. Even now, four-plus years later, she talks about the excitement of that day and what it meant to have such a big role. I know how much it meant to have her little voice heard throughout the process, even though she talks about the waterslides at the hotel pool more than anything else.