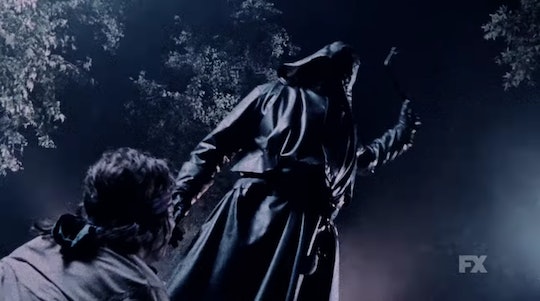 It turns out the counselors of American Horror Story: 1984 don't just have to worry about the two serial killers roaming Camp Redwood. There are even more traps awaiting them, as the trailer for Episode 3 reveals. Someone gets stuck at the bottom of a spike-lined pit, which spells near-certain doom for them. But their identity remains concealed, leaving fans to craft a theory about who dies in the spike pit on AHS: 1984. And why there are deadly booby traps at a summer camp at all.

In the promo for Episode 3, Xavier (Cody Fern) and Trevor (Matthew Morrison) peer down in the spike pit with less concern than you'd think people would have in that situation. Xavier casually asks what someone is doing down there and a quavering voice responds, "I'm dying!"

Reddit user babysadcore theorized that Ray (DeRon Horton) was the person trapped down there. But based on several other promos, it seems like he might not be — or, at the very least, he might not be the only person caught at the bottom of the trap. It seems like he might have been joined by Chet (Gus Kenworthy), though the interaction with Xavier and Trevor has me suspecting a potential third victim, too.

In the "Slashdance" promo, Ray and Chet are running through the trees together when they both fall — presumably into the spike pit. That is seemingly confirmed in the "Season 9: Still To Come" official preview. Though there are quite a few shots hastily cut together — most so fast that it's hard to figure out what's happening — Ray can quite clearly be seen in the bottom of the pit while Mr. Jingles (John Carroll Lynch) stands above, pouring gasoline down below. However, Ray is also shown dragging himself out of a trench and running away; if it's the same one, then he might escape unscathed.

Chet, however, may not be as lucky. In the same preview, he's shown with a spike protruding through his left shoulder. If both he and Ray ended up falling into the pit, then it looks like Chet was the unluckier of the two. It might be his voice you hear in the scene with Xavier and Trevor. However, it doesn't really sound like Chet. To my admittedly inexpert ear, it sounds a lot more like Jonas (Lou Taylor Pucci), the former counselor-turned-ghost who's been getting repeatedly murdered at the camp.

That may be a stretch, but bear with me: Xavier might be more cavalier about someone who isn't his friend being stuck in a trap. And considering the promos appear to reveal quite a lot about who gets in and out of the pit, a third victim would be an added in-episode surprise. Perhaps both Ray and Chet get free (the latter injured, of course) while Jonas perishes, only to return as his ghostly nature dictates.

What's more concerning about who ends up in the huge spike pit is why there's a huge spike pit at all. Reddit user Mrs_chainfrog speculated that Margaret Booth (Leslie Grossman) set up traps to catch Mr. Jingles, because she's intent on killing him before he kills her. It would fit with Margaret's questionable logic, at least.

It's almost confirmed that Ray and Chet are the ones who find themselves in the spike pit, but there's still a chance they're not alone down there.