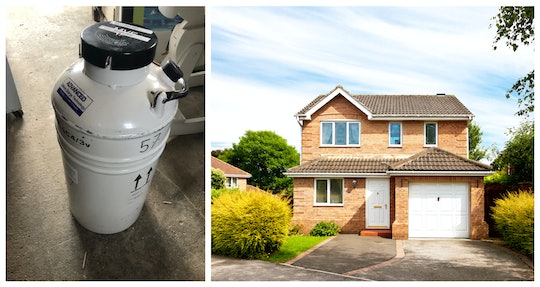 I was in third or fourth grade when I came home from school, temporarily traumatized by a description someone with a nefarious older sibling had delivered to me about where babies come from. Upon rushing home, pale-faced and horrified, my mother met me with a colorfully illustrated children’s book on bodies, sex, and how babies are made. It, of course, took me several years to realize that heterosexual intercourse that takes place during a few specific days of the month and includes viable sperm, robust eggs, and a primed uterus is just one of so many ways babies can be made.

Growing up, everyone around me in rural West Virginia made it seem like conception was a simple and easy concept. I’m pretty sure that I thought if I so much as touched sperm it could somehow jump inside my body and impregnate me. Several things have changed since then, aside from my level of sex education. Now I sit here beside my wife, scrolling the dozens of anonymous donors we’ve meticulously narrowed down our search to on the Cryo Bank’s website we’ve painstakingly vetted. I’m on day three of Clomid, and we’re about to dive into round two of at-home insemination.

A few months ago when we began to have more serious conversations about growing our family, I convinced my wife to have sperm delivered to our home for the first few tries. I don’t have an aversion to hospitals, but something about that sterile room, those stirrups, and the syringe full of sperm sounded the “last resort!” alarm in my head. Being at home with my wife with some Norah Jones, a few Bath & Body Works candles, and donor #8675309 just felt more intimate and sexy. I picked out lingerie. We cleared our schedule for the entire weekend I was supposed to ovulate. We didn’t tell anyone. The secret was part of the intimacy.

That Friday afternoon, I received a text message from Fed-Ex that I had to sign for our “package.” In a frenzied panic, my wife left the house to go to a coffee shop. She was so nervous she said she couldn’t be there when it came, so I hovered by the front door until I saw the truck pull up. Our usual delivery guy (he knows us — we’re lesbians and we shop a lot) sauntered up to our front porch empty-handed.

“I have a really heavy package,” he said looking a little fatigued. “Is there somewhere I can leave it for you so that you don’t have to pick it up?”

Just put my giant tank of sperm over there sir. Very subtle.

Picturing the small vial of sperm on ice I was planning on receiving, I skeptically opened the garage door for him.

Our Fed-Ex guy popped out of his truck carrying a massive pyramid-shaped case that weight at least half as much as he did. Manhattan CryoBank was slapped on every side of it. Just put my giant tank of sperm over there sir. Very subtle. My wife came home to find me standing beside the case, watching it like I was waiting for a jack-in-the-box to pop out. We both puzzled over this mysterious package, asking the same questions. How does it open? How long do we have once it opens? Why is it so big? How do we get the sperm out? We poked around, flipping the shipping tag back and forth, hoping some kind of written directions would magically appear. I think we imagined something like a small travel thermos, packaged inside of a box, maybe with a manual curled inside. The closest thing we got was a label cautioning us that the package contained liquid nitrogen.

All preconceived notions of mood music and my newest lace panties were abandoned and replaced by the stark reality that we needed safety glasses and gloves. Five minutes later, with regular prescription glasses, a pair of gardening gloves, and a bandana tied around her face for good measure, my wife opened the latch and lifted the tank out of the case. Tendrils of liquid nitrogen slinked out of the tank and swirled around my wife in her flannel shirt and basketball shorts. She looked like Bill Nye the Science Guy if he found himself needing to perform a dangerous experiment while stuck in Dukes of Hazzard.

Like two children who finally uncovered how a Russian doll actually works, we discovered the vial of sperm hiding inside the tube.

Still donning her gardening gloves, she lifted out a long test tube and questioned me about whether it could be the sperm. I told her it had been a while since I’d actually seen sperm in person, but I didn’t think one shot of sperm needed that big of a tube. Finally, like two children who finally uncovered how a Russian doll actually works, we discovered the vial of sperm hiding inside the tube. To truncate the story: we thought the sperm would come with a syringe and we were wrong. After a failed trip to the pharmacy and another makeshift solution, we managed to get the job done.

I didn’t get pregnant. There’s a high chance we completely screwed up the entire process. Norah Jones did not sing to me. I wasn’t adorned in delicate black lace, and we forgot to light a single candle. But I laughed until I cried, and after we fumbled through it my wife held me, and it was intimate.

This time we have our own syringe, a real pair of gloves, and I don’t care who sees the sperm delivery. After a few rounds, we might end up in that doctor’s office, my feet in the cold stirrups. And that’s okay too.

Because this is how babies are made.

More Like This
Infertility As A Stepmom Means Double The Alienation, But So Much Love
These Stepmother's Day Instagram Captions Are Straight From The Heart
Stepmom Quotes & Sayings For Every Occasion
My Nanny Showed Me How To Be A Mother