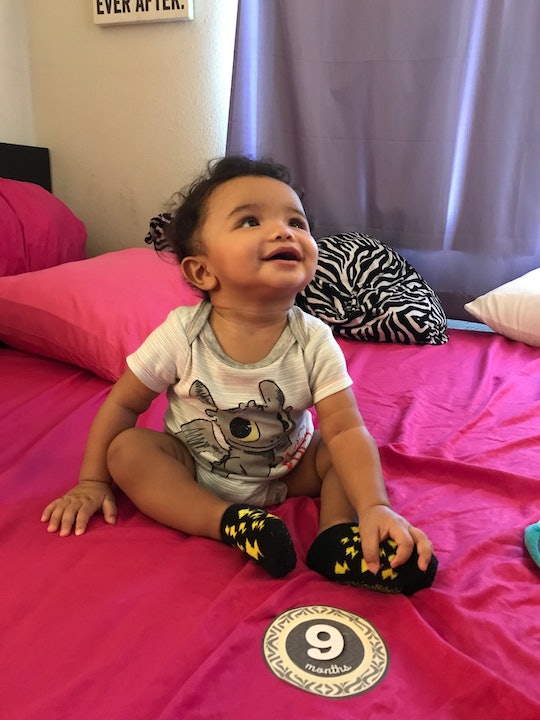 My Baby Got Hurt (& I Still Haven't Forgiven Myself)

We are playing on the bed with our 9-month-old son. It's not terribly rambunctious, more of a winding-down. Kisses and cuddles, and Kai laying his head on me as if he's about to go to sleep. Our other kids have gone to bed, and it's just me and my husband enjoying some baby time together. There is a pillow on the end of the bed, and we are both stationed around him, feeling like it's a king-size bed and we have done this with all our kids so it is fine. That's when my baby lunges toward the pillow at the end of the bed and disappears over.

"Braymon!" I yell at my husband. He doesn't catch my son before he hits the ground, but has him in the split second after. A scream peals out of Kai. Oh god, is he OK? We go from bliss to that alternate zone of panic, where everything has suddenly fallen apart and you're staring at the fears you normally keep tucked away: what if I can't keep my baby safe? Here, in this moment, is concrete proof you can't.

One fall is all it takes to shatter your sense of control, to feel like you've undone everything good you ever did for your kids.

I have four kids, so I'm no rookie to this. I am aware that babies fall off beds pretty often — my kids know the song about it. It happened to me once, with my oldest daughter, Anneka. As our bed wasn't too high up and we had carpeting, she wasn't injured, but it was enough to shock me out of my complacency and not let baby Kai near the end of the bed.

Kai gets around very well. He crawls, but also does a crawl/scoot thing where he drags one leg, and puts up the other in crawling position. It gets him around the floor pretty quickly, but also on the bed. He also jumps. Kai, in a second, can propel himself forward to get at something he wants, whether it's one of his toys, the remote or one of our cell phones.

I leap up and grab him from his father. In the moment, I am not thinking of anything other than "is he hurt?" I check his head for bumps, bruises, dents, anything and everything. I check his hands, his wrists, his arms, his legs. I check to make sure nothing was hurting. I hope that the crying is just out of shock, and not because he's hurt.

Whether it's your first, fourth or seventeenth child, when your baby gets hurt, it's traumatic.

His sisters Anneka, Mia, and Laila run into the room after hearing him cry to see what happened. I am too upset to explain it to them, rocking the baby and trying to shush him. Anneka reminds me to sing to him to calm him down, which I do often. She sings "You Are My Sunshine" with me, both of us fighting back tears.

Whether it's your first, fourth or seventeenth child, when your baby gets hurt, it's traumatic. Poor Mia, who is 8, is very sensitive and started crying. Anneka grabbed my phone and asked if she should call 911. It was, you know, panic stations.

If you've been here, you know that your hopes of sleeping that night are shot. Even if your kid is fine, you know that you let them get hurt, and worry that they will suddenly develop terrifying symptoms, manifestations of your hopelessness as a mom. I hold him for a while before putting him down into his crib. In the morning, there are still no bumps or bruises, but my guilt lingers for days.

One fall is all it takes to shatter your sense of control, to feel like you've undone everything good you ever did for your kids. Experiments have shown that young babies have a poor sense of depth perception, which means that Kai may not have been able to realize that the bed had a drop-off at the end of it. So it's on me, but accidents happen.

It takes a lot of work to convince yourself that you're doing the best you can when something like this happens, and to realize that parenting is a learning process. That each near-miss is an opportunity to avoid something worse happening, to re-right the boat and do better next time. We talk a lot about kindness with our kids, but rarely in relation to ourselves. Our idea of a "good mom" hinges on a flawless performance of parenting, a complete absence of mistakes or doubt. But a good mom, in my opinion, is a mom who makes mistakes and does everything in her power to keep them from happening again. A good mom is a mom who was there, even if something unfortunate happened. We all need to go easier on ourselves when it comes to this parenting game.

I beat myself up so much about Kai's fall, you'd think I'd done him permanent damage. But in the end, the only person without lingering scars was Kai.