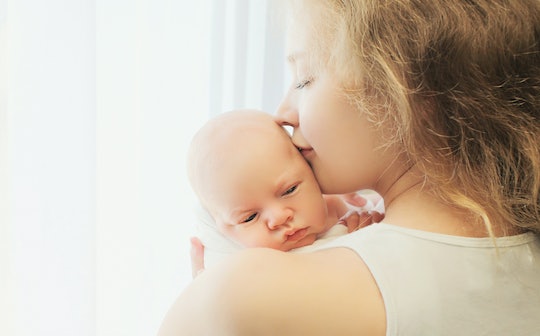 My Baby Had Colic & It's Affected Her Health Forever

My second daughter had colic from pretty much the moment she was born, and to this day, I wonder if we handled it correctly. I swear I knew something was wrong with my daughter the second the midwife lifted her to my chest. She was crying, of course, because newborns cry, but it felt different to me than your typical newborn cry. It sounded like something was wrong, like she was in pain. I have a very clear vision in my head of her being held up in the air as they passed her to me, screaming her head off, and me getting this slight twinge in my gut, that deep place where intuition lives, and it felt like a dark foreshadowing of what was about to come. But in that moment, there was no way for me to know whether or not my baby had colic.

Immediately after I breastfed her for the first time, she projectile vomited across the room. It felt like it was instantaneous, like she swallowed and instantly everything in her stomach just flew out, like in a bad horror movie. I knew right then that my intuition had been correct and that something was wrong. We were in the hospital for a total of two days, during which my daughter never stopped spitting up. Each and every time I fed her, up the feeding came instantly.

At a loss for anything else to do, I agreed, feeling sick to my stomach about what we were doing.

One of the nurses, trying to be kind, suggested that perhaps she merely had some mucus left in her stomach and that was causing her to spit up. She offered to suction our baby's stomach out to see if it would help. By that point, she was already well over 24 hours and in my gut, I felt like mucus was not the problem. Because she was a day old already, I thought that surely whatever mucus had been in there would have been absorbed by now, not to mention her spit up was not mucus-y at all. On top of that, she wasn't showing any signs that she had mucus in her body. She didn't gag. I'd been a nurse for two years at this point and felt fairly sure it was not the mucus, but my husband insisted we give suctioning a try — just to see if it helped. At a loss for anything else to do, I agreed, feeling sick to my stomach about what we were doing. I felt like every part of me was crying out, "Don't do it!!" but still, I let them take my baby way and shove a hard plastic tube down her throat to suction out her entire stomach. I just wanted to help.

Needless to say, the suctioning didn't help. In fact, it only seemed to make things much worse. Instead of just puking, she now screamed non-stop. Nothing I did could soothe her and she continued to spit up every time I fed her. The only thing that seemed to soothe her somewhat was when my husband held her on her belly in the breastfeeding football hold in his arms. Only then did she stop the crying and look out at the world with curious, slightly suspicious eyes.

The pediatrician told me that my daughter had a giant, deep gash all along the back of her throat, extending the entire length from the roof her mouth down to her esophagus.

Once we got home, things continued to be pretty rough. My husband was a brand-new teacher and felt too scared to take any time extra off, so he literally took only a day off and then went right back to work. Looking back, we recognize this was probably bad for all of us, but at the time, we were 24 years old and had already faced two layoffs, so we were terrified of him losing his job. We did what we thought we had to do.

I took my daughter in for her first check-up and discovered, much to my horror, that my instinct not to get her suctioned had been right all along. After examining her, the pediatrician told me that my daughter had a giant, deep gash all along the back of her throat, extending the entire length from the roof her mouth down to her esophagus. So not only did the suctioning not help my poor baby, but she had been in constant, terrible pain since the procedure and I had absolutely no idea. I felt terrible and beat myself up for not following my gut in the first place. If I had, we would've avoided unnecessary pain for my baby. But here we were, with a baby in pain, an exhausted mother of a newborn and a 2 year old, and no idea what to do. Although I let the doctor know that she was crying a lot and spitting up,she continued to gain enough weight that our pediatrician wasn't concerned.

It was obvious that my baby was feeling pain and that feeding, even when she was starving, made it somehow worse. It got to the point that she would push away from me immediately after she was done eating, like she knew what was coming and was already dreading it.

So I resigned myself to a screaming, barfing baby. I took to constantly carrying burp cloths and receiving blankets around, whipping them out in front of me with practiced speed to catch the inevitable spit up that would fly out of her mouth the second she was done feeding. At night, my husband and I would take laps around the house with her, and he'd stumble into work the next day with spit-up stains on his shoulders while his co-workers chuckled at his "daddy badge."

One of the hardest parts about the experience was that I felt like such a failure as a mother. It was obvious that my baby was feeling pain and that feeding, even when she was starving, made it somehow worse. It got to the point that she would push away from me immediately after she was done eating, like she knew what was coming and was already dreading it. I felt like I couldn't do the one thing mothers are supposed to: soothe my own baby. I cried all of the time and sank into a depression. I hated when my mom and husband told me that the baby could sense my stress and that was making her cry even more, because really, that only made me feel worse.

I felt like I couldn't do the one thing mothers are supposed to: soothe my own baby.

The one bright side of all of this was that my husband and daughter forged an incredible bond from all those late-night laps, one that still lasts to this day. She's the biggest daddy's girl of all my daughters, and I love seeing the special bond they have together. I also eventually was able to help ease the spitting up somewhat by experimenting with my diet. I soon learned that even a whiff of caffeine made her miserable and that she had a special intolerance to fruit. In my effort to lose the baby weight, I'd been gorging on fruit like raspberries and strawberries and discovered, much to my dismay, that seeded fruit especially can cause a lot of gas in babies with sensitive stomachs. So out went all fruit, dairy, chocolate, and caffeine, which definitely helped ease the severity of spitting up, even though it never really stopped.

Eventually, my daughter seemed to grow out of her colic, but around the age of 4, she started complaining about stomach aches. A whole host of testing and GI specialists later, and we came to the diagnosis of acid reflux. Acid reflux can be caused by different things, but essentially, it's when somehow, for some reason acid from the stomach flows back through the esophagus, where it most definitely does not belong. The very first question the GI doctor asked me, actually, was if my daughter had had bad colic as a baby. I just looked at him, flabbergasted, and said, "How did you know?!" But apparently, it's just science. He explained that acid reflux usually manifests itself in babies as a colic, in kids, as stomach pain, and then later, as adolescents and adults, through classic heartburn symptoms. I felt somewhat relieved to know what we were dealing with, especially after learning that acid reflux runs in my husband's family, but I also felt completely frustrated.

Knowing what I know now, I wonder if we would've treated it sooner, or if it would have made a difference. Our only option now is to put her on medication for life. To me, that's terrifying. I don't want my kindergartner on Prilosec forever, but I'm also worried about the long-term effects of untreated acid reflux. Part of me wishes so much that I would've pushed harder to get help when she was a baby. Could we have healed her acid reflux soon enough when she was a baby? Would probiotics have helped? Would cutting out gluten have cured it? I know that I can't beat myself up about something that was in the past, but still, I wish that I would've advocated more for my daughter back then, just in case it would have made a difference in her health today.

More Like This
The Covid Vaccine For Kids Under 5 Has Been Sent To The FDA For Review
Here's Why Wearing Long Sleeves In The Summer Can Be Good For Your Baby
Should You Swaddle Your Baby In The Summer? Here’s How To Dress Them
How To Breastfeed A Baby With A Cleft Lip Or Cleft Palate