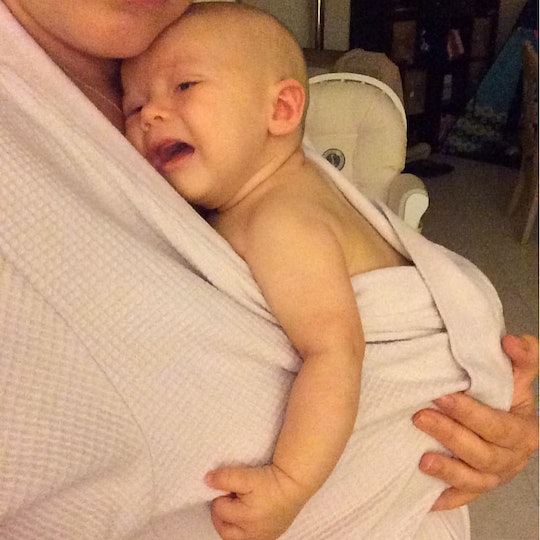 My Baby Has Colic & This Is What It's Like

Colic. Where do I even begin? If I had to sum it up, I'd say having a baby with colic is exhausting, frustrating, infuriating, and overwhelmingly heartbreaking. Watching a helpless little infant — your helpless little infant — cry incessantly for what seems like hours on end can make you feel like the most helpless person in the world. But, my definition aside, the Mayo Clinic defines colic as "a frustrating condition marked by predictable periods of significant distress in an otherwise well-fed, healthy baby. Babies with colic often cry more than three hours a day, three days a week for three weeks or longer." Our daughter was doing exactly this, and just like the definition from the Mayo Clinic goes on to say, it seemed that there was nothing we could do to help.

I read a statistic from the American Pregnancy Association that 20-25 percent of babies meet the criteria for colic. You think maybe it's just a bad night, or a growth spurt, and it will pass in a day or two. I certainly thought that way. But then one day turns into two, then three, and the next thing you know, it's been weeks filled with crying — so much crying, in fact, that you don't remember the sound of silence anymore. And you can try everything, but there's nothing that can help.

The first night with our new baby was just like it had been with our eldest child: She slept quietly and only woke to breastfeed before dosing back off again. I had her on me skin-to-skin in the hospital bed so that it'd be easier for us both to find rest, and if I needed to get up her father would take her. And I was right. But truth be told, after I had hemorrhaged shortly after giving birth to her, I was so grateful to be alive that I found it hard to let go of her.

No matter what I tried, nothing worked.

We brought her home the next day and we had a cranky first night together. She cried so hard that she fell asleep from exhaustion. I tried everything to get her to calm down, all of the tricks I'd learned with my daughter. I wore her skin-to-skin again, I tried to breastfeed her, I walked around with her, bouncing up and down and patting her back. But nothing work. I checked her diaper, thinking maybe she needed a change, but there was nothing there. No matter what I tried, nothing worked. I felt helpless and frustrated — what more could I do for her that I hadn't already tried?

After that first night, we slowly fell into a routine. Her crying episodes weren't as bad as they'd been that first night, so we thought we were in the free and clear. Then, around the second or third week, it started again. The inconsolable crying started up almost every single night, always in the evenings. I'd start making dinner and by the time we were ready to sit down to eat, her fussiness would start all over again. I'd have to breastfeed her while my husband ate dinner quickly and then we'd switch so he could relieve me for a few minutes. She seemed to be only somewhat content as long as she was being held, primarily by me, or being walked and bounced around by her father.

As hard as it was on me, it was harder on my husband. Liberty seemed to not want anything to do with him most of the time. He'd take her from me to give me a break, bounce her and even try to offer her a bottle of expressed milk, and nothing would work. She'd only slightly calm down with me, but barely. And in his arms, her cries only got worse. Most nights ended with her crying till she fell asleep in my arms, or until she calmed down enough to take a breast and then fell asleep. Having read that there's no cure for colic (except to treat the symptoms contributing to a baby's fussiness), I didn't rush Liberty to the doctor for answers immediately. I knew that even if she had been diagnosed with colic right after we took her home, there wasn't much our doctor could give me to help us through it.

As a mother, it really threw my confidence off. I never thought one of my babies would get colic, and I never understood how helpless you could feel being in a situation like that until it happened to me. I literally thought I could help her no matter what, and that all she needed was me and she would be better. But I was wrong. Nothing helped. Even though I think my presence soothed her, I'm not sure any other help I tried to offer her did.

There were nights that I'd rock with her on our glider when she'd be crying and I would be too. I'd always considered myself extremely patient person and parent, but there is only so much crying even a patient person can take. Even though I knew it wouldn't help, there'd be times when I knew need to hand her off to my husband so that I could take a moment to myself and collect my sanity. I'd pray to God to help me get through it, to not let my thoughts get dark, because I could feel like I might very easily fall off the ledge into depression. Having suffered from prenatal depression in my pregnancy, my chances of postpartum depression were even higher, and having a baby with colic wasn't helping the cause.

When friends and family would ask how Liberty was doing, I'd tell them she was "fussy," because I didn't want to admit it was colic. I felt like if I admitted to that, it might somehow make what was happening to her my fault, like there was something I'd done to contribute to it. But when we went to her two-month checkup, I told the doctor what had been going on, and she confirmed what I'd feared: Liberty had colic. No if, ands, or butts about it. Though the doctor's confirmation didn't exactly make me feel better, it did reinforce the fact that as her mom I'd done nothing wrong, and if we could just weather the storm, we'd all make it out on the other side.

Our doctor didn't offer much advice other than encouraging us to tough it out till it was over, but though my own research I learned there are things you can try to help curb their crying fits from happening. Since I'm breastfeeding, I decided to do an experiment with my diet to test whether or not she had a sensitivity to dairy, which can be a major contributing factor to her crying fits. So I tried it, and I found that her mood drastically improved after only doing it for a couple of weeks. But to see if dairy was an issue, I ate a cheese pizza one night, and sure enough, the next day she had one of her episodes. So I decided to go dairy-free until she's at least six months, which is when many babies with this type of issue tend to grow out of it.

As a parent with a colicky baby, I wish I'd known that there is a light at the end of the tunnel. I wish I wouldn't have beat myself up in the beginning over something that wasn't my fault. I don't know why I felt such self-doubt and shame over something I couldn't control. I can only say that maybe it was just another part of the infamous mom guilt we all tend to experience from time to time. To be honest, I also wish that I wouldn't have been in denial over something that is very common. I should've reached out sooner to the moms I knew who'd gone through raising a colicky baby for comfort and encouragement. But now I know better, and I hope that one day when a friend goes through the same thing, I can be there for them and show them the solidarity in motherhood that I was shown when I finally admitted what we were going through.