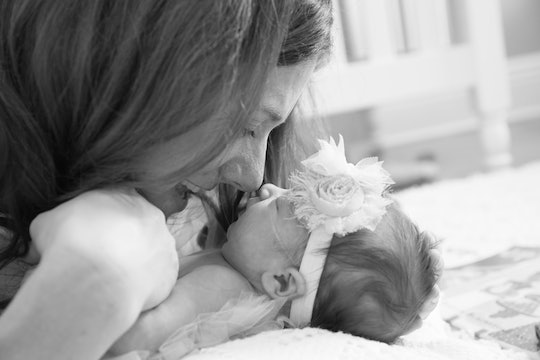 My Baby Hates Breastfeeding, & I Really Can’t Blame Her Because I Don’t Love It Either

When I was pregnant, I’d occasionally be asked whether or not I planned to breastfeed. Personally, I thought it was  a strange thing to small-talk over, but hey, mom stuff is inherently personal and completely out in the open for public discussion, apparently. And while I knew that there were some very strong opinions from pretty much everyone over the issue, I gave it very little thought. My response was always along the lines of, “I plan on it, but we’ll see if I’m able to,” or “I’d like to, ideally, so here’s to hoping!”

I never thought it’d be an issue. Almost every friend of mine had breastfed for months on end without batting an eye. We’d be hanging out, chatting about Scandal, and all of a sudden, there’d be a boob in the mix. I really just figured I’d be another one of the hundreds of millions of women who came before me that whipped it out on a moment’s notice to feed her hungry infant.

Then I had my daughter, and a few hours later we mutually decided we both hated my breasts and everything they stood for, agreeing to our unspoken understanding that I wouldn’t make her suffer the frustration of unsuccessful breastfeeding (and of course, I wouldn’t let her starve). So I learned how to pump, ordered a bunch of formula to be shipped to our apartment, and let the nice ladies in the hospital nursery bottle-feed her each night so we’d both sleep more soundly.

While in the hospital, a lactation consultant came into my room to see how I was doing with breastfeeding. “Not very well, actually…” I said, guiltily, trying to hide the bottle of formula sitting next to my bed while my daughter slept, full-bellied, in my arms. “Well let’s see, shall we?” she asked, motioning for me to whip it out, apparently wake my daughter, and show her how awful we both were at this thing neither of us really wanted to do. “Oh, you have short nipples.” She stated matter-of-factly. Wait, what? Is that a thing? I mean, we just met! Maybe buy me dinner before critiquing my body, OK? But I just laid there sheepishly, agreeing that it must be my weird body that was causing these issues, and I answered her questions until she left the room.

Did I want to breastfeed my daughter? Yes. Did I try? Sort of. I knew nursing was one of the most important bonding experiences I could have with my tiny child, but what I didn’t count on was that it would turn into one of the largest sources of stress for me in the first few days. I felt nothing but frustration, anxiety, and guilt over not being better at it or feeling like it was bonding me in any genuine way with my baby. I discussed it with my doctor, the pediatrician, and even spoke to a lactation consultant by phone. I continued to pump so I could give her all of the nutrients from my body that I possibly could and would sit there, bottle-feeding her, thinking about how, if this were 100 years ago, she probably wouldn’t survive because I was so ill-equipped to feed her directly from my body.

What kind of mother can’t feed her own child? What kind of mother gives her child a bottle after only a few hours of life, confusing the poor baby about what it should and shouldn't be doing? What kind of mother has short nipples?!  And so then, inevitably, I’d spend at least one of her regular night feedings trying different techniques I’d been taught or suggestions by concerned friends and family. But each time, within five minutes, my daughter would be screaming, I’d sometimes be crying, and the kid needed to eat! So back to the bottle we went.

Even though I was pumping multiple times per day, inevitably, after about seven weeks of that, I started to dry up and she simply didn’t seem to notice. And so, quietly and without much fanfare, I stopped pumping and began feeling a little bit more normal. I wasn’t being milked 10 times (or more) per day and my daughter was packing on the pounds like a champion. The guilt continued, but it was much different than I expected. The whole, “I couldn’t feed my baby if this were 1915” story I kept harping on faded after realizing that it was actually 2015 and I needed to relax. But the guilt over not feeling guilt still resides deep inside, though I’ve never really talked about it until now.

I didn’t want to give breastfeeding nearly two months to really let it “take” for both my daughter and me; I just wanted us to bond. And you know what? We did. That kid is bonded to me like glue and I’m pretty sure she won’t remember that a bottle held by one of her parents fed her, gently, comfortably, reliably, every few hours of her little baby life. She won’t remember that we did, actually, give it a shot and cried for weeks in a row because it didn’t work. I did my job as her mother. I fed her, gave her my nutrients and the nutrients from the formula, and she was healthy and thriving. Her pediatrician even said so.

Which, I think, is the message we need to send to women with kids: You’re doing just fine. Are you feeding your child breast milk or formula that agrees with his/her tiny little digestive system? Great, check that box and move onto worrying about your body, showering, hormones, diapers, your career, your friends, your partner, and figuring out how on earth to clip tiny baby fingernails. Because new motherhood is overwhelming. It’s tiring. It’s exhilarating. It’s emotional. And telling women that if they don’t bond-by-boob they’re failing somehow is just unnecessary. Trust me … you’re doing just fine.